If you rocking a Kaby Lake or Ryzen chip in your PC, it’s probably time to upgrade to Windows 10.

Microsoft will no longer push updates to your PC if you are running Windows 7 or 8.1 with the latest chips from Intel, AMD, and Qualcomm (as Ars Technica first reported). The company had announced that it would pull the plug on updating those legacy operating systems for modern CPUs, and it explained that this is because the chip manufacturers designed their silicon specifically for Windows 10. This doesn’t mean that the updates wouldn’t work — they likely would, but Microsoft won’t even give you the option to install them. 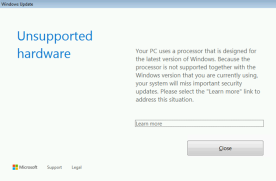 If you do attempt to update Windows 7 or 8.1, you’ll get an “unsupported hardware” error message.

“Your PC uses a processor that is designed for the latest version of Windows,” reads the warning. “Because this processor is not supported together with the Windows version that you are currently using your system will miss important security updates.”

Blocking updates is unlikely to cause widespread issues. Gamers, photographers, and video editors — the people who are typically the most likely to upgrade to the latest CPUs — are probably running Windows 10 because of its support for advanced graphics features like DirectX 12. But here is a list of chips that Windows 7 and 8.1 won’t support moving forward:

Microsoft is also planning to drop support for 6th Generation Skylake processors in the near future unless you are on Windows 10.

But while most people won’t have to worry about this, and Microsoft warned it would happen, it still seems rather sudden. Microsoft is still supporting Windows 8.1 with major updates through next year, so this move may come across as an effort to push stragglers from Windows 7 and 8.1 onto Windows 10.