It’s time to head back to a galaxy far, far away. Electronic Arts and developers DICE, Criterion, and Motive revealed Star Wars: Battlefront II at the Celebration event for fans in Florida today. The game launches on November 17.

It was one of the poorly kept secrets of the week, as the Battlefront II trailer leaked a few days ago. EA followed up the leak with a release of a 30-second spot, teasing a longer trailer. And now, EA executives have described the game and released a full trailer.

With the single-player campaign, EA says you can “Forge a new path as Iden Versio, commander of Inferno Squad—an Imperial special forces unit equally lethal on the ground and in space. Encounter many of Star Wars ‘ greatest characters in a story of revenge, betrayal, and redemption that spans 30 years.”

The speakers from EA got huge applause when they walked on stage in front of the huge group of fans.

“It’s one of the most ambitious games EA has ever done,” said Matt Webster, general manager of EA’s Criterion game studio.

Bernd Diemer, creative director at DICE, said “What stood out for everybody is that anyone can be a hero.” 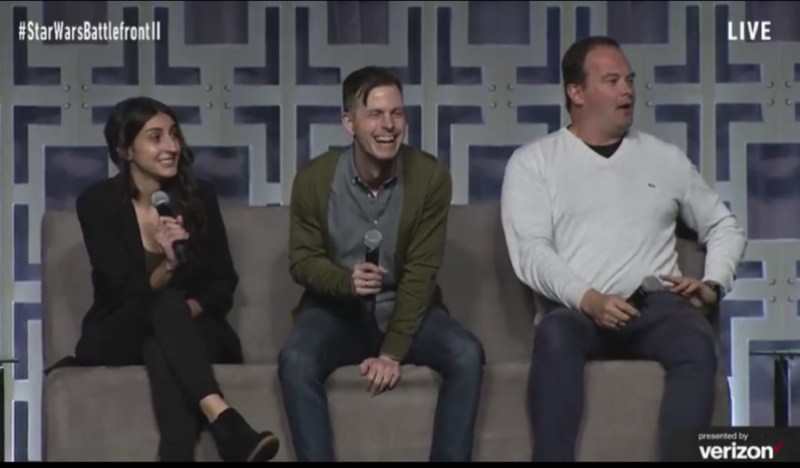 Above: EA developers from Motive and Criterion studios.

Paola Jouyaux, producer at Motive in Montreal, said that there is a new planet, a homeworld for Versio, with a variety of locations and urban environments. You can play a variety of characters, such as a Jedi. And you can step into the shoes of various iconic characters.

You’ll be able to fight on the ground or engage in giant space battles. The game will span locations across all eras. You can join up to 40 players in multiplayer, and revel in deep class-based online gameplay. You can pilot a wide variety of land and air vehicles, and control iconic characters with distinct abilities that can turn the tide of battle. 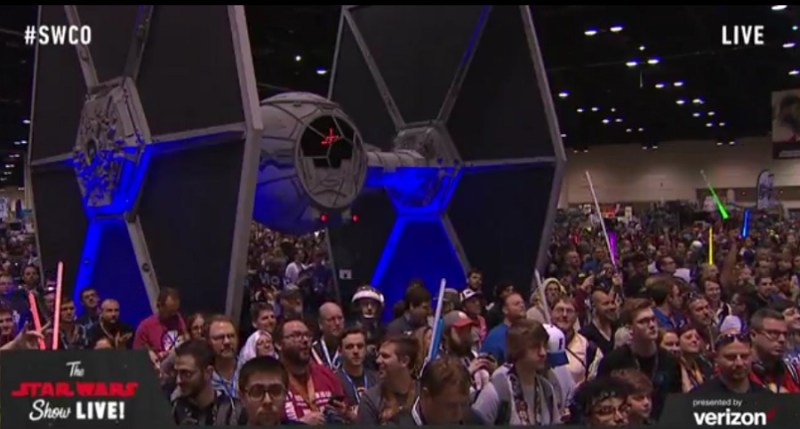 Above: Fans at Star Wars Celebration.

One of the hallmarks of Battlefront is its promise that you can play anyone in the Star Wars universe. That seems to be the case, as you can see Rey and Kylo Ren from Star Wars: The Force Awakens and Darth Maul from The Phantom Menace.

EA also says you can play as—and against—Star Wars’ most feared villains and cherished heroes from all three eras, including Yoda, Luke Skywalker, and many more. Each characters has unique, upgradable abilities ensure classic characters bring their distinct powers and personality to the battle.

And while the first game was a multiplayer title, Battlefront II will include a single-player campaign. The original Battlefront game came out in November 2015, and it sold more than 14 million units in its first six months.

You will be able to team up with a friend in two-player offline split-screen play on the consoles. And you will be able to earn rewards, customize troopers and heroes, then take your skills and upgrades to the online battleground.

EA says you can tailor unique abilities for each hero, trooper, and starfighter to gain the upper hand in battle with Battlefront II’s diverse and powerful progression system. The path to victory is yours to decide.

“These moments are truly your own moments,” Diemer said. “Nobody else will experience it exactly like that.” 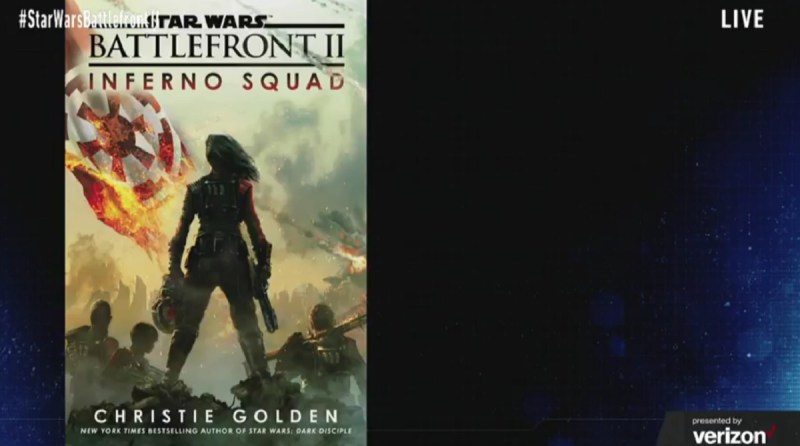 Above: A novel based on Battlefront II

The game is clearly a bigger effort than the original, with DICE, Motive, and Criterion all contributing to it. You can pilot a First Order Tie Fighter in dogfights.

In the trailer, Versio says, when asked what her Stormtrooper squad will do now, “Avenge our emperor.”

“In Star Wars Battlefront II, we all wanted to really capture the essence of being heroic and how in Star Wars, anyone can become a hero,” said Webster, Executive Producer at Criterion. “Whether that’s playing as an iconic character like Rey or Luke, as a front-line trooper or fighter pilot in epic multiplayer battles, or playing through a new Star Wars story that bridges the gap between Star Wars: Return of the Jedi and Star Wars: The Force Awakens, you will become a hero in Star Wars Battlefront II.”

The story takes place in the 30 years between the destruction of Death Star II and through the rise of the First Order. The single player story introduces Versio, the leader of Inferno Squad, an elite special forces unit of the Galactic Empire, who are equally lethal on the ground and in space. 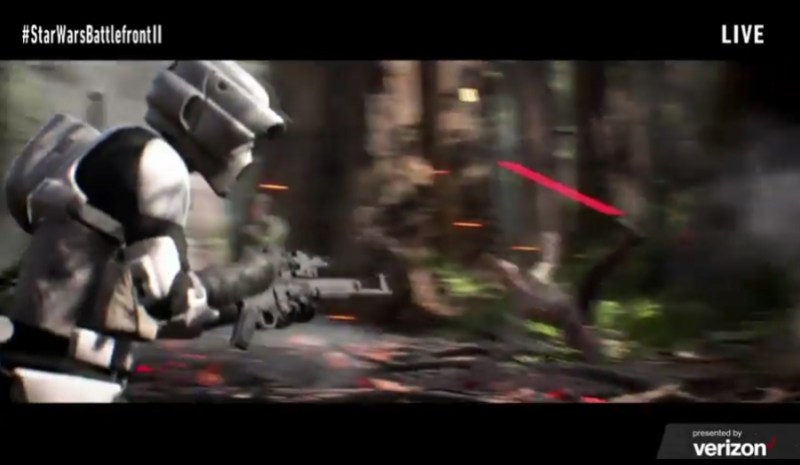 “EA has assembled an incredible set of developers to create a Star Wars gaming experience unlike anything fans have ever experienced,” said Douglas Reilly, Senior Director, Digital & Franchise Management. “Star Wars Battlefront II will offer everything players loved about the last installment, and adds new modes that we know the fans want, including an entirely new story developed in partnership with Lucasfilm.”

“We wanted to create a campaign that told a story we haven’t seen before in Star Wars,” says Mark Thompson, Game Director at Motive Studios. “It was important for us to tell a new authentic story, one that gives players a brand-new perspective. By putting players in the boots of an elite member of the Imperial forces, we can show them what the battle was like from the other side.”

Locations include Yavin 4’s jungle canopies, the spaceport town of Mos Eisley, and Starkiller Base. Players can choose from an array of land and air vehicles and master their own hero’s journey, with customizable character progression across heroes, villains, troopers and starfighters.

Additionally, when taking the fight to space, players can upgrade to the Star Wars: The Last Jedi Millennium Falcon and a new First Order ship.