I love adventure games, but I’m not really into the whole Telltale thing.

I grew up with the likes of Monkey Island, Day of the Tentacle, and Grim Fandango — adventure games that were about exploration, collecting items, and solving puzzles. Developer Telltale Games has evolved the genre, starting with its hit The Walking Dead series, focusing instead on story, conversations, and player choices. And while these games have their fans, I find them unrewarding and dull. The same holds true for Telltale’s new Guardians of the Galaxy series for the for PlayStation 4, Xbox One, PC, iOS, and Android. The first episode is Tangled Up in Blue, and I played the PC version.

I hadn’t tried a Telltale game in some time, so I was curious if trying the developer’s efforts with such a hot brand could turn my opinion. But its take on Guardians of the Galaxy is a textbook example of a Telltale game. Action scenes only involve you pushing occasional button prompts, with most of the actual gameplay revolving around talking to people and seeing the consequences of your conversations and decisions (Gamora will remember that).

If you dig the Telltale brand, I’m sure this first episode will give you an enjoyable few hours. But I’m still not a fan of the Telltale style. 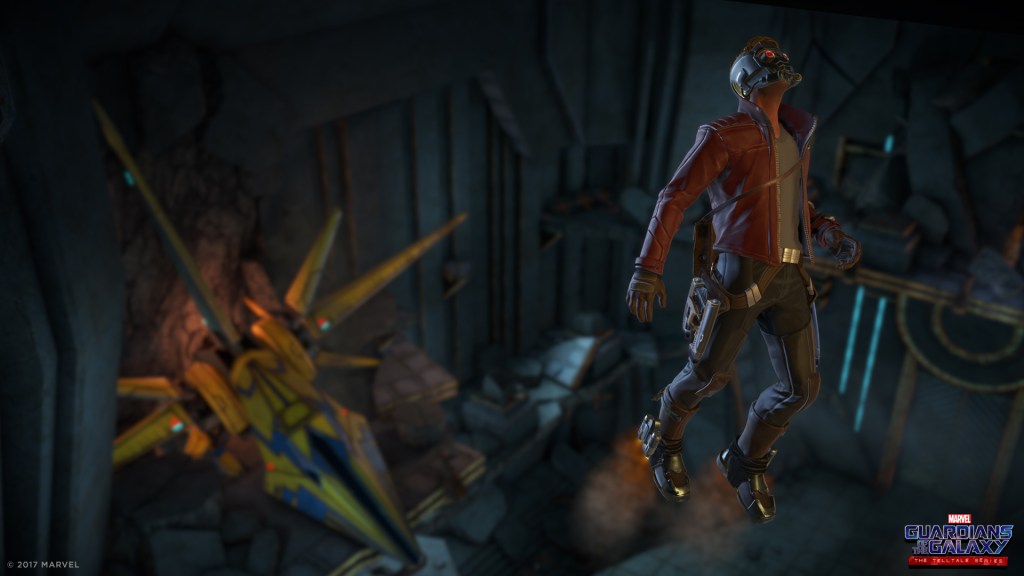 Being your own Star-Lord

You play as Star-Lord, the human leader of a spacefaring mercenary group. Through dialogue options, you decide what kind of person Star-Lord is — if he cares more about money, doing the right thing, or camaraderie. And while Star-Lord will always be a sarcastic hero, you can choose how sarcastic he is. If you decide a situation is serious enough, you can opt for more sincere dialogue.

You’ll also have to make harder decisions that will upset some of your teammates. While the choices are still binary, they’re more interesting than a traditional “good guy/bad guy” system. Most options aren’t right or wrong, they just have different consequences. 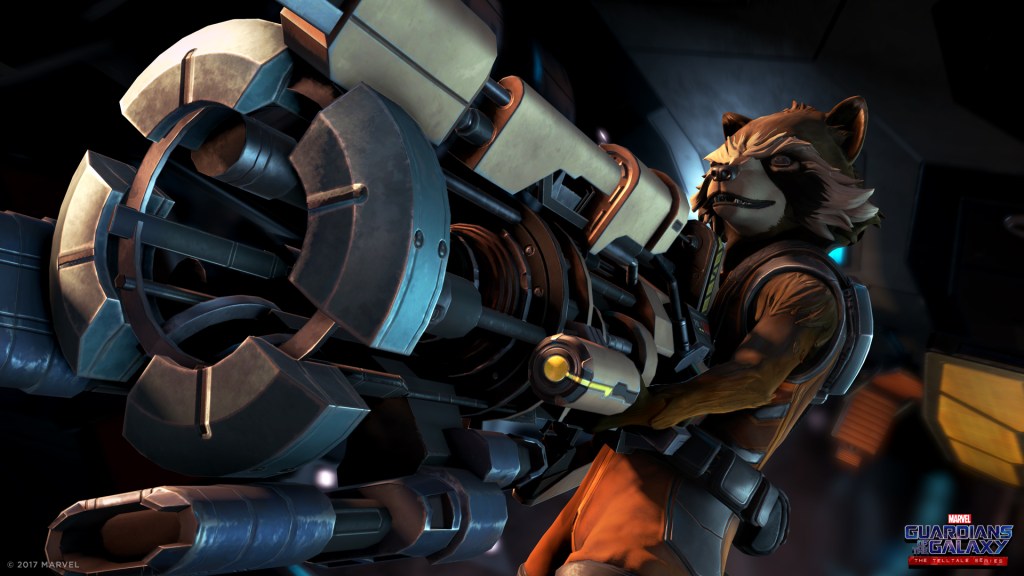 The Guardians of the Galaxy are a big deal these days. The first movie surprised everyone, endearing fans with its humor and heart while making tons of money. The sequel comes out on May 5. It seems like an ideal comic book property to get the video game treatment.

The problem, however, is that Telltale’s version is based on the comics that inspired the movies, not the films themselves. Not that it doesn’t take inspiration from the movies — it takes plenty. Some of its interpretations of characters are pretty much copies of their screen versions. Drax doesn’t understand metaphors, for example, and Yondu has a similar Southern accent.

But the game only resembles the movies until, well, it doesn’t. Rocket and Groot look pretty similar to their movie counterparts, but Drax and Gamora look much more like the comic book versions. And then you have the moments where the careful tip-toeing around infringing on the film’s original ideas becomes distracting, like when Star-Lord has a cassette tape labelled “Rad Mix” instead of the iconic “Awesome Mix Vol. 1.”

It feels like Telltale, despite not actually working with the film license, wanted to make something in that universe anyway. So Star-Lord’s outfit and helmet look exactly like the movie’s, but his face is distinctly non-Chris Pratt. The writing and acting are trying to channel that sarcastic, family-nagging tone, but it feels like an imitation. 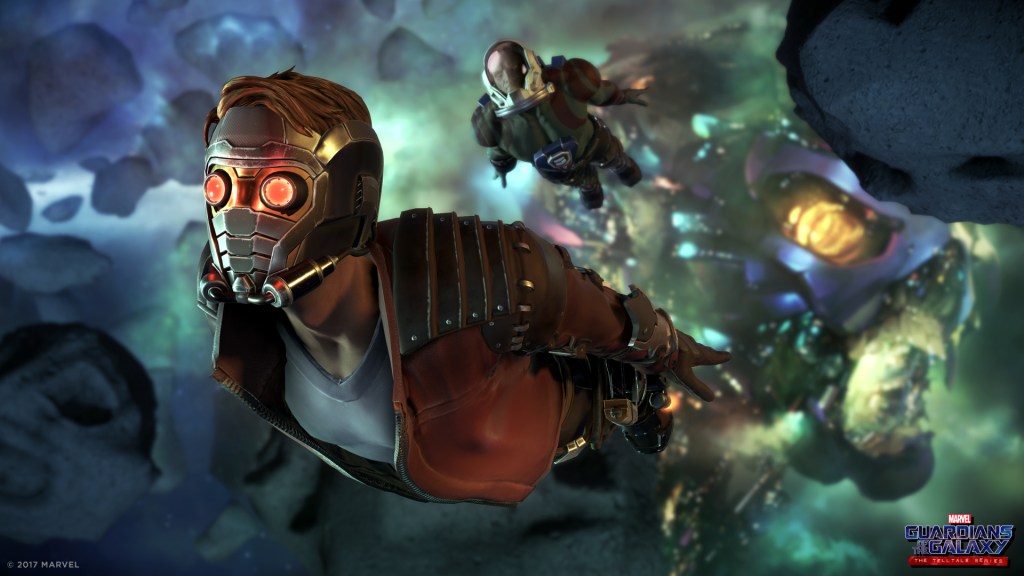 Quick-time events instead of real puzzles

The gameplay in Guardians of the Galaxy comes in three parts: action scenes, talking to people, and problem-solving. Talking to people takes up most of the experience. You’re usually chatting with your teammates, solving their quarrels, learning more about them, and progressing the story while establishing the personality for your version of Star-Lord. It’s the part of the game with the best execution. These are likable characters, even when they come off as imitations of their film counterparts, and their family-like bond gives the otherwise standard comic book story some interest.

The action scenes are the next most common. These are like little movies where you’ll occasionally have to press specific buttons when they show up on the screen. You’ll have to push the left arrow to avoid a laser, for example, or E to swing your sword at someone. While the scenes themselves can be interesting, they aren’t challenging. These kind of quick-time events represent interactivity in its shallowest form.

Problem-solving is the least common activity — and the most boring. A couple of times you’ll be in a room that you can freely walk around. You’ll have an issue, like a locked door, that you need to fix. But you’re not really solving a puzzle. You’re just walking around until you find the right thing to click on. There aren’t that many things to click in the first place, and anything that you can interact with has an icon over it, so this doesn’t take very long. 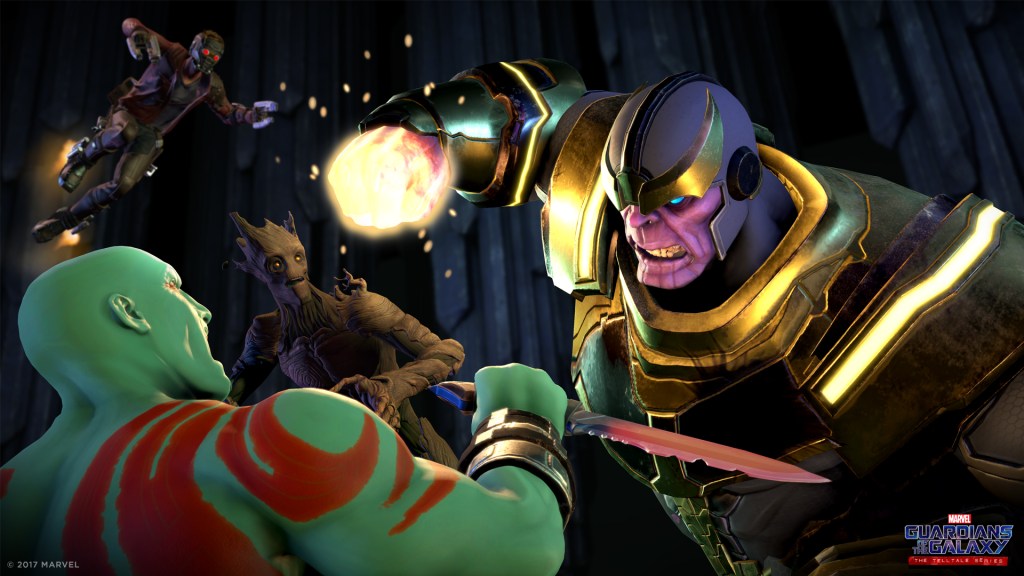 Above: You don’t need to wait for the next Avengers to see people fight Thanos.

If I really want a good Guardians of the Galaxy experience that last a couple of hours, I’ll just watch the first movie. Tangled Up in Blue tries hard to capture the magic of that film, and sometimes it can come close, with funny lines and amusing interactions between its characters. But it always feels like an imitation.

But even taken as a game outside of the Guardians franchise, the experience doesn’t offer enough excitement. It’s an interactive story, a choose-your-own-adventure visual novel with tired quick-time events and nothing resembling an actual puzzle. It’s a series of choices, and the fun (I imagine) comes in seeing how those choices play out.

But in the first episode, you only get a small taste of that. Maybe I’ll understand the impact of my decisions when the story progresses further in later episodes, but this first chapter casts a dull light that’s lost in the eclipse of its big-screen brother.

Marvel’s Guardians of the Galaxy: A Telltale Series — Tangled Up in Blue is out now for PlayStation 4, Xbox One, PC, iOS, and Android. The publisher provided us with a PC code for this review.