Among all the professional franchises in esports, Evil Geniuses is No. 1. To date, its teams have won $15.4 million from 632 tournaments.

The Oakland, California-based operation has its Dota 2 team to thank for this. The popular multiplayer online battle arena game accounts for nearly 90 percent of Evil Geniuses’s total earnings. The second highest-grossing team is the China-based Wings Gaming, which has $9.7 million from 21 tournaments. These rankings come from the Champions of Esports report, a new study from gambling platform Unibet.

These findings reflect the exponential growth of esports in recent years. According to intelligence firm Newzoo, it’s a business that will generate $696 million in revenues in 2017, a number which includes marketing budgets, sponsorships, media rights, tickets, and merchandise.

Due to Evil Geniuses’s dominance in Dota 2, almost all of its players occupy the top slots in Unibet’s list of the most successful players in the world. They’re also some of the highest-earning male players in the business. 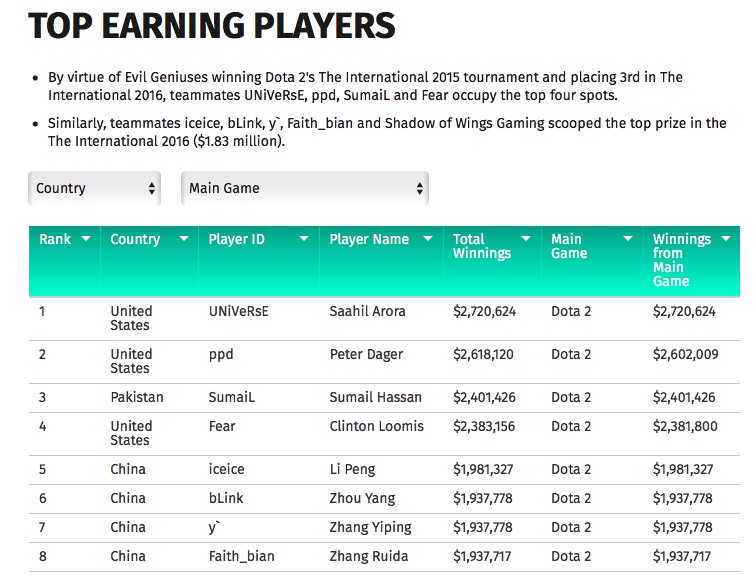 Above: The top earning players graph from Unibet’s study.

In contrast, the highest-earning woman — Sasha “Scarlett” Hostyn — earned $171,000 from playing sci-fi strategy game StarCraft II. The huge difference from No. 1 male player Saahil “Universe” Arora isn’t a surprise. Winnings fluctuate wildly depending on the game, and Dota 2 tournaments are known for their lucrative prize pools (The International championship alone awarded over $20 million to teams in 2016, a combination of funds from developer Valve and from the community via in-game transactions).

For both sexes, however, Unibet concluded that 25 is the “most lucrative age” in esports. Profits sharply decline for players in their 30s. 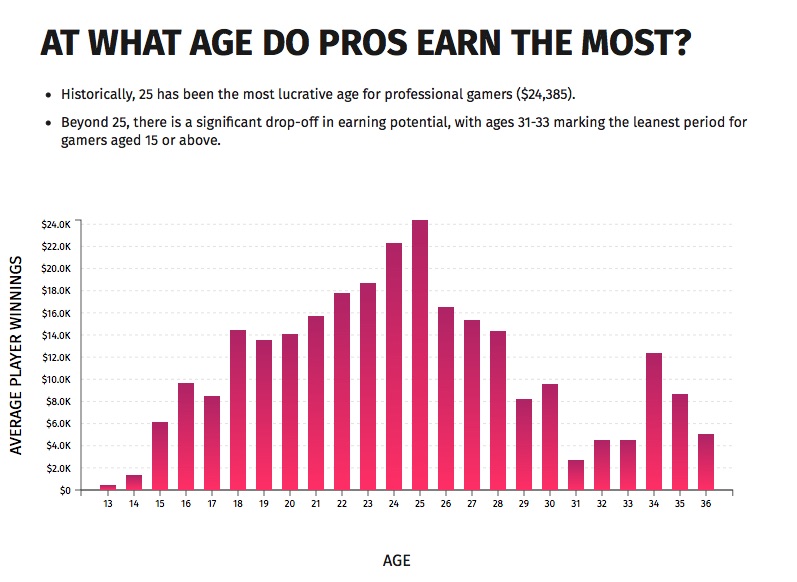 Above: Esports is a young person’s game.

And of all the countries in the world, the U.S. has the most active players with 2,891, with China (1,001 competitors) in second place. However, China beats the U.S. when it comes to overall winnings. Chinese teams earned $19.4 million, while American teams top out at $14.7 million.

Unibet gathered the data from statistics site Statista, the TeamLiquid esports wiki, Esportsearnings, Newzoo, and streaming platform Twitch. You can check out the rest of the study here.