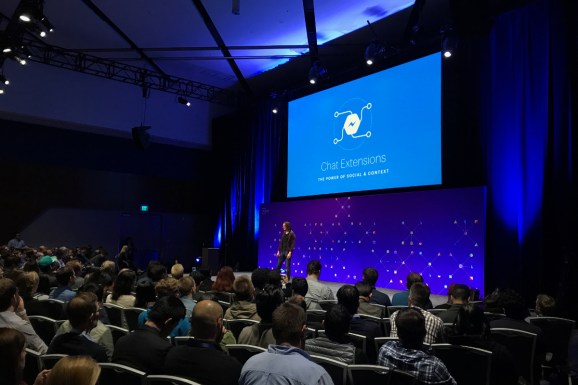 Yesterday at its annual F8 developer conference, Facebook launched Messenger Platform 2.0, and discovery was the main theme, with the addition of new features like chat extensions and bot recommendations by Facebook’s intelligent assistant M. With chat extensions, bots finally gained the ability to interact with people in a group setting.

Bots can now be shared in a single chat thread or broadcast to groups of people, but Messenger bots in groups cannot talk to you, crack jokes, or be conversational in any way you might think bots can.

With platform 2.0, bots don’t chat. They appear in webview as chat extensions. A graphic interface is extremely flexible and can look better than plain text, but the tradeoff is no natural language processing in the bot. That means anytime a bot is in chat with two or more people, it cannot listen to your words or speak to you, characteristics heavily associated with bots.

“Chat extensions do not listen to your messages,” Larionov told a room of a few hundred developers in a session Tuesday. “You cannot @ mention them. Instead, we are going all-in with webviews. Why? Because we want to reach user input and text is very limiting. We also don’t want bots to have access to your private conversations, and we don’t want to pollute your conversations with bot commands.”

Losing the ‘chat’ in chatbots

Whether you see it as a good or bad thing, the removal of NLP in chat extensions moves Messenger even further away from the chat in chatbots. A similar change occurred in March when Messenger transitioned from 1.3 to 1.4. Then developers were given the choice of whether or not to display a text input field in their bot.

“We’ve built a really powerful conversational mechanism with 1.0 and we never really paid too much attention to the structure,” he told VentureBeat after appearing onstage. “So now we are kind of catching up on that front. It’s always this dual hybrid model when you have bots. The combination of that really works best.”

Waylo is a bot that helps people find hotel deals. Founder and CEO Angik Sarkar attended both F8 functions with “bots” in the name Tuesday. Given the undelivered promise of bots that hold a conversation, he understands why Facebook took another step back from NLP, but he’s disappointed in the new forms of discovery and that bots will not be able to talk in groups. The removal of NLP from bots in groups scraps a bot wow factor. NLP bots may make mistakes, but webview can’t get smarter over time like NLP can.

“It’s a web app inside Messenger. That’s how I’d put it. It’s like they’re taking a core of a bot from a bot,” Sarkar said. “It’s not a bot anymore because it’s not listening to what a user is saying except for input you could have entered on a web page.”

Tuesday also marked the first day of bots on Workplace by Facebook and its chat client Work Chat. Most bots on Slack, Cisco Spark, Microsoft Teams, and other platforms are able to speak to groups.

Kip is a bot that lets groups buy things, from offices ordering supplies or lunch together to a family who can shop together with the Kip bot. On Slack and Kik this is possible. Until today, it wasn’t possible on Messenger.

“Our core strength and focus is coordinating teams, and we couldn’t do that in the current state [of Messenger], so that’s why Kip on Messenger is really more for fun/quiz aspects and not very useful,” she said in a conversation before the launch. “If Messenger opens up to allow bots to interact and participate in group chats, then we could start working with informal teams and organizations to help them with collecting requests and coordinating group social buying.”

Mikael Yang is also happy about new additions for discovery and the group chat function. Yang is CEO of bot creation platform ManyChat. More than 20,000 bots have been created with the platform.

“The platform is open, but it’s not a free-for-all because then you’re not controlling the platform. Then you’re just a dumb pipe,” he said. “There has to be a balance between giving developers the tools and to build amazing things for the platform but then not exposing too much of the user info to developers because that can be misused.”

Bot developers who are concerned about a lack of listening or NLP in groups can still enjoy both features in one-to-one conversations, Yang said.

GameOn CEO Alex Beckham told VentureBeat last summer that he was anxious for Facebook to add group messaging to its bot offerings. When GameOn released its Sports Illustrated Rio 2016 bot, it found engagement highest on platforms that allowed groups to chat alongside a bot. In the same way the removal of NLP is good for Kip, it’s bad for GameOn, whose sports bots interact with groups. Still, Beckman said he and his team are excited about the amount of thinking Messenger has done about monetization opportunities that come with new forms of discovery. The parametric code at a local sports bar, for example, has a lot of potential for promotion, engagement, or sales.

“Nobody buys one ticket to a game. It’s more fun to have a group of buddies. We’ll get there,” he said. “Ultimately we think the best bot experiences are going to be enjoyed by groups of friends. That’s where we want this to head, but at the same time I’m excited by what came out.”