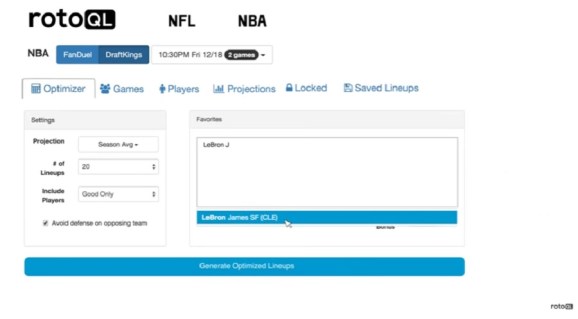 RotoQL is announcing today that it has raised $1.2 million in seed funding to solve a very practical problem for the millions of people who play daily fantasy sports.

Daily fantasy sports became a $3 billion business in the past couple of years (according to analyst firm Eilers & Krejcik Research) as companies like FanDuel and DraftKings made it easy to go online or use your smartphone to compete in a social way in fantasy sports contests where you can win cash prizes. The problem is that many people don’t have the time to create their best possible teams. An estimated 57.4 million people played fantasy sports in 2015 in North America, according to the Fantasy Sports Association.

New York-based RotoQL hopes to level the playing field by presenting data in a way that makes the choices a lot easier for casual fans to be competitive with more advanced fans. It’s like an “all-in-one daily fantasy sports workstation,” the company says in its video.

The funding comes from Boston Seed Capital, Jason Robins (founder and CEO of DraftKings) and Saahil Sud, the No.-1-ranked daily fantasy sports player. The funding will accelerate the already profitable company with essential tools for consumers in daily fantasy sports, as well as build and market a similar tool for season-long fantasy.

“RotoQL seeks to build and own the information highway for consumers in the sports vertical,” said Sud, cofounder of RotoQL, in a statement. “Our vision goes beyond just DFS. We also seek to revolutionize and democratize the way consumers access and enjoy sports data, and this seed round will help us get there faster.”

DraftKings and FanDuel have proposed a merger, but some are concerned about antitrust violations. The companies have had their share of legal troubles in different states that consider daily fantasy sports to be illegal gambling, but the majority of states consider it legal.

The problem now is elite players who dedicate countless hours and use automation can win bigger pots. RotoQL helps equalize that with analytics and other tools that show recommended fantasy teams.

“RotoQL launched with a daily fantasy product that empowers players to leverage data and analytics in order to build competitive lineups, and next, the company will build data products for season-long fantasy players,” said Peter Blacklow, managing director at Boston Seed Capital, in a statement. “While there are several large B2B sports data businesses, there is no leader in sports data for consumers — we believe the team at RotoQL will become the Bloomberg data terminal for sports fans.”

One customer, Michael Sugar, an Academy Award winning film producer, said in a statement, “I stumbled upon RotoQL as I started playing DFS, as a hobby. I find the tool to be an invaluable resource for me, and I have generated substantial income ever since.”

Sugar is now regarded as one of the top earning players in the world, and is one of just two players who recently qualified for the World Championship for basketball and hockey at the same time. RotoQL has six employees, and the company believes it will generate seven-figure revenue in 2017.