If you’re going to ask your fans to buy the same game twice, this is the way you do it.

Mario Kart 8 Deluxe is an upgraded version of a racing game that came out for the Wii U in 2014. And it’s great! It’s the most beautiful entry in the series yet, and its introduction of gravity-defying karts make for some of the franchise’s most inventive courses.

But the Wii U is old news. Nintendo now needs software to support its young Switch console. So, instead of building a new Mario Kart from scratch, we get this deluxe version of Mario Kart 8 that includes all of its downloadable content, new battle modes, and some new characters. It comes out on April 28.

That might sound lazy, but I can’t imagine how Mario Kart could be much better on the Switch even if Nintendo made the full jump to a Mario Kart 9. 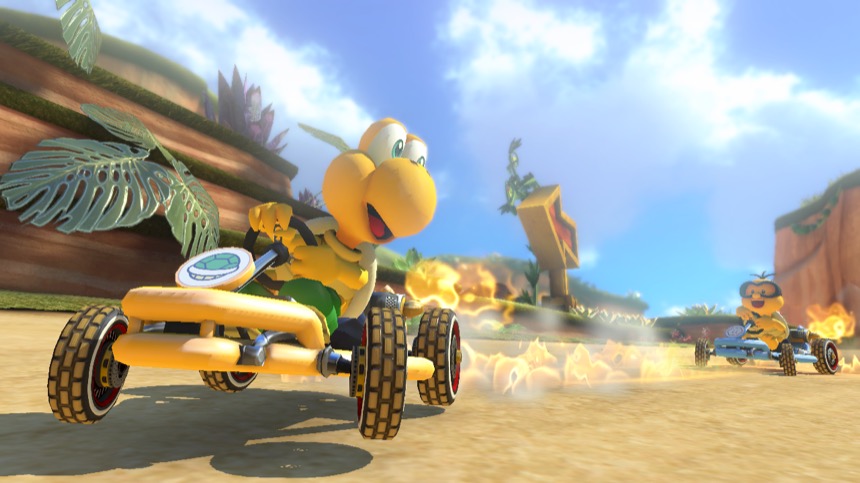 Above: Minions can race, too.

A great game with more stuff

Again, Mario Kart 8 is a great game. It’s the first in the series to show off HD graphics, featuring some colorful courses with a wide range of themes (such a diamond-studded mines and a San Francisco-like hilly city). The game is just as much fun on the Switch.

And it comes with some extra stuff. If you, like me, were too cheap to buy the downloadable content for the original release, you can finally check it all out here. This includes new racers, specifically Link from The Legend of Zelda and some characters from Animal Crossing. The DLC courses also take influence from other Nintendo series. Zelda and Animal Crossing also get tracks, but classic Nintendo racing franchises Excitebike and F-Zero also have their own venues.

But Mario Kart 8 Deluxe also has new stuff. You can play as six new characters: Inkling Boy and Inkling Girl from Splatoon, and classic Mario Kart racers Dry Bones, King Boo, Bowser Jr., and Gold Mario. This puts the roster number at 42, which is an impressive number. I remember when we only had eight characters to choose from in the original Super Mario Kart for the Super Nintendo. 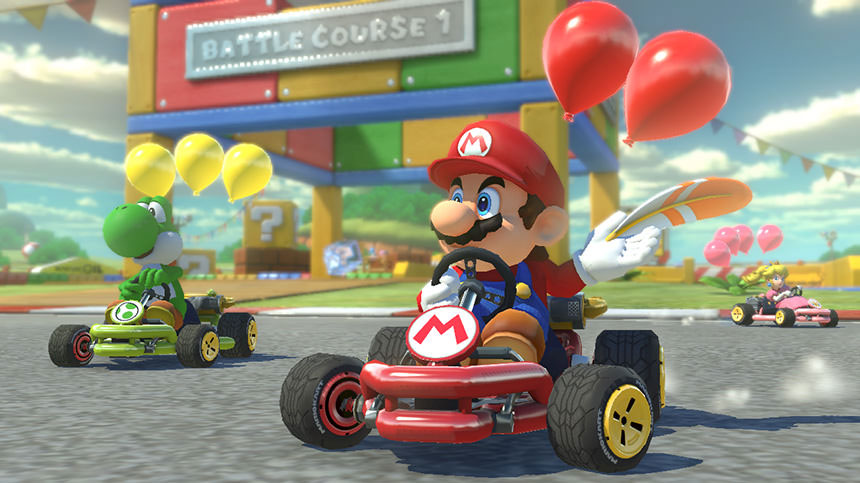 Above: Look out! Mario has a feather!

But the new battle modes are the biggest additions. In fact, in our original review of Mario Kart 8, we complained pretty loudly about the lame take on the series’ staple competitive mode. In most Mario Kart games, you could fight other players in levels made specifically for fighting. Instead of racing, you would gather items and try to take out as many racers as possible, either hoping to get the most points or be the last one standing.

Mario Kart 8 just has you fighting on the regular race courses, which doesn’t work. In order to battle properly, you have to have the players contained in smaller, less linear levels. Mario Kart 8 Deluxe remedies the problem. It now has eight tracks just for battling.

Not only can you go at it with the traditional fights, but you can also compete in some other modes. Shine Thief, for example, has everyone trying to hold onto the Shine item for 20 seconds (which is harder than it sounds when every other player is throwing shells and bananas at you, which makes you drop the Shine). Bom-bomb Blast has everyone battling only with bombs, and Coin Runners task players with gathering the most bling. And then you have Renegade Roundup, a team-based Mario Kart take on cops-and-robbers.

The multitude of modes adds a nice variety, and it’s great fun getting a bunch of friends together for split-screen mayhem. With the original Mario Kart 8, you really only want to race with your friends. Now battling is just as much fun (and more hilariously chaotic). 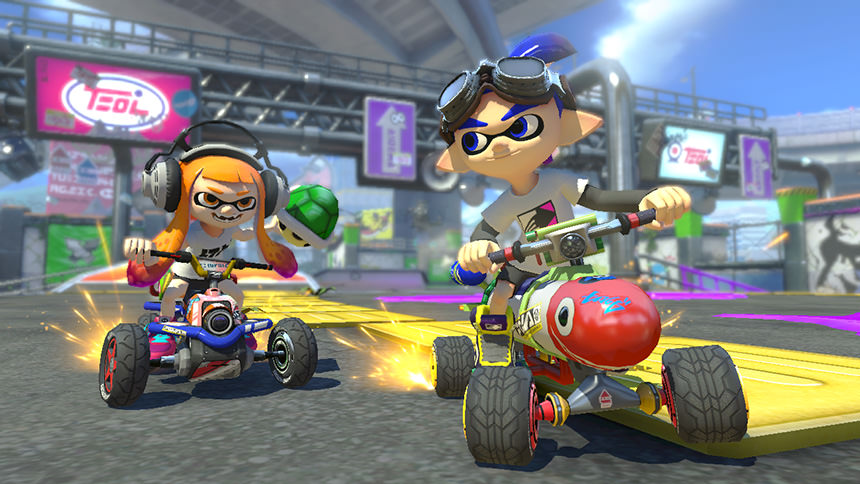 Using a Joy-Con as a single controller

Mario Kart 8 has online play, but come on — this is Mario Kart. The best way to enjoy it is to be with all of your friends in the same room. Unfortunately, this can be a bit difficult.

Unless all of your friends have their own Switch and copy of the game, you’ll need to share one system and TV. That’s fine, but having enough controllers for four people to play on the Switch can be a pain (more specifically, at $70 per Pro controller, expensive). Now, supposedly, the Joy-Cons fix the problem. Those are the controllers that you can detach from the sides of the Switch tablet, turning them each into their own mini-gamepads.

This was my first test using a single Joy-Con as its own controller, and it didn’t feel great. My hand had to crimp around the small device to get my thumbs where they needed to be, and the small shoulder felt unresponsive and loose. It’s a way to get more friends playing on the same screen, but it’s not a great solution. 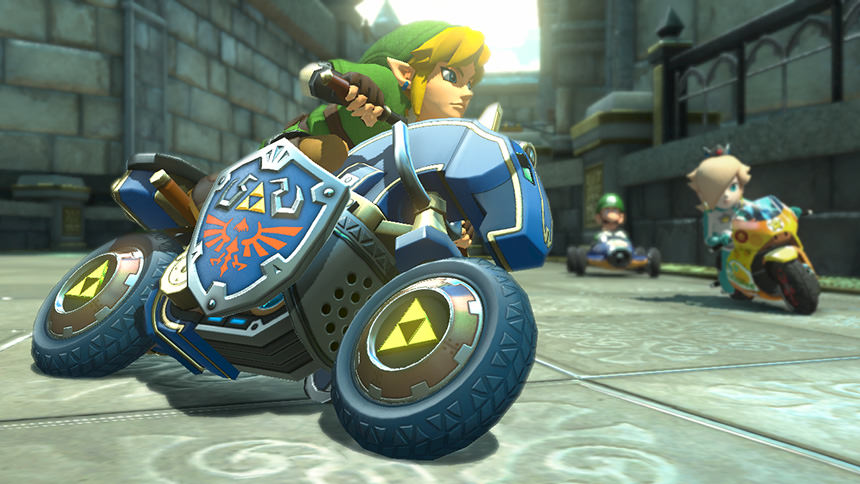 Above: Move over, Epona.

This is how you spiff up an older game. What could have been a cynical attempt to double-dip into Nintendo fans’ wallets actually turns out to be the Mario Kart series’ definitive entry. The racing looks and feels just as great as it did on the Wii U, but the addition of battle modes finally makes it feel like a complete package.

Add in the new characters and the Wii U DLC content, and Mario Kart 8 Deluxe is a fantastic addition to the Switch’s early library.

Mario Kart 8 Deluxe comes out on April 28 for the Nintendo Switch. Nintendo gave us an eShop download code for this review.