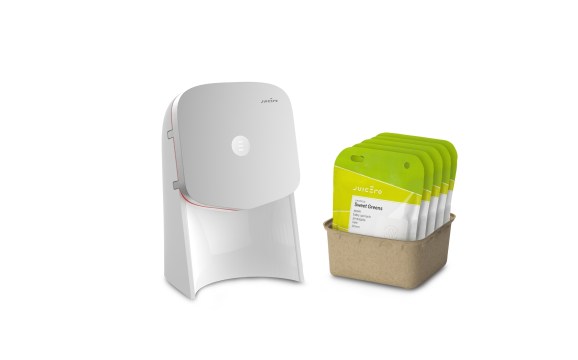 A few months after the former president of Coca-Cola was non-ironically named CEO of the Silicon Valley connected juice presser, he gets hit with a whopper of negative publicity. Turns out rather than buying the $400 juice presser, one can simply squeeze the bags and get the same result.

Now, one could follow the script of say, a Theranos and attempt to insult and bully and discredit the source of a story that has made the company an international laughingstock and the POSTERCHILD FOR EVERYTHING THAT IS WRONG WITH SILICON VALLEY.

One could calmly write a humble-sounding blog post on the job-change-announcement-platform Medium that responds to the critiques and then puts the company’s money where its mouth is by offering full refunds to any dissatisfied customers.

“So when I saw this week’s headlines about hacking and hand-squeezing Produce Packs, I had a one overriding thought: “We know hacking consumer products is nothing new. But how can we better demonstrate the incredible value we know our connected system delivers?” he wrote.

Dunn argues that Juicero is more than a juicer. It’s a “closed loop food safety system” that allows for consistent pressing and collection of big data to manage the whole supply chain, and it’s easy to use so dad doesn’t have to worry about buying all this healthy crap and shoving it in a juicer to make the adult equivalent of baby food while junior is whining and hitting his sister in the high chair, and the result is that dad starts to rethink a lot of his life decisions and starts say hey, maybe, fuck it, I’m quitting that insurance job and going backpacking in Tibet.

Also, Dunn reminds as that there is a HIGHER CALLING, because more and more kids in the U.S. are diabetic fatties, so there needs to be a solution to help people eat healthier. (Did we mention that Dunn used to be president of Coca-Cola? Oh, yes, we did.)

Okay, so, as we said, he gets credit for not being defensive and for saying he wants to learn and that anyone can have their money back. And just in case you need it, here’s a look inside a pouch:

However, the thing about posting this on Medium is that people can comment. And so they have:

“This is everything wrong about Silicon Valley in one note. A sort of unique sense of out of touch that makes people who ship chopped vegetables at 4000% markup think they are changing the world because of a nice looking app . And then they feel appalled that real people don’t see it that way. Please can all these undoubtably smart people, all this silly VC money, go and be used to do something good in the world. And by all means make money in the process. But not this tired shit,” Tom Goodwin.

“Malnutrition and obesity are diseases that disproportionately impact the poor and you solve this by selling a $400 (formerly $699) juice press with $5–8 produce packs?” Tapiwa Muranda.

“I’ve been hacking Capri Suns since I was 5. I am a hacker,” John Miller.

“This is the worst kind of Silicon Valley gaslighting bullshit in recent memory. Congratulations, there’s pulp in your bags. There’s pulp in the hopper of my 99 dollar Breville too, and you don’t generally drink it or squeeze it off. The fact you’re doubling down on how magically special your product is instead of admitting that you misled people is not going to have the intended effect and it’s not going to help calm your investors who justifiably feel ripped off right now,” Karen Geier.

Ok, you get the picture.

“I know this is going to sound strange to many, but you don’t have to buy a Juicero. What are we really getting mad at here? There are industries giving people diabetes. The leader of the free world just invited Kid Rock to the white house. I think we can give Jeff Dunn a pass on selling veggie juice to software engineers.”

The timing of all this was of course a major bummer, because just last weekend the Juicero founder was at Coachella partying with Katy Perry, who was showing all sorts of social media love for this thing:

#VIDEO | "DOUG from @juicero is my hero" from @katyperry's instagram stories pic.twitter.com/p8tBZGVfc4