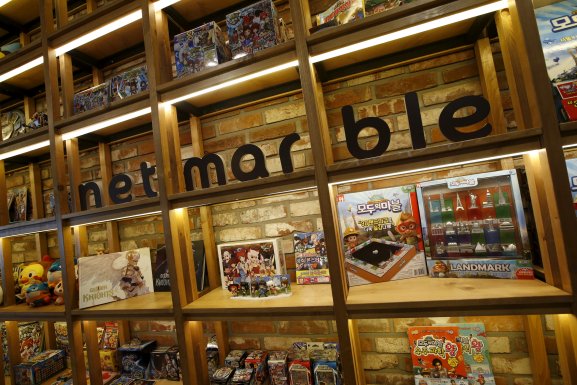 FILE PHOTO: The logo of Netmarble Games is seen at its headquarters in Seoul, South Korea, March 25, 2016. REUTERS/Kim Hong-Ji/File Photo

The firm priced its initial public offering (IPO) at the top of an indicative range as largely expected, analysts said, due to its ability to consistently publish hit games in the highly competitive mobile sector.

Most recently, role-playing mobile game “Lineage II: Revolution”, released in December, was named the world’s biggest earner in February by games data provider SuperData, despite only being available in its home country.

South Korea is the fourth-largest games market after China, the United States and Japan, with annual revenue of about $4 billion, showed June 2016 data from researcher Newzoo.

“The company not only has just released a mega-hit game the likes of which has never been seen in South Korea, but it is seen to have a strong lineup of games coming soon in the mobile games sector, where it’s often a while before a developer releases another game,” said analyst Jang Won-yeol at Shinyoung Securities.

“The amount of shares offered was almost nonexistent compared to demand,” Jang said.

The size of the IPO surpassed the 2.25 trillion won listing of Samsung BioLogics Co Ltd last year, and is second only to the 4.9 trillion won IPO of Samsung Life Insurance Co Ltd in 2010.

The firm, backed by China’s Tencent Holdings Ltd, earlier this week said it planned to use the proceeds, plus cash flow and borrowings, to raise 5 trillion won for acquisitions.

Through acquisitions, Netmarble wants to expand its share of the gaming market in North America and Europe to become a top-five games company by 2020, its founder told Reuters in January.

The games industry has recently seen a series of high-profile mergers and acquisitions as firms consolidate to gain market share.