Mining nostalgia for capitalist pursuits doesn’t always mean bringing back timeless classics. Sometimes it means re-releasing games that only made sense in a certain time and place. The latter option best describes Sony’s latest effort to restore a retro game. 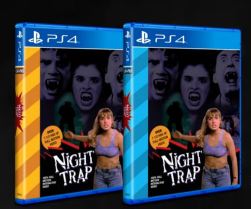 Above: The physical version of the PS4 game.

Night Trap, the Sega CD live-action full-motion video game about a deadly sleepover, is coming to PlayStation 4 before the end of spring, according to Sony and publisher Screaming Villains. It’s the 25th anniversary of Night Trap, and Screaming Villains wants to celebrate that with both a digital and limited-edition physical release of the game on Sony’s console. The disc versions will even have box art that looks exactly like the Sega CD release from a quarter-century ago.

Night Trap is notorious for a number of reasons. It featured live-action video with real actors that players could occasionally interact with. At the time, it was definitely positioned as a shocking diversion from the colorful mascot platformers like Mario and Sonic because it focused on “mature” themes. That mostly came across in the form of ladies in their underpants and murderous vampires. Dan Plato, the actor who played Kimberly on the early ’80s sitcom Diff’rent Strokes, was the game’s star.

But while the game is a prime example of the FMV boom that accompanied the introduction of CD-ROM technology in video games, it is more influential for leading to the creation of the ESRB rating system. In the 1990s, the U.S. Congress held hearings about violent video games like Mortal Kombat and Doom. Night Trap was one of the big go-to examples that justified that particular moral panic. The industry responded to Congress’s inquiries by agreeing to self-police itself with a rating system that would designate which games were suitable for children and which were not.

In 2017, however, hearing congresspeople like Sen. Joseph Lieberman (at the time, a Democrat from Connecticut) call Night Trap and similar games “shameful” and “disgusting” is a humorous example of how much fear older generations can have for a technology that they do not understand.