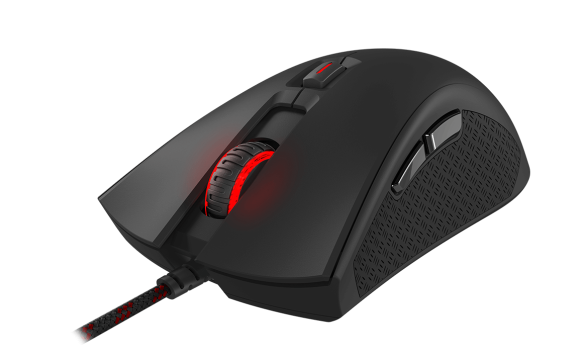 HyperX has already established itself as one of the best companies for gaming headsets, and it expanded into keyboards last year. Now, the Kingston brand wants to complete its takeover of your desk with the Pulsefire FPS gaming mouse and the Fury Pro mouse pad.

The Pulsefire is a new $50 mouse with an optical sensor, two thumb buttons, and a number of comfort features. It’s more expensive than some of the more generic options on the market, but it’s less expensive than the $70 competitors like the Razer DeathAdder or the Logitech G Pro. And despite a lack of customization options (or actually because of it), the Pulsefire is a viable option for any PC player looking to keep up with the competition in Overwatch, Counter-Strike: Global Offensive, or PlayerUnknown’s Battlegrounds.

It has a great design

I’m really happy with the ergonomics of the Pulsefire. It doesn’t feel molded to my hand like the DeathAdder, but it still fits right into my mitts in the way that I like. HyperX improves the comfort with smart button placement and really grippy texturized rubber along the side that ensures the device won’t slip out of place. All of this means that you don’t need to tense up your hand muscles to effectively aim with this mouse, and that ensures comfort over lengthy gaming sessions.

The Pulsefire’s huge sliding pads also contribute to a noticeable ease of use. These slippery surfaces create the right amount of friction to glide smoothly across HyperX’s Fury mouse pad while also providing enough tactile feedback so that you can stop in an instant. These giant skates also provide a consistent pressure that never becomes wobbly.

Another major factor when it comes to ease of use is the lack of software. The Pulsefire is completely plug-and-play, which means no installing third-party dashboards or syncing online. You just jack in the USB cable into any PC, and the Pulsefire will work exactly the same way every time.

To adjust the sensitivity then, the mouse includes a button behind the wheel that shifts between four DPI (dots per second — which controls how quickly your cursor moves across the screen) settings: 400, 800, 1,600, and 3,200. For me, 400 and 800 are among my most used DPIs, so I got right into the flow of using it.

While I applaud the lack of software, the absence of customization does hurt the Pulsefire a little bit. I’m never going to use a 3,200 DPI option on a mouse. Even when I’m working, I’m usually well below that. So I dislike that I have to scroll past 3,200 to get back to my comfort zone. And I also dislike the color-coded sensitivity indicator light. I can never remember which color means 400 DPI and which is 1,600. So I’m often left doing trial-and-error testing in crucial moments during a game. That’s a problem that more use would probably solve, but it’s still a problem for me after a couple dozen hours of use.

There is something “feng shui” about having a desk with matching components. I think Razer was one of the first companies that realized that building a PC was as much about fashion for some people as it was about power. And if you want to get the Pulsefire to go with your HyperX Cloud headset and Alloy FPS gaming keyboard, I think you’ll end up happy.

But even if you aren’t trying to complete the set, the Pulsefire is a mouse that will keep you competitive at a relatively low price, and it’s worth considering no matter what — especially if you want to avoid extra software.

HyperX provided GamesBeat a sample unit for the purposes of this review.