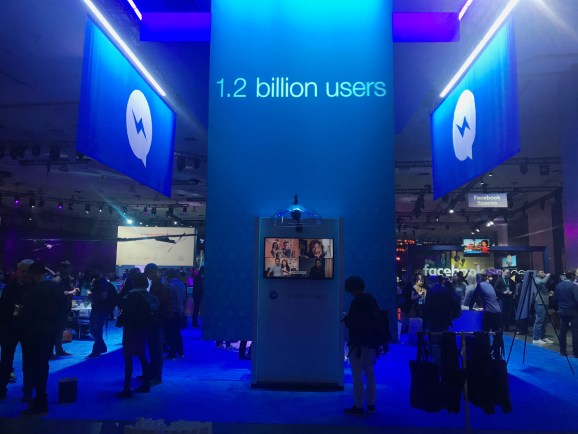 Last week, amid the launch of social VR platform Spaces and news that Facebook is working on tech to type with your brain and feel words, Messenger Platform 2.0 made its debut.

To address a lack of discovery — what developers told Facebook and VB was their biggest issue — Messenger Platform 2.0 brought with it a series of new features, including a dedicated Discover tab for featured or popular bots and businesses.

“We have a set of filters and rankings to make sure only the best bots will be shown there,” engineer Mikhail Larionov told more than 100 developers last week in an F8 session titled “How to Build a Great Bot.” “Why now? Over the first year, bot quality got much better so now we have more great bots available.”

To get Facebook to feature your bot in the Discover tab, fill out the Discover submission form located in Page settings on Facebook, Larionov told developers at F8 last week. The submission process for bots to be featured in the Discover tab was opened last Tuesday, shortly after the launch of Messenger Platform 2.0. Developers have one more week to apply before the service is promoted to the broader public.

“Our next step is the public rollout in the U.S. in May. After that we’ll continue with a global rollout,” he said.

The form will determine which categories your bot appears in within the Discover Tab, which languages it supports, and the description of the bot people read. For people making stealth or private bots, the form can also be used to tell Facebook you don’t want to be featured or discoverable.

For bots not associated with a Facebook page, Facebook will use existing categorization and page metadata to determine which category a bot will appear inside Messenger, according to the Discover Tab portion of the Messenger Platform website for developers.

Common characteristics of featured or popular bots are low block and report rates, the use of “Get Started” in bot menu and NLP options, and low reliance on humans. These elements can affect a bot’s ranking and whether it appears in the Discover tab, Larionov said.

Other features to improve discovery that arrived as part of Messenger Platform 2.0 include an experiment to include bots in smart replies from intelligent assistant M starting with Delivery.com and the ability for bots to speak in group chat threads (no NLP allowed in groups).

The bot discovery drawer that has been part of the discovery of top Messenger bots since last year also made its return with 2.0. Following a VB report in late March that bots placed in the area by algorithm or Messenger staff included clickbait and pornography, the number of featured bots displayed was reduced to one or two bots; however, it’s now back up to about 20 bots. Bots are chosen for this drawer in part based on engagement and retention rates, Facebook told VB last summer.