Uber has today released an app update to better understand the circumstances in which any UberPool ride is rated less than five stars. If you dole out a less than perfect rating, the app will now prompt you to provide additional details. Uber said this information will help it understand the context so drivers won’t be unnecessarily penalized in the event that the less than stellar experience was caused by a co-passenger or other factors outside the driver’s control. 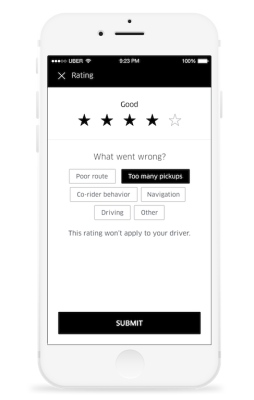 Above: Uber wants to know more about what went wrong with your Pool ride so it doesn’t unnecessarily penalize drivers.

Within UberPool rides, you can now specify what went wrong — everything from poor routing to navigation issues, too many pickups, issues with the co-passenger, unsafe driving, and others. So if the other rider is listening to music without headphones and you have a poor experience, you can let Uber know without the driver being impacted. Whether this will result in consequences for the other person remains to be seen.

Drivers complained to Uber that they were getting lower ratings when providing carpool service, according to the company. Based on its research and analysis, a spokesperson told VentureBeat that it discovered riders were “sometimes rating drivers for things beyond their control.”

Although this latest feedback option is available exclusively for UberPool rides at this time, the company is looking at possibly implementing it into other services in the future. Its release also comes more than five months after Uber launched Compliments, a feature that lets you thank drivers for an awesome ride. But while Compliments is seen by drivers, today’s update is for Uber’s eyes only.

But riders are not being left out of this update feature. Uber has made it easy for them to find out their ratings just by looking under their name in the app’s menu. “We hope this update will remind riders that mutual respect is an important part of our Community Guidelines,” wrote product managers Michael Truong and Ronak Trivedi in a blog post. This is a marked departure from before, when riders had to visit the help section, tap on account and payment options, modify their account settings, and choose “I’d like to know my rating.”

Making the service more equitable to drivers has been one of the company’s key areas of focus in light of recent incidents, including one in February, when Uber chief executive Travis Kalanick was caught on tape berating a driver. Rachel Holt, head of the company’s U.S. and Canada business has said that “we are now rexamining everything we do to rebuild our relationships with drivers.”

There’s no word on whether tipping will be introduced soon.