It isn’t easy re-creating the sounds of a distant war, but that’s what Sledgehammer Games had to do for Call of Duty: WWII, the new installment of the Call of Duty series that will debut this fall.

Sledgehammer has been working on the game for the past 2.5 years, and I saw a preview of it at Sledgehammer’s headquarters in Foster City, Calif. After I saw a trailer and a level of the new game, I sat down with was David Swenson, audio director for Sledgehammer. Swenson had access to a lot of World War II era guns and even some working World War II vehicles.

But he also had to go into a forest and hit broken tree branches and trunks with a sledgehammer to make the sound of trees being split by artillery shells. He used a big pot in an aging gun emplacement in the Bay Area to simulate the sound of a helmet bouncing around a German concrete bunker on the coast of Normandy. And he had to catch the sound of a squadron of World War II-era bombers flying overhead during an air show. We talked with Swenson about his team’s resourcefulness in making the sounds of Call of Duty: WWII more authentic.

Here’s an edited transcript of our interview. Check out the actual audio interview below as well. 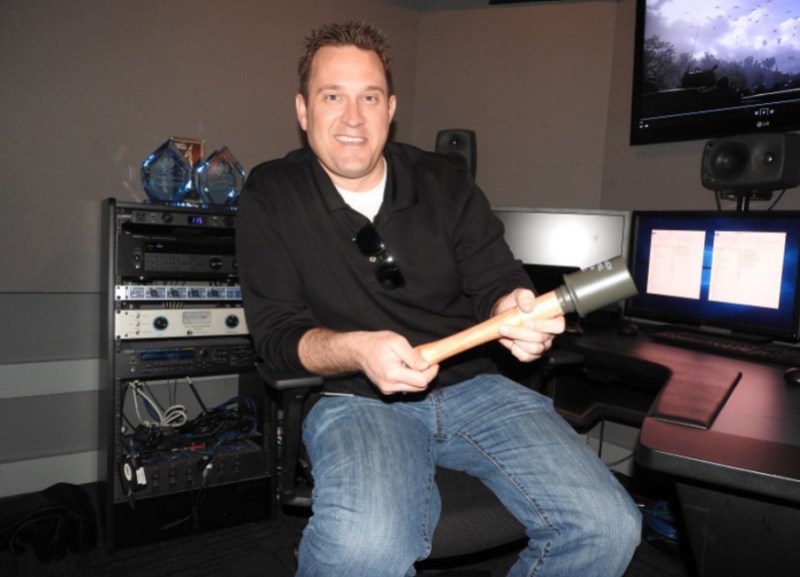 David Swenson: Just to walk you through a bit of our process, it’s been interesting working on a WWII game. This is a bit of a shift for the team after working on Advanced Warfare. For those games, as a sound designer, it’s an interesting challenge, because you’re making sounds for things that don’t exist. You’re inventing and being creative. This game presented a totally new challenge, because these are things that exist – real tanks, real planes, real weapons. The challenge for us was to capture those an authentically reproduce them for the audience.

That becomes tricky sometimes, because some of those vehicles – planes, tanks – they exist, but not all of them run anymore. Or they’re difficult to get our hands on and record. That’s been a lot of fun for us. We’ve spent a lot of time—a huge part of our process is going out and recording real sounds. The audio team has a great opportunity, because everything for us is real. We don’t make a computer-generated version of something, like the graphics. We actually went and recorded real things. It allows the end user to have this great, immersive experience. While they see these beautifully rendered computer graphics, they’re hearing real recordings.

You mentioned being down in the bunker. What is it about that bunker that makes it feel like a real place? We have to go into every detail of that experience – getting recordings down in that place. What does it sound like when artillery is exploding outside? What are the sounds inside the space?

There’s the fight down in there where they’re throwing each other around, and finally the American grabs the helmet and smacks him over the head. He drops the helmet on the ground. You hear all those sounds. We want that experience to be immersive, to make it feel like you’re down in that space. We actually went in a space like that and recorded those scenes in there. When we have a sequence like that, we’ll go and find a bunker and take a helmet, take a bunch of vintage gear, and we’ll throw it around and record it in the space to get the reverberations and environment sounds.

GamesBeat: That was one things I was wondering. How much real-world travel did you do?

Swenson: A lot. We traveled all over the place to get some of these different environments. That bunker fight, for example, you can see us recording in this video here. We went to a military facility with all these concrete walls. It’s just north of San Francisco. We’re able to get these great sounds. You hear the reverberation, the helmet rolling around on the ground, the grittiness of the scratching against the ground, the sound of the backpack slamming on the ground. You can hear all those bits in this great reverberating environment. When you hear that experience in the game—you can listen for the sound of the backpack hitting the ground. You hear the helmet drop. It’s all from that location. We’re getting the real environments.

We do that with every major sequence in the game. Whether it’s tanks driving in the forest, when the trees are bursting and the forest is exploding around you—we spend time going out and recording all those elements in those environments.

GamesBeat: You blew up a forest?

Swenson: Kind of? I can tell you how we did that. It’s a complicated sequence, but it’s a lot of fun to take a sequence like that and break it down. We can’t blow up a whole forest, obviously. So we start with explosions as the obvious thing. We record those. Then we look at the rest of the sequence and think, what are the details of this? What are the elements that we want to stand out to the player and make them feel like they’re there? You have branches breaking and exploding, debris flying through the air and falling down around the player. All that wood debris is really dangerous. Visually it’s a big part of the sequence, so we want to make sure it’s part of the audio too.

We went out to a forest and took a sledgehammer with us. [laughs] We found a stump and a whole bunch of branches and stuff to pile on top of it, and we bashed it with this hammer a hundred times. We got these great breaking and cracking sounds, branches flying all over the place. I have a video of that too. We’re out there with the mikes really close on it, just doing that over and over. You can see the pieces flying. I even threw some at our lead sound designer there with the mike, to get the sound of debris raining down around you. We found this great log here, to get those weighty and heavy sounds. In the environment you hear the echoes in the forest, reverberating off the trees.

Now, when you see that sequence in the game—I can play it for you. As you listen, in addition to the explosions, you hear all the branches breaking, those big cracks, the debris falling on the ground, it all stands out. It makes the environment feel organic and dangerous. It’s pretty cool.