If you drive north away from the hustle and bustle of tech-hub San Francisco, cross the Golden Gate Bridge, and continue on Highway 101 for about half an hour, you’ll arrive in a place that feels very different from where you started: San Rafael. Life here seems to move at a more leisurely pace, a sense enhanced by the gorgeous scenery and lush natural resources all around — you have the northern part of the San Francisco Bay to the east; the occasionally snow-topped, or fog-shrouded, Mount Tamalpais rising up to the west; and, just south of that, the coastal redwoods of Muir Woods National Monument. But you haven’t left the tech completely behind.

San Rafael is home to one of game development’s rising stars: Telltale Games. Started in 2004 by a trio of former LucasArts game-makers, Telltale was founded on a slightly different product-release model. Instead of working on constructing a single game across the span of a couple of years, the company leaders decided they wanted to make mostly smaller, episodic games that could be turned out quicker, yet still capture — and hold — the attention of gamers.

“[Telltale’s founders started the company to] pioneer episodic gaming based on narrative and stories — kind of an evolution of adventure-game mechanics from our experience at LucasArts,” says Steve Allison, Telltale’s senior vice president of publishing. “Also, they were focused on the ideas that licensed games were underserved [and] underappreciated… and stories were really the way to honor the [intellectual properties] that people loved.”

From the first episode

In its early years of operation, Telltale released a variety of single-episode games (a Texas Hold’em poker title, and a couple of games based on the Bone graphic novels) and some multi-episode titles (four based on the CSI TV franchise, and three based on the Sam & Max comic series). Gradually, the company honed its development craft, also building up its exposure and increasing its audience by adding bigger licenses to its catalog — including Wallace & Gromit (2009), Back to the Future (2010–2011), Jurassic Park (2011), and NBC’s Law & Order (2011–2012). 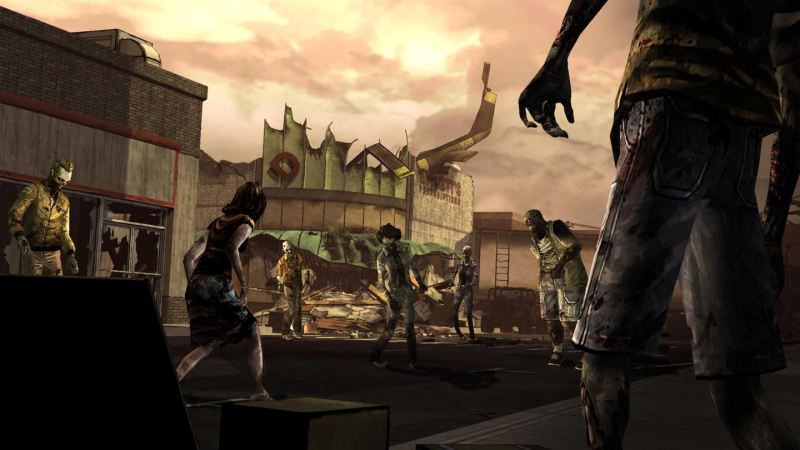 Above: The Walking Dead series

That ramping up with prominent licenses continued with even higher-profile and durable licenses over the last five years. In 2012, Telltale released their award-winning, five-episode first season of The Walking Dead. The five-episode series The Wolf Among Us, derived from the Fables comic books, debuted in late 2013. HBO’s Game of Thrones TV adaptation got the Telltale treatment, beginning in 2014 with a six-episode series (and a second season of the game is in the works as of the date of this post). This trio of licenses helped launch Telltale’s success by exposing and captivating many new players.

“We really leaned into different demographics with The Walking Dead and A Wolf Among Us, and all of the things we’ve been doing over the last few years,” Allison says. “We evolved our product from where it was in the early part of the company’s history to where it is today.” 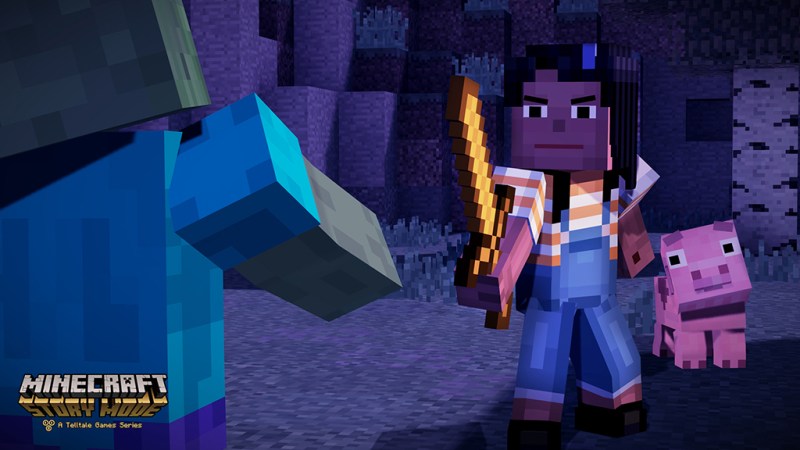 Telltale has also done some unique crossovers, such as partnering with Gearbox Software for an episodic treatment of the Borderlands franchise called Tales from the Borderlands (2014–2015). They also produced eight episodes of Minecraft: Story Mode (five monthly episodes from October 2015, then three downloadable ones later in 2016), with the blessing of Minecraft creator Mojang.

In addition to the success of its episodic model, Telltale has also benefited from its cross-platform strategy. Most of its games appear on platforms ranging from mobile to consoles to computers, so Telltale’s games can be played wherever people want to play them.

“For us, the same game on every platform is the Telltale secret sauce. We’re on [Amazon] Fire TV and PlayStation 4, and PC and Android, and iOS, and new, emerging platforms,” Allison says. “One of the things that helps keep our business healthy and strong, in a way that may be more challenging for other studios and other publishers, is that we’re constantly bringing on new platforms, be it Nintendo Switch or smart TV — or platforms that we are working on that we have yet to announce. We keep moving as the platforms shift, and our content is portable generally to every device that exists (within a reasonable spec).” 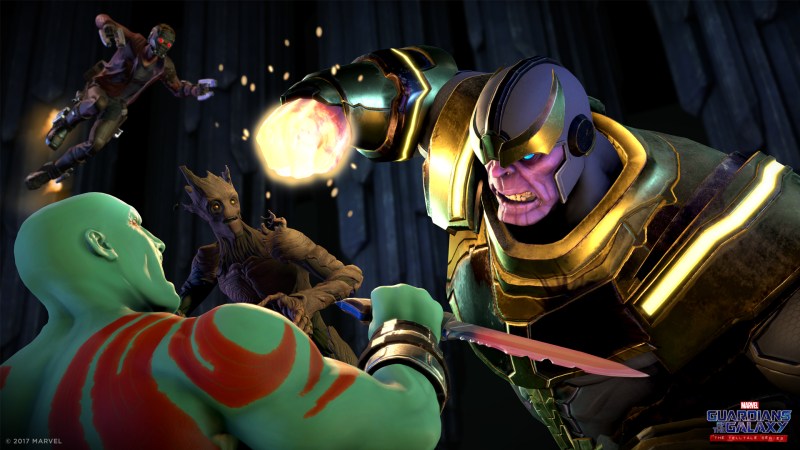 Above: Guardians of the Galaxy: The Telltale Series

“We have a lot of fans of the [Guardians] franchise in the building who were fans before the movies made it a lot bigger,” Allison says. “For us, it’s an opportunity to tackle these characters, and put our own spin on them. It’s something that the men and women in the studio are pumped about.”

Guardians is a property that offers unique presentation challenges, in that differences exist between the comics and movies from the standpoint of the story and mood. Telltale’s solution is to craft fresh stories in the familiar universe instead of doing derivations, minimizing the tendency to compare stories on each media as representing the same experience for the audiences.

“The challenge is making sure that we honor the spirit of the movie, but also honor the spirit of the comic at the same time,” Allison says. “Sometimes a lot of friction can occur between those things — the comic can be a lot more serious than the movies are portrayed to be. But I think we’ve struck a good balance of creating an original story that anyone who loves the movie is going to be into completely. And anyone who’s had exposure to the comic franchise before will find familiar things that pay homage to the extra knowledge they might have [from the comics].” 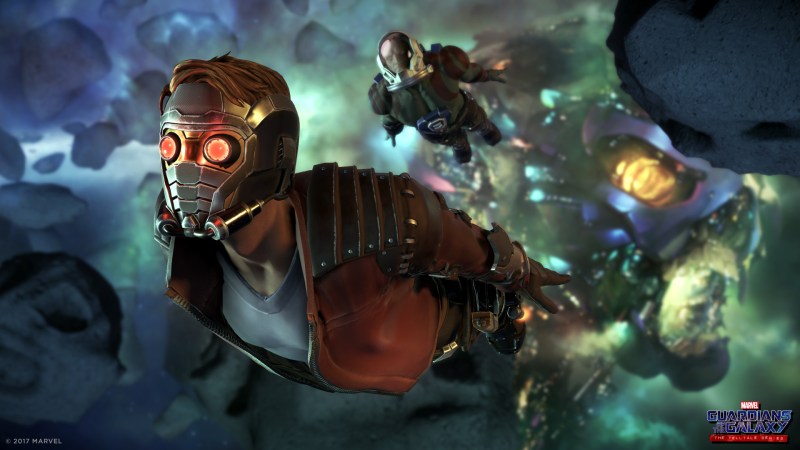 Above: Guardians of the Galaxy: The Telltale Series

As any company moves forward, there are always development challenges to face — usually revolving around changes in platforms, and in the tools needed to make games. Telltale is no different, though there are also specific challenges that come with being an episodic software company.

“Hitting the quality bar that we expect of ourselves from the perspective of what we do, and still getting people content on time, continues to be the push-and-pull here. We’ve gotten much better at it,” Allison says. “but we expect to always have tradeoffs — making the best episode possible, but getting it to people typically in four-to-six weeks is what we shoot for…though sometimes we have to go a little longer.”

Telltale expects to announce another couple of games this summer, potentially revealing one at the E3 trade show in Los Angeles in June, and the other at Comic-Con in San Diego in July. Allison also indicated that the studio is working on other games that’ll be announced in 2018. Life in San Rafael may move at a leisurely pace, but there’s no opportunity for Telltale to sit back and chill if it wants to keep its business growing and thriving.