Some people say Anita Sarkeesian threw a bunch of rocks at the game industry. But I know that she did more than hurl stones — she also changed it for the better.

The head of the Feminist Frequency said yesterday she had decided to stop producing the firebrand videos dubbed Tropes vs Women in Video Games, which criticized sexism in the game industry.

“This is one of the most emotionally complicated projects I’ve ever created,” Sarkeesian wrote. “It has been simultaneously awful and wonderful, and the journey is one which I will most certainly never forget.”

Sarkeesian shined a light on the darkness of sexism in games, and in return she received threats from hordes of threatened males who preferred the darkness. She suffered for being one of those brave enough to call out what seemed so obvious.

In spite of the threats, Sarkeesian carried on for more than five years. Now, she says she will move on to other projects that will support women and other causes related to media, but she didn’t say if she would continue to focus on games.

Sarkeesian was important because she forced us to take a look at battles that we thought had already been won. And she did it during Gamergate, one of the most vitriolic periods in game industry history as the power the Internet and hatred came together to silence critics.

One of the more interesting Feminist Frequency videos for me was about how men can end sexism. It listed five things men can do to help. First, it says listen to women. Educate yourself. Challenge other men. Don’t get defensive. And learn from mistakes. Those are simple suggestions for changing any behavior, but it took Sarkeesian to make us look harder at sexist behavior and think about it more.

I’m the father of three daughters. I’m not sure where they will wind up working. I hope they will choose whatever makes them happy, but I hope nobody else — or the greater forces of society — nudges them into traditional choices or actively pushes them away from roles in technology or games.

To do my part, I draw attention to the issue of sexism within games. I actively seek out women to write about, and I also seek out women to speak at our conferences. Some criticize me because we don’t have enough, and I agree with them. But awareness of the importance of finding more diverse people to speak is always on my mind.

Next week, our GamesBeat Summit 2017 conference will include a panel on “Bucking the Status Quo, which Megan Gaiser (a pioneer of games for girls such as the Nancy Drew series) of Contagious Creativity and Guy Bendov (a pioneer in experimental games such as virtual reality) of Side-Kick Games created. It will focus on “Redesigning leadership for diverse talent, perspectives, and products.”

It panel will bring up progress on diversity issues, equality in the workplace, and true international collaboration and how these things are challenged on a daily basis. It will probe into how we need to invest in a leadership transformation to proactively find creative solutions. How do we advance the gaming and tech industries in the right direction and welcome diverse people, perspectives, and products without leaving anyone behind? 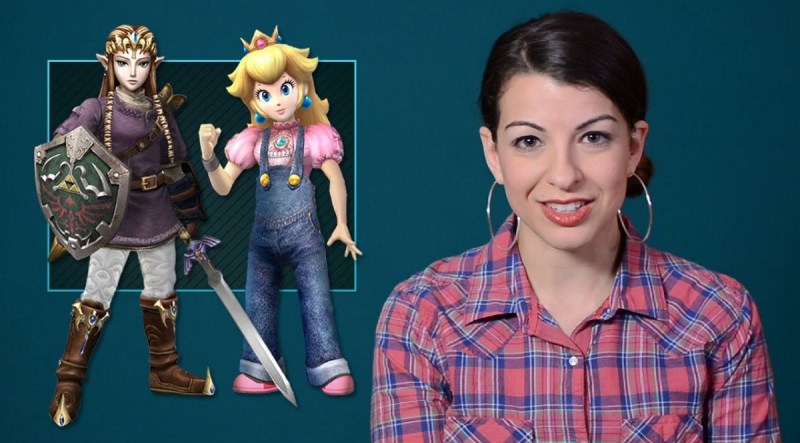 Above: Anita Sarkeesian is moving beyond the Tropes vs Women in video games series.

We would not have that panel if it were not for Gaiser, who is one of our advisers. I think it’s an example of what individuals can do to move the cause forward.

I also know that Sarkeesian had an impact. She caught the attention of Michael Condrey, cofounder of Sledgehammer Games, maker of the upcoming Call of Duty: WWII. Condrey examined his own games and his own hiring of people, and he made some changes. It is perhaps no coincidence that this year’s Call of Duty has a more diverse cast of characters than you might expect for a World War II game, and it also has female soldiers in it who are historically accurate. (Condrey is also speaking at our GamesBeat Summit).

Sarkeesian’s approach was to point out all of the problems with the game industry and to force us all to decide whether the situation in games for women was unacceptable. It had that effect of making girls and women wonder whether they belonged in games. You could argue this actually hurt the cause of women in games by discouraging other women from going into the business.

Others have taken a different approach. Amy Hennig, the co-creator of the Uncharted series at Naughty Dog and now one of the developers of EA’s Star Wars games, said at one of the Game Developers Conference events that she had never had been threatened in the same way. She wanted more women in the game industry, and her approach was to say, “Come on in. The water is fine.”

A lot of people might think that women, who are about 20 percent of game developers yet are half the population, are actively choosing not to focus on games. But it’s probably not as simple as that.

Consider this week. Game industry vetrean Kathy Astromoff, wrote on Facebook, “I was nauseated to hear a talented engineer tell the group not to work at game companies because they’re not welcoming to women. ‘My friends who have worked on game teams told me to stay away,’ she said. ‘We look out for each other like that,’ she said. The crestfallen look on the girls’ faces broke my heart. I jumped in with ‘not all game developers,’ but it sounded like the excuse it is. The word is out, and we’re losing. I am so sad for this industry I love.”

Sarkeesian carried the burden of being a leader on sexism in games for a while. Now maybe it’s time for everybody else to step up to replace her. Because that’s how you change the world.

“It’s a bittersweet moment, bidding farewell to this series. It’s definitely time for it to be over, time for Feminist Frequency as an organization and for me personally to move on,” Sarkeesian wrote yesterday. “But I keep thinking about all the ways that the world of video games has changed since that day, almost five years ago, when I first took my modest little Kickstarter live. It hasn’t all been for the better, but some of it definitely has. There are conversations happening now, among players and among creators, that weren’t happening before, about who games are for (everyone!), about what impact they can have, what they can tell us about humanity, empathy, race, gender, sexuality, the world we live in, and the world we want to create for ourselves.”

Hat’s off to Anita. I look forward to what she will do next. Here’s her final episode.