You know the PC gaming-peripheral market is booming when everyone is making a mechanical keyboard and a mouse with a bunch of extra features.

Like Razer, Kingston, and others, Creative Labs wants to capture the attention (and the cash) of people who play a lot of games on PC. To do that, the company already has a handful of excellent speaker systems and external USB sound cards, but now it also has a keyboard-and-mouse set to go along with its other products. The Vanguard K08 keyboard ($140) and Siege M04 mouse ($70) are available now, and they provide a satisfying, reliable experience that looks especially pretty when you pair them with Sound BlasterX audio equipment running the company’s RGB LED lighting system. 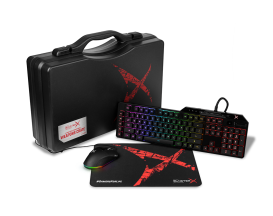 The Vanguard and Siege have a striking appearance. I think Sound BlasterX’s lighting is starting to win me over compared to the other LED RGB options on the market, and a big part of that is the consistency between the products. Setting up the lighting to work in unison between the keyboard, mouse, and speakers (like the 2.1 Kratos system) creates a cohesive visual package that I find highly appealing.

But it’s not just the lighting that makes this set so attractive. The Vanguard keyboard has a nice matte-black finish on a solid piece of rubbery plastic for the plate beneath the keys. The keycaps themselves use a shinier material that more closely matches the Siege mouse’s arching palm rest. On the edges of that device, you’ll again find a matte material — only this time it’s a fully rubber material that leads me into the ease of use.

The textured grips surprised me, as they’re quite useful. The Siege has a more traditional mouse design than some of the more ergonomic models on the market, but I always had a confident grip on it because the inside edge of my thumb, and the tip of my pinkies always dug pleasantly into the rubber.

As for the keyboard, the Omron switches aren’t my favorite. Pressing them down is too mushy for me, but that never hurt the Vanguard’s performance. I do love the way the Omrons seem to explode back into their default position after actuation.

During gaming, the Siege and Vanguard do the most important thing I want from a gaming keyboard-and-mouse: they melt into my hands and into the desk. I forget about them and am able to focus entirely on the game instead.

The Vanguard has everything that I want from a gaming keyboard. On the left side, it has the Macro keys that I can set to whatever task I want using the Sound Blaster Connect software. On the top it has media keys and a rolling volume bar that is excellent to fiddle with. And along the top edge, it has a passthrough USB port for power and data.

The Siege is also packed with features. You can manually set different DPI levels how you want, but it also has a dedicated “sniper” button that will drop the DPI down even further when you’re in particular circumstances. This is so useful for shooters, and I’m going to want it on all of my mice going forward.

While Creative Labs did a fine job producing a high-quality product, I hate the Vanguard’s wristrest. It detaches from the keyboard too easily, and I don’t like the way it feels even when it is attached. It looks nice, but I much prefer the faux-leather rests Razer has started including with its products.

The Siege isn’t without flaws. The feet on the bottom that enable it to slide smoothly across most surfaces have a harsh ridge that gets caught too easily. If you move the mouse over the edge of its pad, you’ll probably get hung up trying to bring it back onto the play surface. Obviously, the answer to this is to get a bigger pad, but it’s still a design flaw that others have fixed by adding a roundness to those skates.

The Sound BlasterX Vanguard and Siege are more than serviceable. They are genuinely easy to use and enjoy, and I recommend them — especially for anyone with Sound BlasterX audio equipment. Matching all of your components like that is part of the fun of customizing your rig, and Sound BlasterX did a great job of ensuring that visual cohesion works and is pleasing.

Creative Labs provided GamesBeat with a sample unit for the purposes of this review.