Baahubali 2: The Conclusion, a major film from Indian director S.S. Rajamouli, debuted this week. And it is accompanied by a new mobile game from Moonfrog Labs, dubbed S.S. Rajamouli’s Baahubali: The Game.

The mobile game is a major release on Google Play and the Apple App Store. To create it, the Bangalore, India-based mobile game publisher Moonfrog Labs turned to Mark Skaggs, co-creator of FarmVille, who moved to India in 2016 to work on games for the Indian market at Moonfrog Labs. Skaggs is betting that India’s game market will be the next China, which is now the world’s largest game market.

Moonfrog created the real-time strategy game in partnership with filmmakers Arka Mediaworks and Rajamouli’s Baahubali, with support from Graphic India. You could call it a major transmedia creation, Indian style.

This game is based on Rajamouli’s two-part Indian epic film, Baahubali, with an all-star Indian cast. The game is not a recreation of the film. Baahubali: The Game takes place in the Baahubali extended universe, where the player gets to be a part of the epic. The game was released this week in four languages: Hindi, English, Tamil, and Telugu. 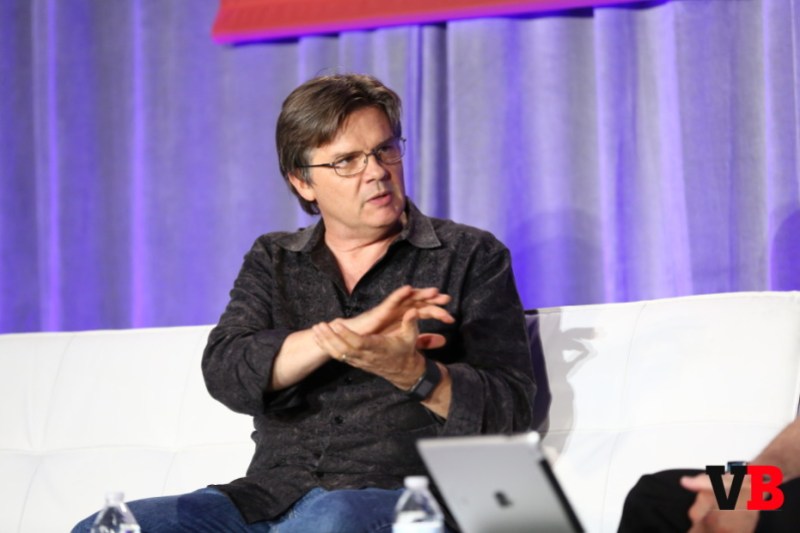 Above: Mark Skaggs, speaking at GamesBeat 2015.

With Baahubali: The Game, the players act as Senapatis (generals or commanders) who serve the kingdom of Mahishmati. They train an army, build defenses and join forces with Baahubali, Kattappa, and the other heroes of Mahishmati to push back the ruthless Kalakeya. The game gives the Baahubali fan a new entry point into the film’s universe as a player, where the fan can experience the challenge of being a general with the command of an army.

The end goal is for the player to prove their skills by building the strongest army, the best defended Rajya (outpost), and a working economy with food and gold to protect the kingdom of Mahishmati from the Kalakeya. 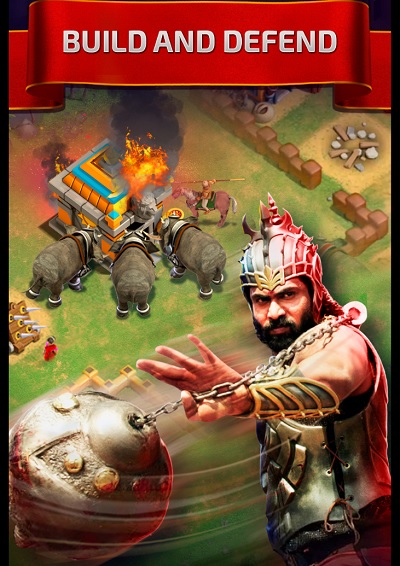 Above: Moonfrog’s Baahubali: The Game is a mobile strategy game.

Skaggs led the design at Moonfrog Labs, where he is a director and board member. He previously led teams that created some of the world’s most popular social games such as FarmVille, Empire & Allies, CityVille, Treasure Isle, Lord of the Rings: Battle for Middle-earth, and Command & Conquer Generals. His games have reached 365 million people.

“We’re using our expertise as game makers to give Indian players the opportunity to experience the characters, environments, and battles in the Baahubali universe up close and personal,” said Skaggs, in a statement. “Great film franchises like Star Wars live on in the minds of players even after the film ends on the big screen. This game will let people live, play and experience the universe of Baahubali in new ways.”

He added, “God is in the details. And as you upgrade the game to various levels, you see the details on your own Rajya in the Baahubali universe. The challenge of bringing the epic world of Baahubali into a small screen was met by the art team watching the film over 100 times to recreate the extended universe with nuances such as iconography, colours, architectural styles, weaponry and clothing styles into one game board. From concept sketches to 3D models and paint overs, every detail of the game went through a labored process of creation, development, and building.” 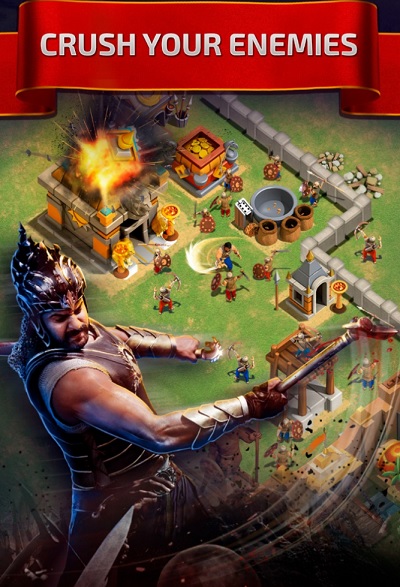 Above: Moonfrog’s Baahubali: The Game runs on 3G smartphones.

The title is similar to Skaggs’ previous title, Empires & Allies, which he directed while at Zynga. But in this game, the film’s heroes play major roles.

The film director, S.S. Rajamouli, said, “I like to think of Baahubali: The Game as an extended Mahishmati universe. The Game is another step for us in creating a cross-media fictional World Of Baahubali. To make this happen, we worked with Mark Skaggs and Moonfrog Labs to bring the World Of Baahubali to your phone.”

The game is about the player’s skills as a general with the strategy and the smarts needed to become the most powerful Rajya in Mahishmati. It can be played in two modes – Solo Player (Campaign) and Player versus Player (PvP). In Campaign mode, the player is a part of the Baahubali universe, where she or he constructs and defends a Rajya. The player can build farms to maximize food production, erect barracks to build troops and drill gold mines to upgrade infrastructure and build more buildings. This gives players the resources to wage war and fight the Kalakeya in campaign mode. Attacking various Rajyas of the Kalakeyans such as the Watchtower, the Fort, Thieves’ Den and the Forbidden Village, brings more resources into the player’s Rajya.

In the player-versus-player mode, players get to fight against other players, and here’s where one can form alliances with family and friends who are also playing the game. The player can enlist Mahishmati “heroes” including Baahubali, Kattappa, and Bhallala Deva, in her/his army. The heroes come with their special powers which the players can deploy to help them protect your base or attack with you.

Tanay Tayal, cofounder of Moonfrog Labs, said in a statement, “Baahubali: The Game is an important milestone for us because it shows the quality of games that we can make and build in India. We’re excited to partner with Arka Mediaworks and SS Rajamouli. As a team, we love the film and want to do justice to all the work that SS Rajamouli and the Arka team have put into building it by making a great game that people can play and enjoy even many months after the films have come out in the theaters.” 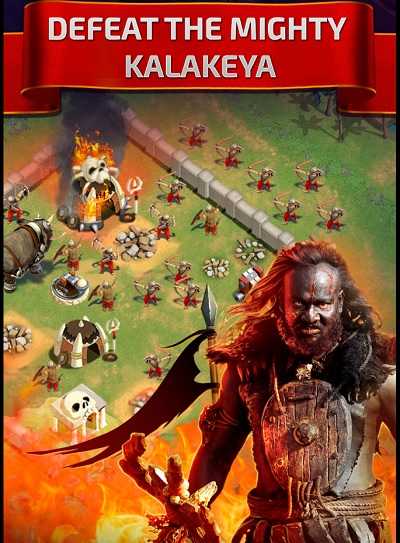 Above: The enemies in Baahubali: The Game.

Moonfrog Labs has raised $16 million to date from investors including Sequoia Capital and Tiger Global. It was founded in 2013, and its other hits include Teen Patti Gold, Bingo Club, and Smash Cricket. Teen Patti Gold has been downloaded more than 20 million times.

Arka Mediaworks, a production house based out of Hyderabad, was founded in 2001. It has also created a virtual reality experience based on the Baahubali 2 film. The first film, Baahubali – The Beginning, is the highest grossing film in India and the third-highest grossing Indian film globally.

Advanced Micro Devices also saw a big opportunity with Baahubali, and it worked on a virtual reality experience related to the film.

In an email, Skaggs said of the team, “It’s been a joy because the team is hungry to do their best work. They want to learn, work hard and come up with good ideas. There is great talent here at Moonfrog and I love working with great talent. The founding team has created a gem of an environment with high trust levels, support and a clear mandate to create a great games in smart ways.”

He added, “There have been a number of very interesting and fun challenges to working the Baahubali game. The first of course is the timeline of building an engine, tech, tools, art and game design in just over a year. We kept the team tight and small and then worked really hard to get it all built. The next is raising the bar of expectations on the level of quality of games that can be created in India for India. Finally, of course, is doing justice to the great film series.”

“Now is this the time where Indian talent is getting a chance to create new games here in India for the Indian market. I think the audience here has been waiting for this and it’s fun to surprise players by telling them this fun game they are playing was made right here in Bangalore,” Skaggs said. “My answer wouldn’t be complete if I didn’t take a moment to call out the fun team here at Moonfrog. They are very talented on both the tech side and the creative side. There’s also pride in creating great work to show friends and family while always learning, growing and working very hard to live up to the opportunity we all have here at the very early start to the game industry here in India. It’s a true treasure to come to work each day with the Baahubali game team, the other product teams as well as the founders and directors here at Moonfrog.”