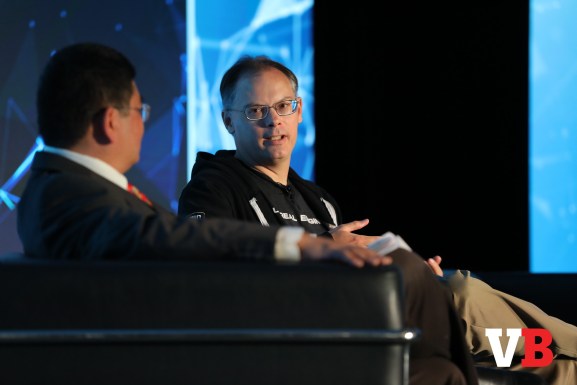 We’ve overcome some of the early roadblocks that are preventing us from living every moment in virtual reality, and Epic Games founder thinks we’ll figure out the rest of the issues within the next few years.

During a presentation at the GamesBeat Summit today in Berkeley (watch it here), Epic chief executive Tim Sweeney explained that the “metaverse” — the concept of an equivalent digital reality that people exist in simultaneously with the real world — is nearly viable. He says that making people feel like they’re really immersed completely in a VR space will require “deep inputs” that go beyond the motion tracking that the Rift and Vive systems are currently capable of. Specifically, he notes that consumers will need an array of cameras that monitor their skin and facial expressions, and then developer need to combine that data with deep learning algorithms that can create artificial characters that are capable of believable, human-like interactions.

“What we need are inward and outward facing cameras that scan your body. That’s what’s missing,” said Sweeney. “That technology has already been proven to work at a high-end commercial level costing tens of thousands of dollars. It’s probably as little as three years away.”

Today, Vive and Oculus can track the position of your hands and head in a 3D space, and then you have several buttons you can press as well — but that’s it. That’s a more complex input system than traditional games, but Sweeney notes that developers are going to need a lot more passive information about their VR players to more accurately mimic reality. If a computer knows that you’re smiling or drunk or frustrated, a game designer can use that information to build characters that will react to that information.

“That’s going to open entirely new kinds of game scenarios,” said Sweeney. “Today’s best role-playing games aren’t at all convincing. They aren’t even trying to approach reality. But once we have deep learning and input, we’ll be able to do much more advanced interactions beyond just killing monsters.”

Of course, Sweeney admits this technology is potentially dangerously powerful. Imagine, for example, that someone is able to use social-media data to accurately resurrect one of your deceased loved ones. But the Epic founder seemed accustomed to that kind of moral quandary.