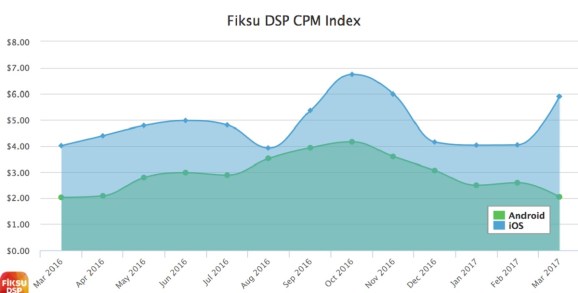 Mobile user acquisition costs on iOS rose 46 percent in March from the previous month, according to mobile marketing firm Fiksu DSP. But those same costs on the Android platform fell 21 percent.

The cost of user acquisition has been very different on iOS and Android in recent months, but trends in March were the most divergent of all.

Fiksu’s March indexes show that marketers are driving user purchases at the lowest cost observed in 2017, with cost-per-purchaser (CPP) dropping 20 percent on iOS and 25 percent on Android since March.

At the same time, the cost to buy media (CPM) rose 46 percent on iOS since last month, while those media costs on Android fell 21 percent. CPM is at a high for 2017 on iOS, at $5.90, while CPM for Android is heading in the opposite direction and is now at its lowest point for the year at $2.04.

“Many mobile game developers weigh growth on Android and iOS equally when it comes to their performance marketing priorities,” said Tom Cummings, vice president of new market development at Fiksu DSP, in a statement. “We expect that more and more brands will be mimicking this approach as they become more sophisticated in their programmatic techniques.”

CPM is cost per mille (mille being one thousand in Latin), and it is the price for every 1,000 times an ad is displayed. CPP is cost per purchaser, which refers to the incremental cost of each user that makes a purchase (or another high-value action).

“As more companies embrace the value of programmatic marketing for branding campaigns, the competition continues to drive up media costs on iOS,” said Cummings. “Brands continue to prioritize iOS users, which is similar to the pattern we have always seen with performance app install campaigns. While this may be a logical starting place — for one, the iOS ecosystem is less fragmented from a device perspective — we always advise continued investment into growing Android audiences, especially targeted toward new higher end devices.”

On a year-over-year basis, CPM rose considerably on iOS and was about flat on Android.

“The decline in CPP costs [in March] tells us that marketers are improving their targeting techniques and getting better at finding valuable users on mobile,” said Matt McGinty, chief revenue officer at Fiksu, in a statement. “Marketers using the Android platform seem to be mastering audience targeting, as indicated by relatively flat media costs year-over-year but a drastic decrease in CPP since 2016.”