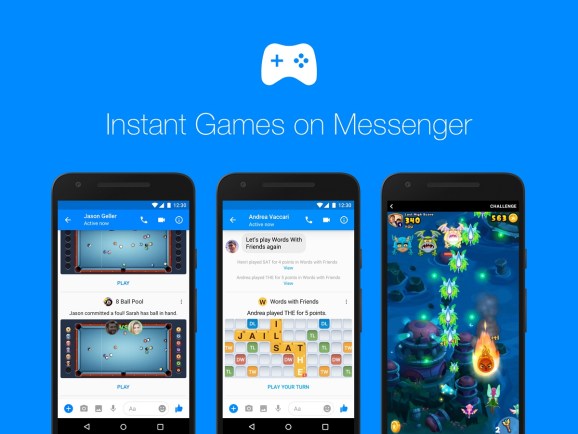 Facebook is announcing today that it is rolling out Instant Games on Messenger more broadly to the 1.2 billion people who use the messaging system every month.

In addition, it’s also launching the new features that the company previewed to developers at its annual F8 conference.

These include rich gameplay features, which enable developers to create unique and sophisticated experiences that include turn-based games, leaderboards, tournaments, and more visually engaging and customizable messages during play. Game bots help re-engage players by calling out new game options and encouraging competition with updates on the leaderboards.

When developers start to take advantage of these new capabilities, the games will become more dynamic and engaging, said Andrea Vaccari, the product manager for Messenger at Facebook.

People will see changes as game developers start to incorporate the new capabilities. One of Instant Games on Messenger’s biggest hits, Blackstorm’s EverWing, is among the first to use game bots.

Depending on what device you use and where you are located, there are now up to 50 games titles available on Messenger, with more being introduced almost every week. The No. 1 Pool game — Miniclip’s 8 Ball Pool — will debut on Instant Games very soon.

The new Instant Games on Messenger will roll out over the next few weeks worldwide for both iOS and Android, starting today.

The creators of Instant Games hope that it will bring virality back to the social-mobile games business and offer a chance for breakout hits on messenger platforms. Those hits can spread on social, bypassing the app stores.

Bypassing apps can be disruptive because they come with a lot of friction. Apps have to be advertised heavily because it’s hard to find them amid millions of other apps in the stores. Then they have to be downloaded and installed. Then the user has to open the app and play. Each one of those points is a source of friction where some of the potential users will drop off.

HTML5 games had problems for a long time, with the first games based on the HTML5 standard launching way back in 2008. Initial games were slow and didn’t perform well. But as smartphone hardware improved over time, the performance problems went away.