One of Valve‘s most visible public faces has moved on from the company. 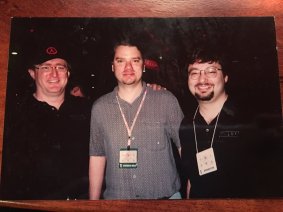 Chet Faliszek, writer on games like the Half-Life episodes and Portal, left Valve more than a month ago. For over a decade, Faliszek worked at Valve as one of its primary storytellers. Most recently, however, he has worked as Valve’s virtual reality ambassador. Faliszek would travel to events like the Game Developers Conference, Slush Play, and more to talk with developers about creating VR games and experiences on top of Valve’s open SteamVR tech. While the company has experimented on VR for years internally, it was Faliszek who turned the company into one of the best communicators on how people could best approach the technology as creators.

“I was with Valve for 12-plus years,” Faliszek said in a social media post. “But [I was] a fan for even longer. Can’t wait to play what is coming next.”

Faliszek did not say that Half-Life 3 is what is coming next. He also did not mention what he is doing next. On Twitter, he noted that he has spent the last month hanging out with his cats and not traveling.

@willsmith Yep, I have actually been gone for almost a month – hence all the cat pictures and no travels. #priorities…

Faliszek’s exit from Valve comes after some other notable Valve writers have left the company. Portal co-writer Erik Wolpaw left in February, and Half-Life co-writer Marc Laidlaw departed in early 2016. Faliszek is also leaving more than six years since the release of Portal 2, which is Valve’s last game that focused heavily on narrative and characters. The company now puts much more of its effort into running its live online games like Counter-Strike: Global Offensive and Dota 2 as well as its Steam store for PC games.