A diverse workforce is meaningless if you don’t use their perspectives to shape and enhance your games.

This is one of the biggest takeaways from a presentation about diversity and leadership at the GamesBeat Summit in Berkeley, California (watch it here). Moderator Guy Bendov, the chief executive of Side-Kick Games, said the panel was partly a reaction to world events, especially in the aftermath of a fraught U.S. presidential election and the controversial travel ban proposals from the Trump administration.

At one point, Bendov asked the panelists what they learned from moments of failure. Rami Ismail, the cofounder of the two-person independent studio Vlambeer and frequent speaker at game conferences around the world, had a cautionary tale. In 2011, he traveled to South Africa to speak at a local game development school for kids.

“At the end there was a Q&A for the students. One of the students, being somewhat cheeky, asked me whether they should drop out of school, which is a question I get a lot,” said Ismail. “I’ve learned to answer that question in a very safe way: ‘That’s a personal decision. You’re the only one who knows the circumstances of your life. But if you have to ask me, I’d generally recommend not to do it. This has to be your own choice. Some people learn better outside of school.’

“I told the kid that and the teacher … afterward grabbed me and said, ‘If you ever do that again, you’re never coming back to the school.’ And I was shocked because I’ve always seen that as the safe [answer]. It turns out that, if a student drops out of Johannesburg, South Africa, the consequences are very different from the consequences you would have in the Netherlands [where Ismail is from].”

Disney executive producer Asra Rasheed had to overcome the traditional values of her culture as she rose through the corporate world. As a South Asian woman (her father immigrated from India to Oklahoma), she grew up with the idea that women are supposed to “respect their elders, speak softly, and don’t cause too much of a scene.” 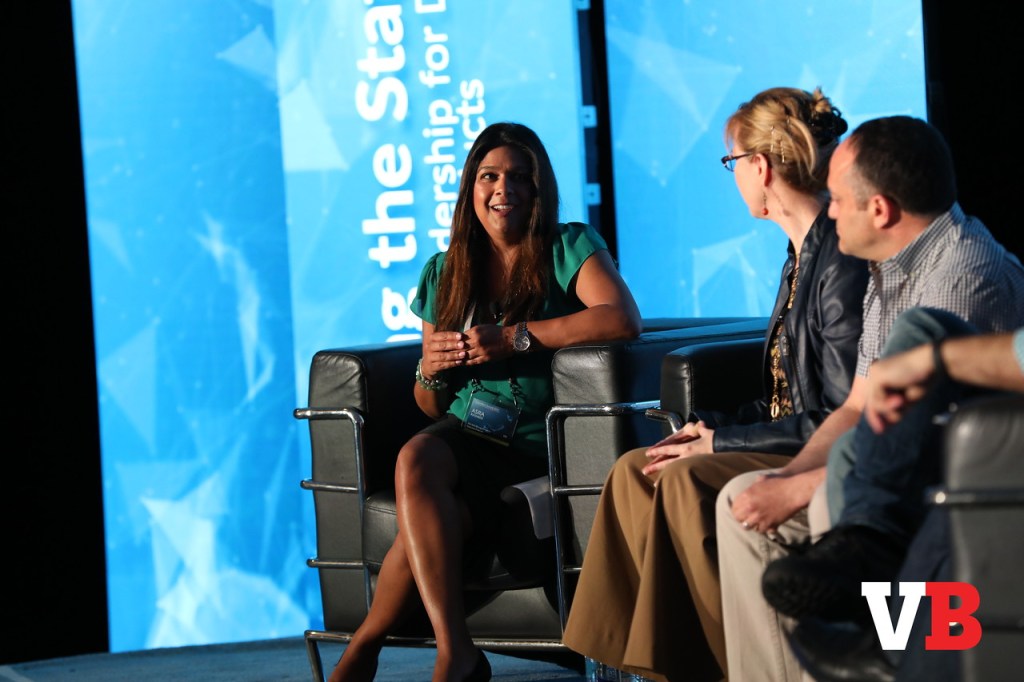 Above: Asra Rasheed (far left) at the diversity panel.

Her struggle with this came up in an anecdote about her time as CEO of educational company Reading Rainbow, where she was also the business partner of TV host LeVar Burton. One year, she and Burton were walking around at the Electronic Entertainment Expo trade show.

“Somebody came up to him, looked at me, then looked at LeVar and said, ‘Can I schedule an appointment with your admin here?’ And he pointed to me,” Rasheed told the audience. “LeVar looked at me, and I kept quiet. That was a mistake. I should’ve said something. I didn’t.

“LeVar looked at me and looked at him and said, ‘She’s my fucking CEO!’ And that was pretty awesome. … What my personal — I don’t want to say failure — but it’s something that I learned from: have a voice at the table wherever you’re at. I didn’t have that voice at times where I should’ve, particularly at fundraising.”

Over time, Rasheed learned to have her voice heard and assert herself.

On the topic of what leaders can do to value diversity, Ismail said a lot of the good leaders recognize that they’re still privileged, like the fact they speak English and live in a country that has a healthy economy. It’s also important that they recruit people with intent, and focus on the long-term culture of their organization over the short-term view of profits.

“People that do good work in the diversity space tend to understand that in the long term, having diverse perspectives, having different types of people will make their organization stronger,” said Ismail.

Asi Burak, chief executive of consulting firm Power Play, added that it’s important for leaders to be optimistic, which isn’t easy nowadays. Instead of keeping their heads down, leaders should believe in their ability to make changes, especially now.