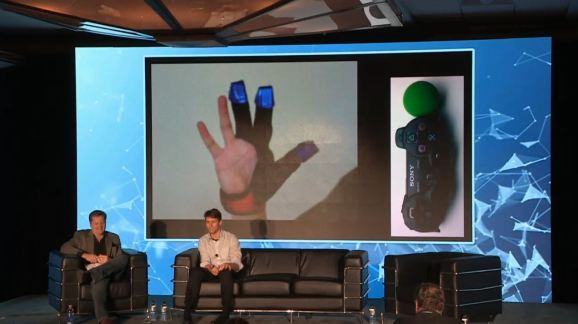 You don’t get something like PlayStation VR without a lot of experimentation. And sometimes the origins of those experiments are as obvious as you think they are.

The PlayStation Magic Lab research-and-development team has built dozens of hardware and software prototypes over the years, and one of those includes the weird touch-control glove that Tom Cruise’s character John Anderton uses to interface with his computer system in Minority Report. In a discussion at the GamesBeat Summit event in Berkeley, California, today, Magic Lab boss Richard Marks talked about how these ideas turn into consumer products after beginning life in his workshop.

“That’s really why we get up in the morning in my group is to turn science fiction into reality,” said Marks. “We’ve created a lot of different prototypes. One was generated by our interns. They saw the movie Minority Report — and the next morning they built this thing to do the same kind of input for a game system.”

Now, of course Sony has never released a version of those gloves for consumers, but a lot of the tech that went into building the PlayStation VR system started in the Magic Lab. Marks shared about the process of how the work he does feeds into a final product.

“Our researchers all care a lot about games,” said Marks. “They play a lot of games, and we know the game teams pretty intimately — so we talk to them all the time. We know what they’re interested in or what they’re being held back by. So we’ll make a prototype, and then we might show it internally to our game teams. We also might take it to a conference or to academic researchers. And we get feedback from those groups.”

Based on that input from forces within Sony and external to the company, Marks and his staff will decide to either do more prototyping for an idea, to hand off a concept to someone else, or to move onto something else. While the Minority Report gloves are an example of an idea that the company mostly abandoned, the company frequently hands off its work to other teams.

Marks gave an example of a virtual reality concept Magic Lab built for the Hollywood film The Walk. His team came up with a bunch of the fundamental ideas inspired by that movie, and then TriStar (a subsidiary of Sony Pictures) took that early work and turned it into a product for consumers. You can now play The Walk Virtual Reality Experience on PlayStation VR.

And while Marks loves when Magic Lab ideas reach the public, he does acknowledge it can hurt to give up on certain projects.

“It can be difficult if you invest a lot of your time as a researcher, and then it doesn’t end up going past some point — it’s a difficult thing to let go and realize it’s just not the right thing for your company,” said Marks. “But sometimes those ideas do come back later, so it’s not always a bad thing.”

I doubt, however, that those Minority Report gloves are one of those things we can expect to make a return.