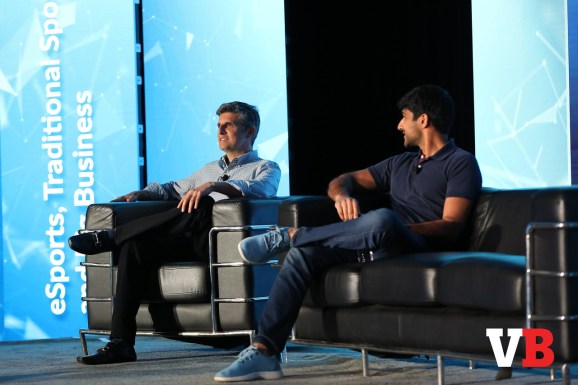 Greg Richardson (left) and Akshay Khanna at the 2017 GamesBeat Summit.

Even multimillion dollar basketball organizations don’t have all the answers yet when it comes to expanding their businesses into competitive gaming.

The worlds of esports and traditional sports collided yesterday at the GamesBeat Summit in Berkeley, California. In a panel with Team Dignitas chairman Greg Richardson and VP of strategy for the Philadelphia 76ers Akshay Khanna, both men talked about the crossover between their industries. What they found was that they still have a lot to learn from each other.

Intelligence firm Newzoo predicts that esports will grow to a $696 million business this year, a number that helps explain why traditional sports are so interested in their digital counterparts. In September 2016, the NBA’s 76ers became the first major North American sports franchise to have its own esports team. It actually acquired two separate squads — Dignitas and Apex — and merged them into one as Team Dignitas.

They compete across five games: League of Legends, Counter-Strike: Global Offensive, Heroes of the Storm, Overwatch, and Smite. Around the same time, other NBA team owners and executives also invested into esports teams. Khanna recalled the moment when many leaders in the league first became aware of esports as a growing phenomenon.

“The conversation around esports began for our owners, who are investors by nature … at an NBA board meeting, the commissioner and some of his folks were talking about esports and about the viewership numbers around competitive gaming,” said Khanna. “Everyone there has big egos, and no one was happy about people watching other people playing video games more than they’re watching the NBA Finals.

“It’s a staggering statistic that I think took a lot of owners … a little bit by storm. That’s really what began the process for us of learning about the industry and questioning whether we should invest there, but also what specific vehicle for investment.”

The 76ers believe they have the best marketing and sales team in traditional sports, and they plan to use that to help grow and monetize their esports business. Part of that is attracting big brands who haven’t touched gaming and turn them into sponsors.

But the franchise still has a lot to learn. Khanna illustrated the gulf between the behaviors of traditional sports fans and esports fans with an amusing anecdote. When the Sixers entertain their special guests, they usually bring them to a live basketball game and have them watch from highly coveted courtside seats.

That’s what they did with a League of Legends player they wanted to recruit for Team Dignitas. But they had a problem: He wasn’t really into basketball.

“We didn’t necessarily get the same reaction that one typically gets from someone sitting courtside at a basketball game,” said Khanna.

It was the first NBA game that the player had ever been to — yet it didn’t stop him from just looking down at his phone the entire time. Khanna admitted that this bruised his ego a bit. However, he also realized just how much work they need to do to understand the esports audience, and how they consume content much differently than regular sports fans.