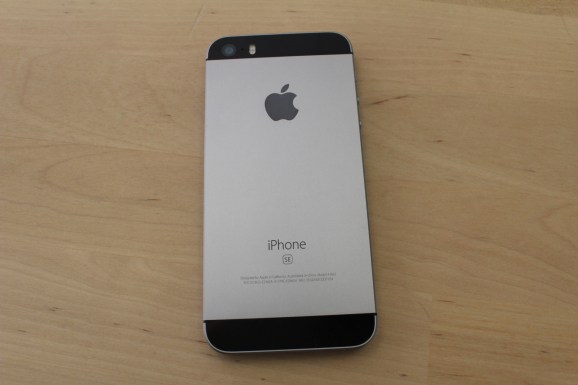 The back of the iPhone SE. The Apple logo is cast in stainless steel.

The escalating legal battle between Apple and Qualcomm may hit U.S. consumers next.

Qualcomm is preparing to ask the agency that polices U.S. imports to block iPhones from entering the country, Bloomberg reported on Wednesday, citing an anonymous source. The International Trade Commission has the authority to restrict imports of goods that violate intellectual property rights.

Apple had some older Samsung phones blocked by the agency in 2013, for example, over alleged infringement of two patents. Although the iPhone is designed by Apple, it is manufactured in Asia and must be imported to reach U.S. consumers.

Apple and Qualcomm declined to comment when contacted by Fortune.

The dispute between the two titans of the mobile business broke out after Apple started using modem chips from Intel in about half of new iPhones last year, instead of buying all its chips from Qualcomm. Apple sued Qualcomm in January, saying Qualcomm’s royalties, imposed on iPhones both with and without Qualcomm’s chip set, were excessive. Qualcomm counter-sued on April 10, accusing Apple of harming its business and breaching deals between the two companies.

If Qualcomm seeks to have iPhone imports stopped, the move would follow Apple’s decision to completely stop paying royalties to Qualcomm for the wireless technologies included in the device. Qualcomm disclosed last week that Apple was withholding the disputed fees, which total about $500 million for the second quarter. Over the previous three quarters, Apple had withheld only a portion of the fees, totaling $1 billion.

Shares of Qualcomm have lost 16% so far this year, as the dispute with Apple and various regulators around the world have threatened the company’s business. Qualcomm invented many core technologies over decades that are now used in wireless networks and smartphones. The chip maker charges royalties for a portion of the value of every phone sold, whether it contains communications microprocessor chips made by the company or by its rivals, arguing that some of its inventions must be referenced in every chip. But Apple and regulators claim Qualcomm is abusing a dominant market position to extract excessive payments.

Qualcomm’s royalty agreements are with Apple’s contract manufacturers like Foxconn, not directly with Apple. Apple has said it had been trying unsuccessfully to negotiate a direct licensing agreement with Qualcomm for more than five years.

During a call with analysts on Tuesday, Apple CEO Tim Cook explained Apple’s reasoning for withholding the royalties.

“You can’t pay something when there’s a dispute about the amount–you don’t know how much to pay,” Cook said. “I don’t believe anyone is going to decide to enjoin the iPhone based on that,” he also noted, referring to the possibility that Qualcomm might seek to have iPhone sales blocked. “I think that there’s plenty of case law around that subject, but we shall see.”