Kiip is making it easier to redeem rewards you receive through apps in real life with the launch of Clip-to-Card. Previously, when you received a coupon you had to somehow print it out or save it to your phone and show it at checkout — a tedious process. But the mobile advertising company now lets you transfer those moments-based rewards right onto loyalty cards from your favorite grocer.

“This is revolutionary,” said Kiip CEO Brian Wong, in an interview with VentureBeat. “This is the first time that any partner in the ad ecosystem has integrated Clip-to-Card into an ad unit. Usually, it’s part of a landing page, or you’d have to go to coupons.com or a separate destination. Now it lives in Kiip. You can experience it in the moment you receive the reward.” 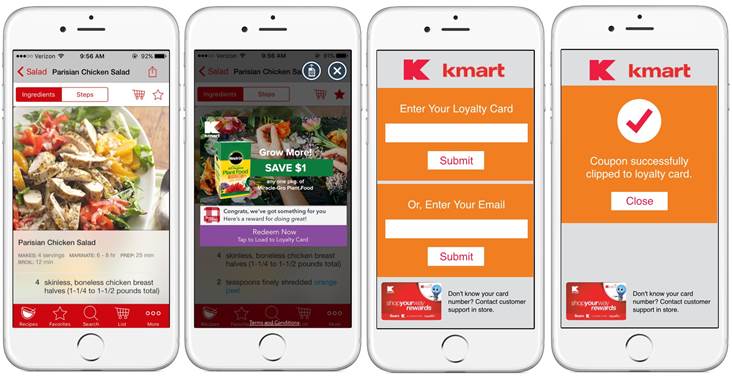 After using a Kiip-powered app, say for exercising, you might receive a coupon for Dannon or Chobani yogurt. But instead of having to print it or email it to yourself, you’ll be prompted to enter your phone number or a loyalty card number. Kiip will process the information and transfer the reward right to the appropriate card. Then, when you go to the grocery store and pay for the yogurt, just swipe the grocer card and that’s it — the coupon will automatically be counted.

Right now, while the program is still in beta, Kiip is focused on the grocery industry, a space Wong described as “the one that needed the most modernization” and on businesses that have a large footprint and loyalty programs. However, Wong revealed that a similar offering will be rolled out next month, likely targeting quick service restaurants (QSR).

Normally, when people get a coupon there’s a high likelihood they will never redeem it. At the same time, according to Statista, a 2015 survey showed that 42.8 percent of respondents looked to mobile apps for coupons. By effectively targeting coupons and giving customers mobile tools to easily redeem them, Kiip is hoping to help users cash in on a frequently missed opportunity.

Grocers and retailers will also benefit from the Clip-to-Card service because it can boost in-store sales and physical traffic.

This service is currently available in the U.S, and coupons can be used in more than 10,000 stores across the country.