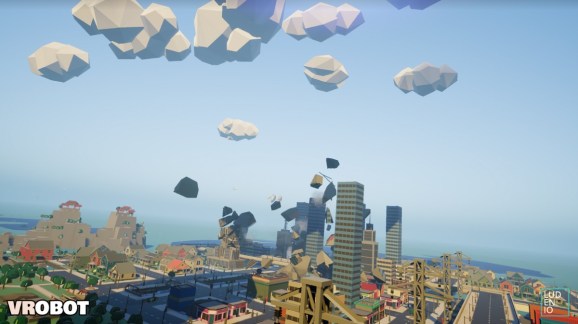 VRobot lets you go nuts in a big city with a giant robot.

Wrecking big cities in virtual reality is officially a thing. The latest developers to take their turn is Luden.io, a team of VR developers at Nival Interactive.

VRobot puts you into a giant robot at a time when driverless cars and robots are swarming the planet. Humans have built a giant robot to help them clean and reclaim their cities. You can just stomp around and cause mayhem, or use special tools like the tractor beam and tornado maker.

Then you have to defeat the SuperRobot 3000 before people can return to their homes.

I’ve come across a couple of other games where you can wreak havoc in a city. Sony’s 100ft Robot Golf also lets you go nuts in a city, playing golf with giant balls that can blast through skyscrapers..

In one VR arcade location in Tokyo, Capcom created a Kaiju simulator. You act as a Kaiju (a giant monster such as Godzilla or the beasts from Pacific Rim) and stomp through buildings in a 25 foot-by-25-foot space. It’s like you’re Godzilla, raging through Tokyo with touch controllers in your hand. You can stomp with your feet (with touch controllers attached to them) or your hands, all the while viewing a cartoon-like city where you can tear apart buildings and pull helicopters from the sky. Your job is to save the little Kaiju.