Oh, Tavern Brawl. You mean so much more than a free pack every week.

Hearthstone has become a huge hit for Blizzard on PC and mobile, with more than 70 million registered players since its 2014 launch. The free-to-play digital card game has two sides: serious competition and “playing for the lolz.” Tavern Brawl is the epitome of the latter, giving players a fun mode that (usually) doesn’t cost any money or have chance to lower your ranks. Losses don’t matter, so you just relax and enjoy the mayhem. This week, Hearthstone is celebrating its 100th Tavern Brawl. The first one, An Evil Exchange, launched on March 23, 2016. Blizzard is calling the special 100th one “A Cavalcade of Brawls.” Each class plays with the rules of a former Tavern Brawl …. and then they have to compete against each other. This is chaotic, unfair, but fun.

Tavern Brawl is a rotating mode that introduces new rules every week. Unlike Ranked or Arena modes, we’re not supposed to take Tavern Brawl too seriously. It’s just a way to mix things up, usually introducing random effects (like casting random spells every turn). So, yeah, it’s silly, but Tavern Brawl is a lot of fun. And you get a free pack for the evergreen Classic card set every week if you win at least one Tavern Brawl (and they’re a great way to complete your daily quests, too, for in-game gold).

Here which classes got which Brawls:

When you play, the game even pops in to tell you some info about your deck, like when its Tavern Brawl first debuted. Above: Pop up facts!

It’s a fun way to celebrate the mode’s history, even if playing it is a bit of a mess. Of course, Tavern Brawl is supposed to be a mess. That’s what makes it fun. But since each class is playing with different rules, its inevitable that some will have bigger advantages.

For example, Rogue gets to cast spells and put a minion on the board all at once. That pretty much has no downside, while Paladin casts a random spell at a random target every time it plays a minion. These can often be detrimental to the player, including immediately killing the card you just player.

Other decks rely on just randomness. Warlock, for instance, just has a bunch of Shifter Zeruses, which transform into random minions in your hand … which are often too expensive to actually use or too weak to play on later turns. Playing against another deck with the same restrictions would be more fair (although randomness would still play a big role), but Warlock has little chance this week against the decks that can consistently put minions on the board every turn.

And then there’s Warrior. Its deck, which gives you a Banana (give a minion +1/+1 for 1 mana) every time one of your minions dies, isn’t very good to begin with. But it also seems to be broken, since your opponent also gets Bananas. So, the other player gets the same perk as you, plus the benefits of their deck. 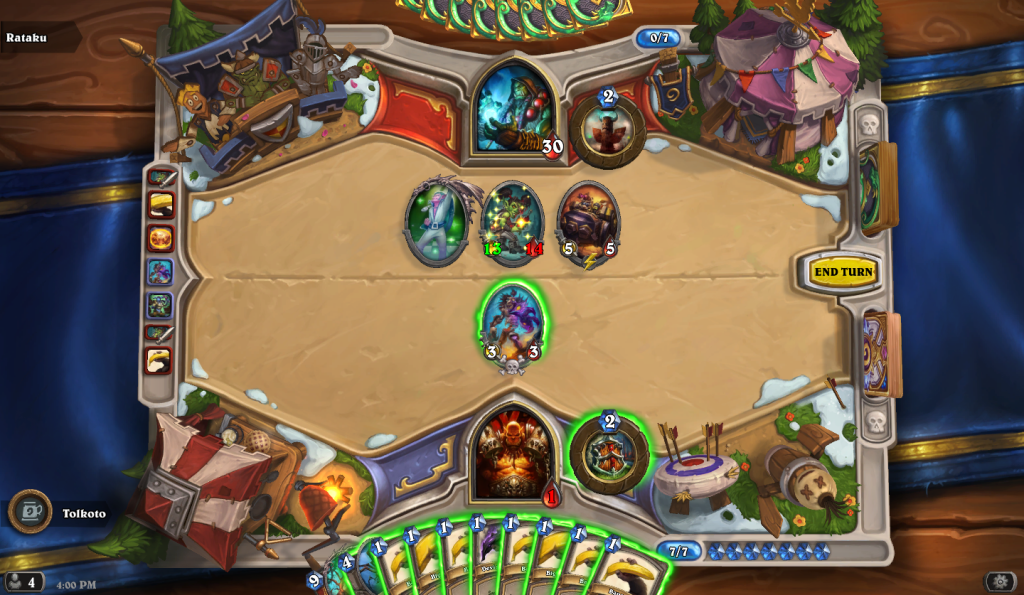 Above: What am I supposed to do with all these Bananas?

It’s not the most balanced Tavern Brawl, but it is an interesting way to reflect on the mode’s milestone. Tavern Brawl has been a big success for Blizzard, and the developer has even implemented similar modes in its other games, including Heroes of the Storm and Overwatch.