The study for mobile advertisers and app developers showed rewarded advertisements can help boost app retention by about four times. The study also found that among ad formats studied for mobile apps, rewarded video ads are the most effective for increasing retention, or how often a user returns to the app.

A rewarded advertising offer is an ad that gifts app players with virtual currency or premium content in exchange for their engagement. Players who engage with such ads during their first week after downloading an app have a 30-day retention rate of at least 50 percent, compared to the benchmark of less than 13 percent for all app users, according to the report.

That’s a big boost in retention, and it is important because the longer someone uses an app, the more likely they are to spend money on it.

“Many developers believe they shouldn’t present ads to their players too early, for fear of scaring them off,” said Ben Chen, senior vice president for developer relations at Tapjoy, in a statement. “And that may be true for traditional, non-rewarded ads that only interrupt and often annoy players. But our data shows just the opposite: that ads — at least those of the rewarded variety — are incredibly helpful tools for deepening user retention.” 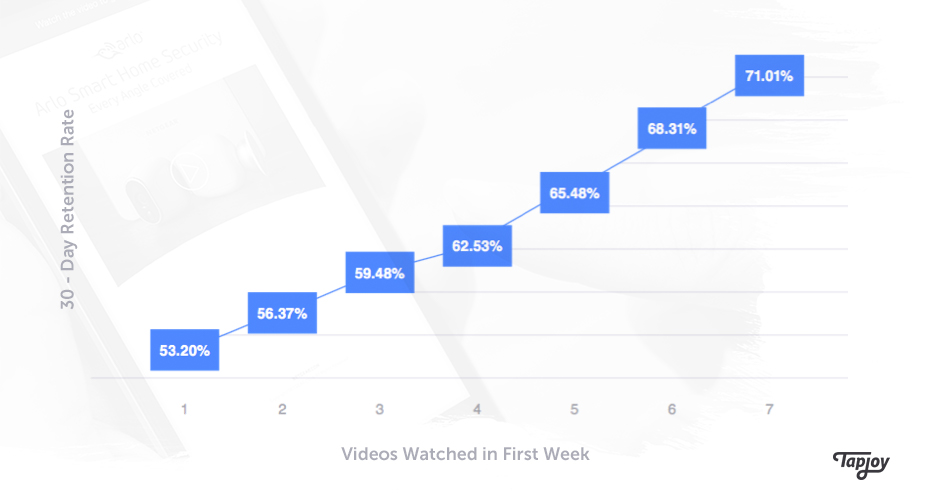 Above: Those who watch more video ads stick around longer when it comes to using an app.

The report found that two-thirds of players never use an app again after the first day they download it. That, of course, should be frightening to anybody making an app.

But the more ads a player engages with during their first week, the higher their retention rate will be after 30 days.

Full screen interstitials (FSI, or ads that pop up and take over the screen) have a dramatic impact on players’ retention rates. Like videos, merely completing one FSI in their first week increased a user’s 30-day retention rate by 300 percent over the average. However, subsequent FSI engagements do not have quite the same impact as subsequent video views, Tapjoy said.

“We’ve known all along that consumers love rewarded ads and that these ad types help improve the user experience,” said Chen. “And yet even we underestimated how dramatically rewarded ads can increase retention rates. Rewarded ads provide users with a great introduction to an app’s virtual economy and its premium content, so it helps users engage with the app on a deeper level. The key lesson that developers should take from this report is just how important it is to present players with rewarded ads during their first week of using the app.”

Tapjoy reaches more than 15,000 mobile apps and 520 million monthly active users. The company was founded in 2007.