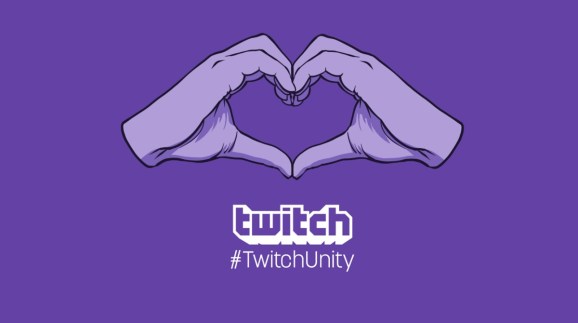 The dust has settled on a lot of gamer hate controversies, but gamers and other streamers can still be a fractious lot. To build unity with its community and promote diversity, Amazon’s livestreaming site Twitch is launching a campaign to promote diversity and inclusivity.

Twitch has more than 10 million daily active users, and it has 2.2 million unique broadcasters. The site-wide TwitchUnity event is meant to encourage the community to get along and spread a message about the importance of inclusivity.

On May 26, Twitch will encourage creators to engage with their viewers about how to maintain and improve diversity and inclusivity, while highlighting channels on the front page that exemplify a positive culture.

“The commitment that many of our creators have made to inclusivity and diversity is what makes the Twitch community special. We recognize and value this characteristic so much that ‘Welcome everyone’ is written in our brand values,” said Anna Prosser Robinson, lead producer for Twitch Studios, in a statement. “The goal of TwitchUnity is to inspire discussion, positive action, and cultural growth in our community in order to affirm and continue to cultivate a diverse and inclusive experience.”

Twitch has also create a new global emote and channel graphics to commemorate TwitchUnity. Twitch is making a T-shirt and conducting a dance-a-thon with all proceeds going to charity. It also created a video to promote the event.

Creators will also be able to download a graphics package, which includes a badge, channel overlay, and channel panel to show their commitment to the occasion. Twitch is asking its community to hold conversations about diversity and inclusivity. It is encouraging them to ask questions about times when they felt included in the community or what they would say to some who felt unwelcome. Twitch will also create its “inclusivity city” at its annual TwitchCon event in Long Beach, Calif., in October.