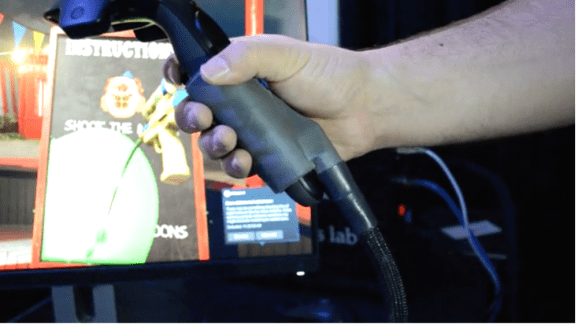 This haptic skin for VR controlelrs comes from the research lab at Cornell.

Virtual reality is great at bringing two of our senses into the digital world: sight and sound. That VR tech is already well-established and improving rapidly. However, we still aren’t at a point where we can touch, smell, or taste things inside of a VR headset. Obviously taste is the most important of these to solve (can you imagine VR Pac Man?) but for now let’s settle on haptic feedback for touch.

The Cornell University Organic Robotics Lab has created a prototype that enables VR experiences to provide tactile feedback while you play. It’s called the Omnipulse and, well, you really need to see it to believe it.

What you’re seeing above is not, as I originally thought, the soul of that Vive controller trying to escape into a human host. It’s actually a series of pneumatic tubes that connect to several pockets embedded into the Omnipulse’s synthetic rubber skin.

The skin is connected to a tube of compressed air via a narrow hose. When you trigger an action inside of VR the compressed air is released strategically into the specific pockets necessary for mimicking the physical sensation of that action.

The Omnipulse can mimic everything from shooting a gun to grabbing a hammer. It was seen running this week at GTC 2017 where it was connected to Nvidia’s Funhouse demo. Inside the virtual carnival users could feel the recoil of various weapons and the impact of reflex-testing boxing and whack-a-mole mini-games.

The Omnipulse is still a very early prototype and it honestly doesn’t seem very likely that we will one day be buying tanks of compressed air for our living rooms. However, the Cornell team’s work here is impressive in that it shows that believable haptic feedback can be achieved with relatively cheap components through a device that connects simply to your pre-existing VR controller.

Unlocking our sense of touch in VR will take time but breakthroughs like this will help us get there quicker. Now if only they had a prototype to let me taste the gun I was shooting. Then we’d really be in business.