The number of Chinese Steam users has reached 17 million, based on SteamSpy. With its current growth rate, it’s just a matter of time before it surpasses the US and become the biggest national community on the world’s largest gaming platform. Meanwhile, on April 20, the world’s biggest gaming company, Tencent, officially announced that its Tencent Games Platform will be renamed Tencent WeGame, and will no longer host web or mobile games but instead only focus on PC client and standalone games.

We are about to see a real clash of titans. In this post, I want to share my thoughts on what it means to the Chinese gaming market, and give you, my dear Western readers, some insight and background information.

The total Chinese gaming market size is $24 billion based on the CGIGC 2016 Chinese Gaming Industry report. However, as the chart below shows, the market is rapidly consolidating, and the growth rate is slowing significantly. 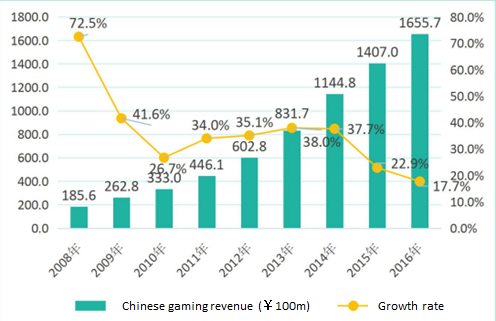 Mobile games made up half of the market while PC standalone gaming is merely 0.1 percent (~$26 million). (Please note that this report fails to identify whether the estimation included Steam or not.) But we are seeing a significant increase in the PC standalone games with a 180 percent YoY growth rate (GPC IDC and CNG 2015) — thanks to Steam. Furthermore, according to SteamSpy, we can see that Chinese Steam user base skyrocketed from 6 million 2015 to 17 million in 2017. 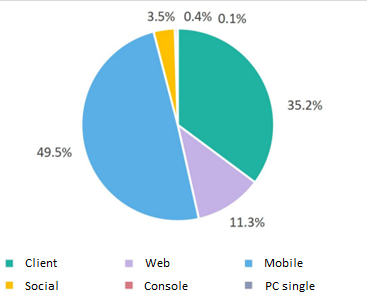 I still remember back in 2003, after purchased my first legal copy of Counterstrike in China, I registered this funky platform — Steam. At the time I hardly used it because there weren’t many official servers for CS in China, and I mainly played it with my college roommates in our dorm or in cybercafés. Now I have more than 200 games and hundreds of Chinese Steam friends. Steam achieved this explosive growth in China because of Dota 2, which requires a Steam account. Players at first found this annoying but gradually started to see a vast library of games that they did not know exists before.

With the introduction of online payment systems Alipay and WeChat Pay to Steam in late 2015, Chinese players finally caught up with the rest of the world. Grand Theft Auto 5 sold 843,000 copies in China at $30; CS:GO sold more than 1 million copies at around $7. As far as I know, Valve has no troops on the ground and did zero marketing in China. These numbers show that even though the Chinese PC market size is a fraction of the mobile or online games market, it is still an astonishing force.

Tencent can see the exact number of Steam transactions on its own WeChat pay and seems to have decided this money should be earned by its Interactive Entertainment Group. In fact, Tencent already tested the water back in early 2016 when they quietly put Don’t Starve on the shelf of TGP and sold a million copies (at $4 each) in a month. This wouldn’t be surprising if you knew TGP had more than 200 million registered users. Players have been enjoying League of Legends, Dungeon and Fighter, Crossfire, and other Tencent games on the platform since 2013. Furthermore, anyone with a Tencent QQ account (~868 million users) can easily login to any Tencent products.

At Tencent’s UP 2017, the company announced that WeGame is a platform dedicated to global developers and players, and both can enjoy its multi-dimensional services. Launch titles include Stardew Valley, Rocket League, Portal Knight, Minecraft, Cities: Skylines, with 170 games promised by the end of 2017. 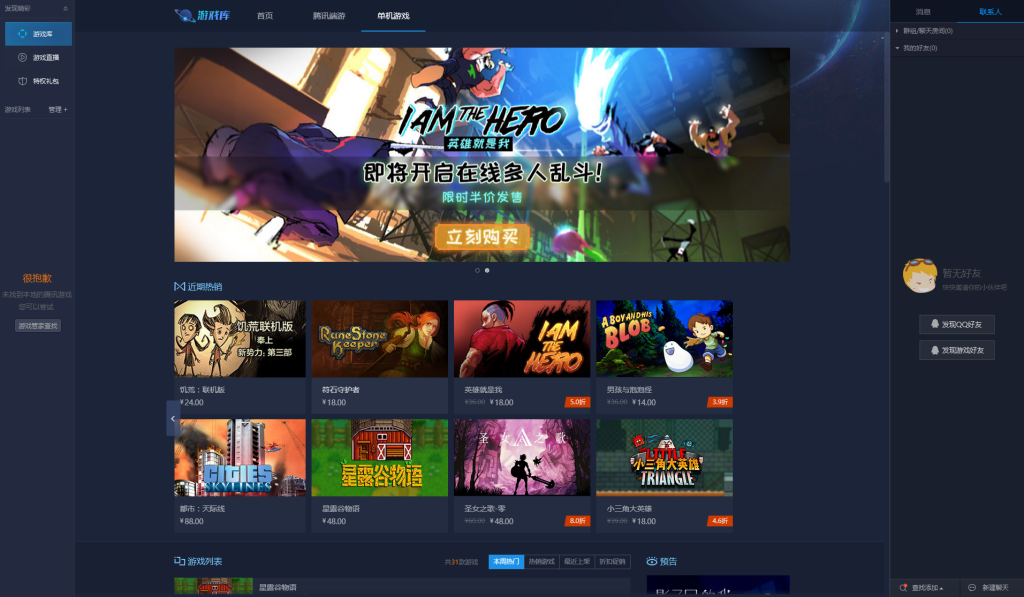 For developers, domestic and foreign, it provides services to connect Chinese players, developer support, publishing, sales, localization, and operation. Tencent also emphasizes on small companies and indie support. They require all games that gets on Wegame to be localized, and will assist developers who need help with translation.

Tencent already dominates the online and mobile games market, and this move toward the single-player and standalone game sector is the next logical step It definitely has a positive impact on players on the localization side — Steam’s current localization largely relied on publisher’s’ choice, which can be hard for small and indie devs. Tencent’s mandatory localization will become a wake-up call for publishers on Steam, in the end, more Chinese players will enjoy great games from all over the world.

But while the grand vision is one thing, players’ perception is another.

When Tencent announced Rocket League’s official inclusion in WeGame, the game’s Steam store page exploded as it got pulled from Valve’s shop. Concerned over Tencent changing the game’s business model into F2P, Chinese players spammed the review section with Tencent-bashing comments, and they protested the game becoming region-locked for Chinese players. (Rocket League has yet to be released on WeGame.) 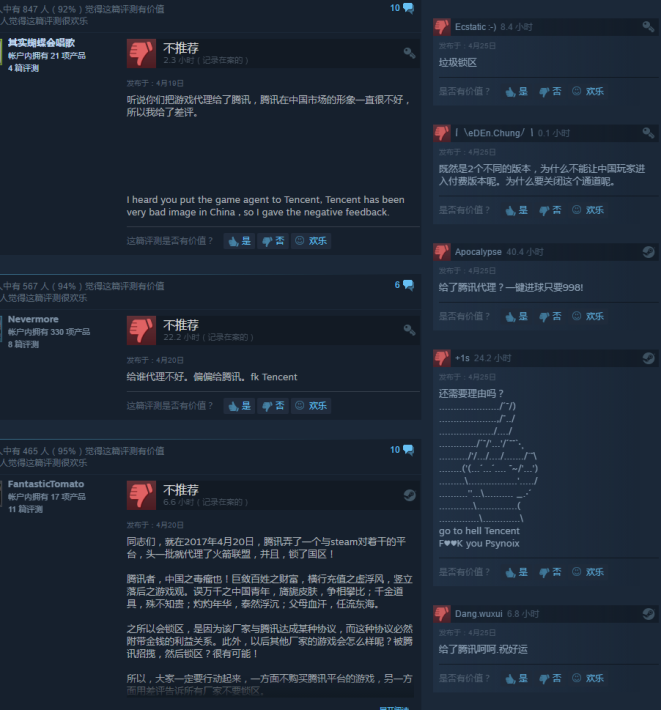 In the eyes of many hardcore players in China, Tencent does not have a stellar reputation. It was infamous for copying successful games from abroad in its early years, and lately, for its very aggressive F2P business models. There is a saying in the Chinese player community “Tencent will try to get every game, if they can’t get it, they will copy it. If they can’t copy it, they just buy the company.”

You can see this if you look at CrossFire as a reskin of Counterstrike, as well as Tencent acquiring Supercell and Riot. Industry gossip has that Riot isn’t very happy with Tencent’s recent mobile MOBA success, thinning the player base of League of Legends in China and going against Riot’s no-mobile policy.

How is WeGame going to affect Steam or the market in China? In the short run — great! Because it makes the pie of legal games distribution bigger and pushes more Western companies to think about localizing their games for China.

There is a saying in China: “He who is bare-footed does not fear the ones with shoes” Because Tencent is a Chinese company, it means it has to obey the laws and regulations of China. Blockbuster games such as GTA 5, Battlefield, or Warhammer are unlikely to pass the censorship of Chinese government. The “bare-footed” Steam will still be the go-to gray market for players who want to play the latest triple-A titles.

In the long run Steam still faces many uncertainties due to China’s ever-tightening grip on digital publications and the internet. It’s no surprise that many players are concerned about Steam’s future rather than rejoicing at having new platform.