Sony Pictures has finally turned its Jeopardy! TV show into a free-to-play mobile game with the launch of Jeopardy! World Tour on iOS and Android.

Game studio Uken Games and Sony Pictures Television Networks Games built the title for players to immerse themselves in the game show and test their knowledge with clues from the 33-year-old show.

In Jeopardy! World Tour, you can level up and unlock themed content in cities such as Paris, Rome, Beijing, London, Los Angeles, and more. Players can compete with opponents around the world or challenge their own friends in a head-to-head match. 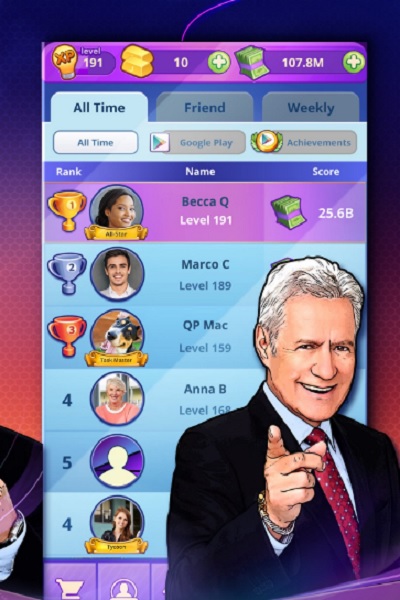 Above: Alex Trebek on the little screen.

The game has hundreds of thousands of clues in a wide range of categories and enables players to compete against other members of the global Jeopardy! community, boost their scores, and rise to the top of the leaderboards.

“Jeopardy! fans are always looking for more ways to play our game,” said show host Alex Trebek in a statement. “I know they will be very happy with this new mobile game that connects them with other Jeopardy! fans everywhere.”

“The passionate and engaged Jeopardy! audience will find so much to love in this new mobile edition of the show,” said Harry Friedman, the show’s executive producer, in a statement. “With essential elements like Double Jeopardy! and Final Jeopardy!, the mood and tone of the game will feel genuine but completely reimagined for the mobile audience.”

Uken was founded in 2008, and it has launched 12 mid-core and casual games, which have captivated a global audience. Uken’s most popular titles include Bingo Pop and Kings of Pool, which, combined, have been downloaded over 12 million times and engage over 1 million active players every month.