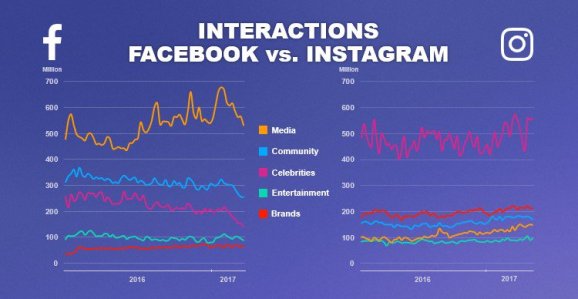 Looking at Facebook and Instagram data, and taking in over 144 billion engagements on both platforms, Socialbakers has identified a significant difference in participation rates across media, celebrities, entertainment, brands, and community accounts.

The data shows that Facebook, unsurprisingly, is a news-heavy platform. Engagement with media accounts is 2X that of community groups, with celebrities and entertainment accounts taking third and fourth place, respectively. The shock result? Brands gain almost no engagement at all on the platform — faring between 10X and 12X worse than media organizations.

Despite Instagram’s reputation as the queen and king of engagement, it has hit a few bumps in the road since its launch in 2010. For all the success the platform has seen, including the huge engagement rates enjoyed by retailers using the platform, it also suffered some losses following the introduction of a feed algorithm and a controversially high advertising injection cadence. Instagram is, according to reports, preferred by advertisers over Snapchat, although Snap Inc’s ephemeral messaging app is giving brands a free ride at present.

Of note here: Socialbakers has collected 12 billion fewer interactions on Instagram than on Facebook across the same timeframe. Facebook should be ahead by leaps and bounds here, given it has almost 2 billion monthly active users versus Instagram’s 700 million. What does that mean? It is hard to say exactly, but one thing this suggests is that Instagram’s simple engagement mechanism — double-tap to “heart” a photo — helps the app keep engagement ratios high.

Of course, there is one important point to bear in mind when it comes to Socialbakers’ latest engagement data: as Instagram’s parent company, Facebook wins either way.