Immersed Games is an early-stage edtech (educational technology) startup unlike any other, the brainchild of a diehard MMORPG player and PhD candidate Lindsey Tropf, born in the wake of a World-of-Warcraft­ triggered epiphany.

And suddenly Tropf found herself the founder and CEO of a game company.

“I had been a pretty hardcore gamer myself, but not into game development at all,” Tropf says. “I was working on more an educator path, but I realized the immense power games have for learning while playing World of Warcraft one day.”

In the midst of a game session, she turned to her husband and asked where to find something, Tropf recalls. “When he rattled off the right character, in the right city, on the right continent of the game, it was then that I realized how much we had learned, simply through the act of play,” she says. “But while I knew so much, not much of it really mattered outside of the game world.”

She started studying that phenomenon as part of her PhD work, digging into learning theory specifically, increasingly realizing that an online game could provide the perfect model for an ultra-effective learning platform—and that this power had not yet been harnessed.

“I discovered some pretty major limitations, in my view, with the educational game market,” Tropf says. “I found that most educational games were pretty shallow. It was kind of ‘answer a math problem and you get to shoot a zombie,’ but it didn’t pull on the problem-solving that games are really amazing at.”

And she found that the few good educational games available on the shelves weren’t taking advantage of the full power of the medium. They didn’t have the depth, and breadth, and potential that Tropf knew could be tapped into to keep a kid fully immersed and learning.

And so Tyto Online was born.

“I got super excited about the possibilities and started a game company,” says Tropf. “Instead of solving problems around the lore and content I had been learning in MMOs, I wanted to do it around science and other topics,” says Tropf. What Tropf developed was a futuristic MMORPG that taps into the uniquely immersive narrative experience that all MMORPGs offer, which famously keep their players always coming back for more. 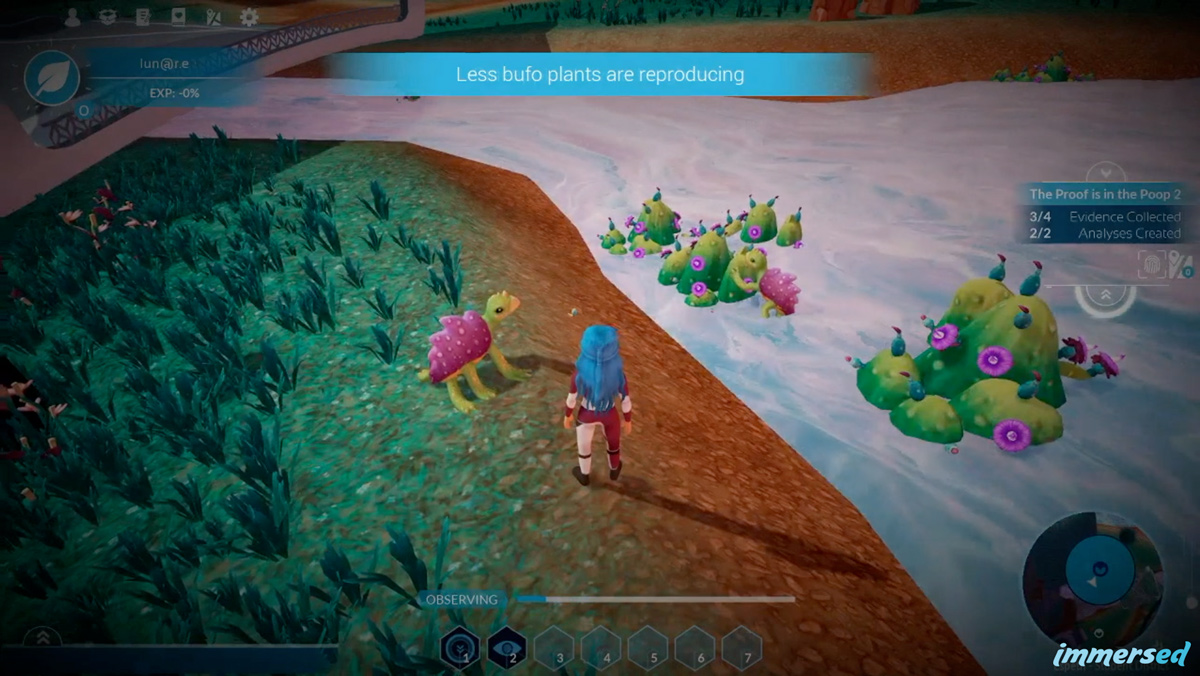 Above: Tyto Online is designed to provide insight and education that students will take with them outside the game environment.

In Tyto Online, you play as a Tyto Academy student in the year 2084. The earth has been devastated, and humanity has been relocated to Ovo, a jungle planet four years’ space travel from home. As one of the best and the brightest young minds of your generation, you’ve been recruited to help the world’s foremost scientists colonize Ovo, as well as to discover the key to restoring the Earth to a habitable state. No pressure.

The game is currently in early access, with the first module—ecology—in place.

“We have sets of quests that students do, but instead of being wrapped around general problem-solving, they’re more specifically focused on ecology-oriented problem-solving, creating food webs [the natural interconnection of food chains], fixing invasive species problems, and things like that,” Tropf says. “And as players do that, they’re leveling up in ecology, and they’re unlocking more ecology skills, and they actually get to create their own ecosystem.”

The ecosystem sandbox functions in the same way that raids do in traditional MMOs, offering infinitely replayable content. And Tropf plans to continue expanding the game via a series of educational modules. “Although I love games, it’s not simply a game,” Tropf says. “We want it to be expandable, allowing us to extend how much players can learn from games in general, and how we can extend the impact and reach that—right now—educational games don’t have, even though in theory they could.”

It’s taken a year of development for the studio to lay the groundwork of Tyto Online, including the MMO infrastructure, the story, the base game world, and the mechanics—not to mention the tools needed to build out modules iteratively and more quickly, making it easier, and faster, to start scaling up content.

“It’s kind of interesting how indie developers are building MMOs in smaller pieces now,” Tropf says. “There’s a handful of projects doing that—launching it with one module and then just building it out. We did it in a way that we’d be able to do that, and have it still make sense with the story.”

But while developers have a wealth of best practices and guides available in all corners of the Internet, the team at Immersed Games found the learning curve for game development to be significantly steeper.

“Building an MMO as a young team of developers has been very interesting in and of itself. There’s a lot of proprietary information in game development,” Tropf explains, which has made it a little challenging to figure out some best practices.

“I’m sure Blizzard has the most amazing toolsets and quest-authoring suites, but it’s not like we can see it,” she adds. “So we’re figuring out all those things on our own.”

However, they were smart enough not to leap right into the online massively multiplayer world.

“Some big studios, such as EA and Zynga, told us that we were insane to try and make an MMO for our first project, and that we really needed to learn from something a bit smaller,” Tropf says. “So we actually took part of our game—the create your own ecosystem sandbox—and we released it as its own game called Tyto Ecology, which just marked its one-year anniversary.

As a separate game module, Tropf and her team were able to answer a lot of pressing development questions, including identifying the core of the game, where the players engaged most, what they liked, and what they were learning from the gameplay—all before adding the module into the online game, where it is now. This made the foundation of Tyto Online even stronger.

Putting the “fun” in funding 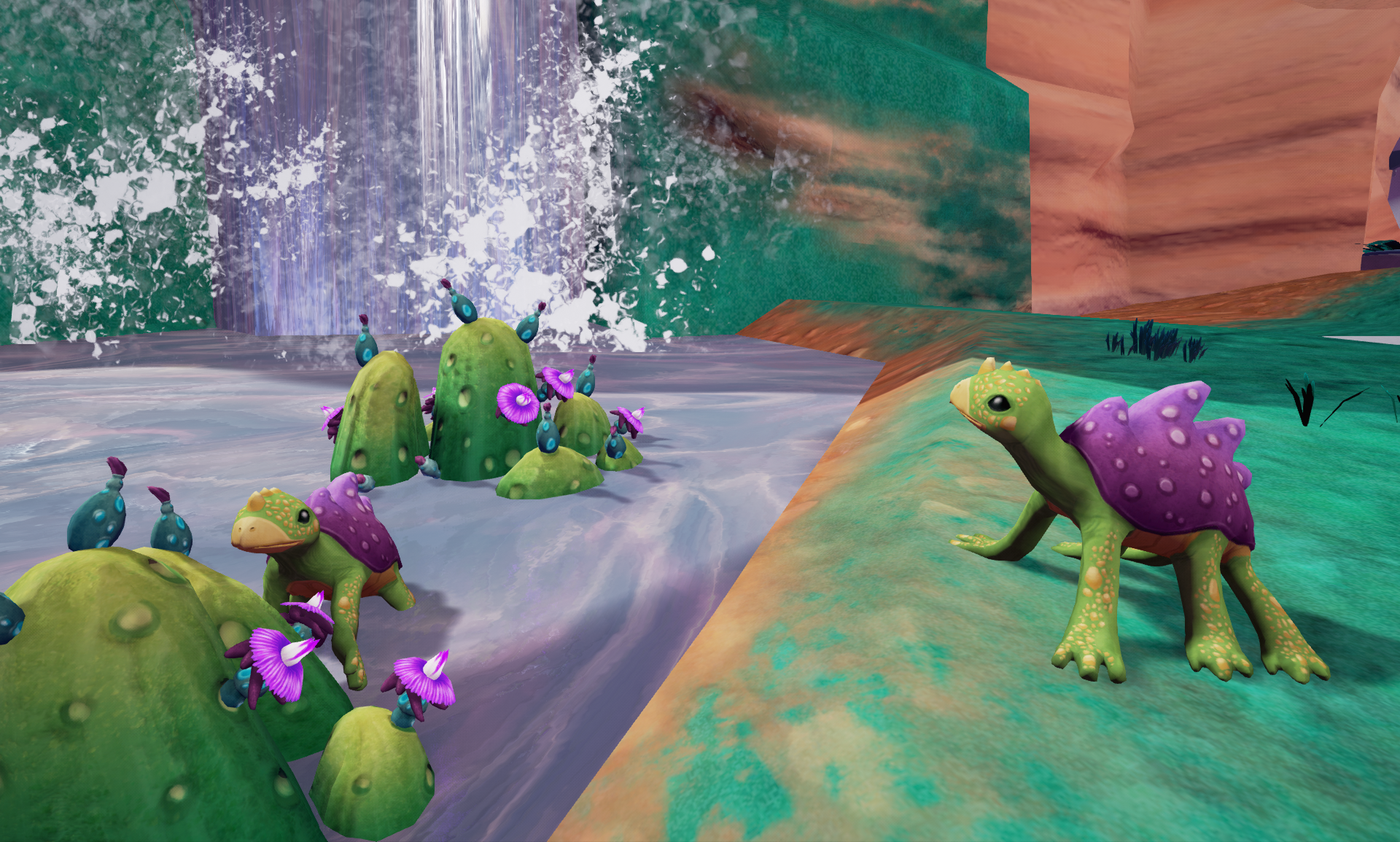 “Tyto Ecology was a pretty age-agnostic, create-your-own-ecosystem builder. So we tossed it on Steam, and we got five thousand sales in a week just from that,” Tropf says. “But we were targeting 9- to 14-year-olds; where do you find them? It’s a little bit different if you’re not so traditional.”

In terms of what the company is trying to accomplish with the game, Tyto Online is an outlier. Traditional edtech investors weren’t comfortable with the fact that Immersed Games wanted to sell to consumers, seeing it as just a commercial video game. And, according to Tropf, commercial video-game industry types are more focused on VR or mobile right now and don’t really love selling to kids—because you don’t have whales with kids.

“We kind of underestimated that challenge, because the first game sold pretty easily on Steam. But not a lot of 9- to 14-year-olds hang out on Steam, except for some really hardcore gamer ones,” she says. “You pretty much just market to their parents, but it’s expensive to reach them.”

Immersed Game’s focus now is testing both consumer and school sales, and talking to some potential partners that can help them reach each, pushing on both channels to learn which one will get their game in front of the right people, at the right time.

The infinite possibilities of gaming

Right now, the ecology module of Tyto Online has approximately 40 quests; future modules will have about the same number, depending on the subject, with a sandbox for each of them.

By the time they finish the next two modules over the next six months (genetics and entrepreneurship), and leave early access, there will be nearly an unlimited amount of game play, depending on how much time each player wants to spend creating ecosystems, breeding animals in the genetics module, and crafting and sewing items in the entrepreneurship series of quests.

But that’s just the start. Nearly an infinite number of educational possibilities can be transformed into story quests and sandboxes.

“Picture that, just continuing to expand, so that in the long run, you end up with a massive MMO over many areas of subjects that kids can play for years and learn lots of different subjects,” Tropf says. “We see this as the start of a game-based learning platform, and so ideally our long term goal is that you can learn pretty much anything in it—so I don’t really see a stopping point for us.”