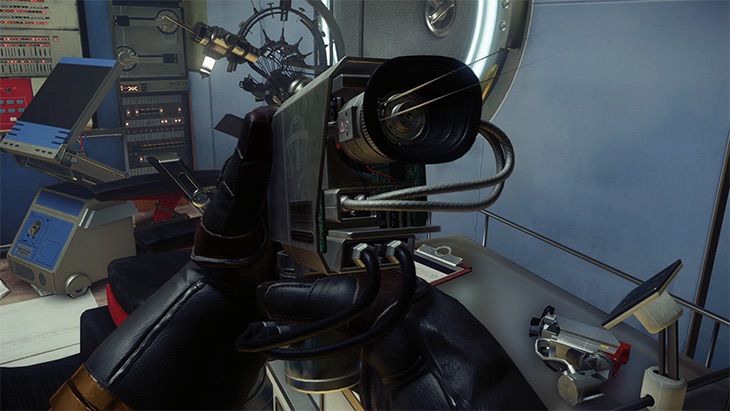 Above: Would you stab your eye just to get a few supernatural powers?

Like Dishonored, Prey encourages you to experiment with your weapons and powers. You can use the Typhon’s Mimic Matter — which transforms you into everyday objects — to possess one of the space station’s automated gun turrets or to hide from the aliens. With Lift Field, you can either launch your enemies high into the air or use it to propel yourself to hard-to-reach places.

The powers you collect can have consequences outside of combat as well. The turrets, for example, can be a valuable ally because they automatically target any aliens around them. But if you harvest too much Typhon DNA, they’ll turn on you. The other human survivors on Talos I will also react to you differently.

However, you can avoid that by simply not learning any of the alien abilities. It’s possible to finish the game without them.

The mix of Typhon powers, tools, and conventional weapons offer a degree of freedom and flexibility that isn’t seen in many games. But that’s not a signature of Arkane’s treatment of Prey. These complex and unscripted interactions are an intrinsic part of immersive sims, which first emerged with PC classics like Ultima Underworld, Thief, and System Shock. The seminal System Shock series from Looking Glass Studios was a huge inspiration for Prey in terms of creating a tense sci-fi setting.

Though Arkane tried to make other types of games before, it keeps coming back to immersive sims. Everything in its catalog, from Arx Fatalis to Prey, have detailed worlds with interlocking mechanics that leave room for the player to improvise. The studio most recently demonstrated this with Dishonored and its sequel.

One of the lessons the Austin team learned from working on that series is the importance of easing players into these digital playgrounds, especially for those who haven’t tried an immersive sim before. 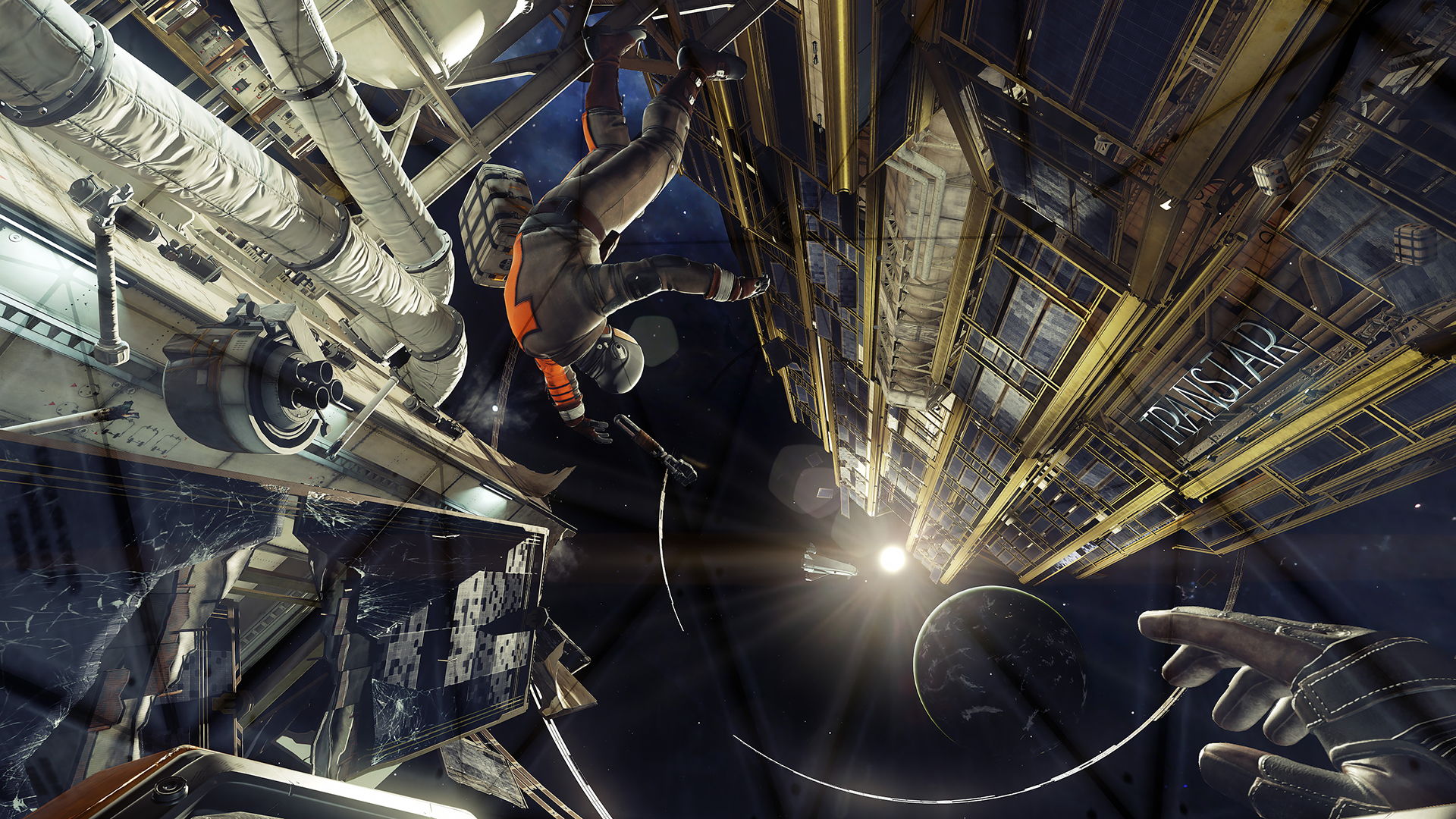 Above: Prey also takes you outside the space station.

“Unless the game invites players to do so, it’s not always obvious that [for example] you don’t have to find the key to this door,” said Bare. “You can look around and find an alternate way, or you could hack the door. Maybe you could blow the door up. I think lots of other games train players [to think], ‘There’s only one solution to this problem. And you have to try to discover what the designer had in mind.’

“Whereas we’re like, ‘No, there isn’t one solution. You can improvise a solution to this.’ You might be able to come up with something we don’t even know about because of all the systems interacting together. Part of the challenge is letting players know that it’s possible. That was challenging on Dishonored. And it’s still challenging on Prey. But we learned we have to present [those possibilities] to the player very early on.”

Yet Arkane didn’t want to overwhelm players with too much information. So the developers decided that for the first few hours, you’ll only have access to your human abilities. Eventually, the story introduces more nuanced tools like the Neuromods and the Psychoscope (a device that scans the different Typhon enemies for their powers and weaknesses). 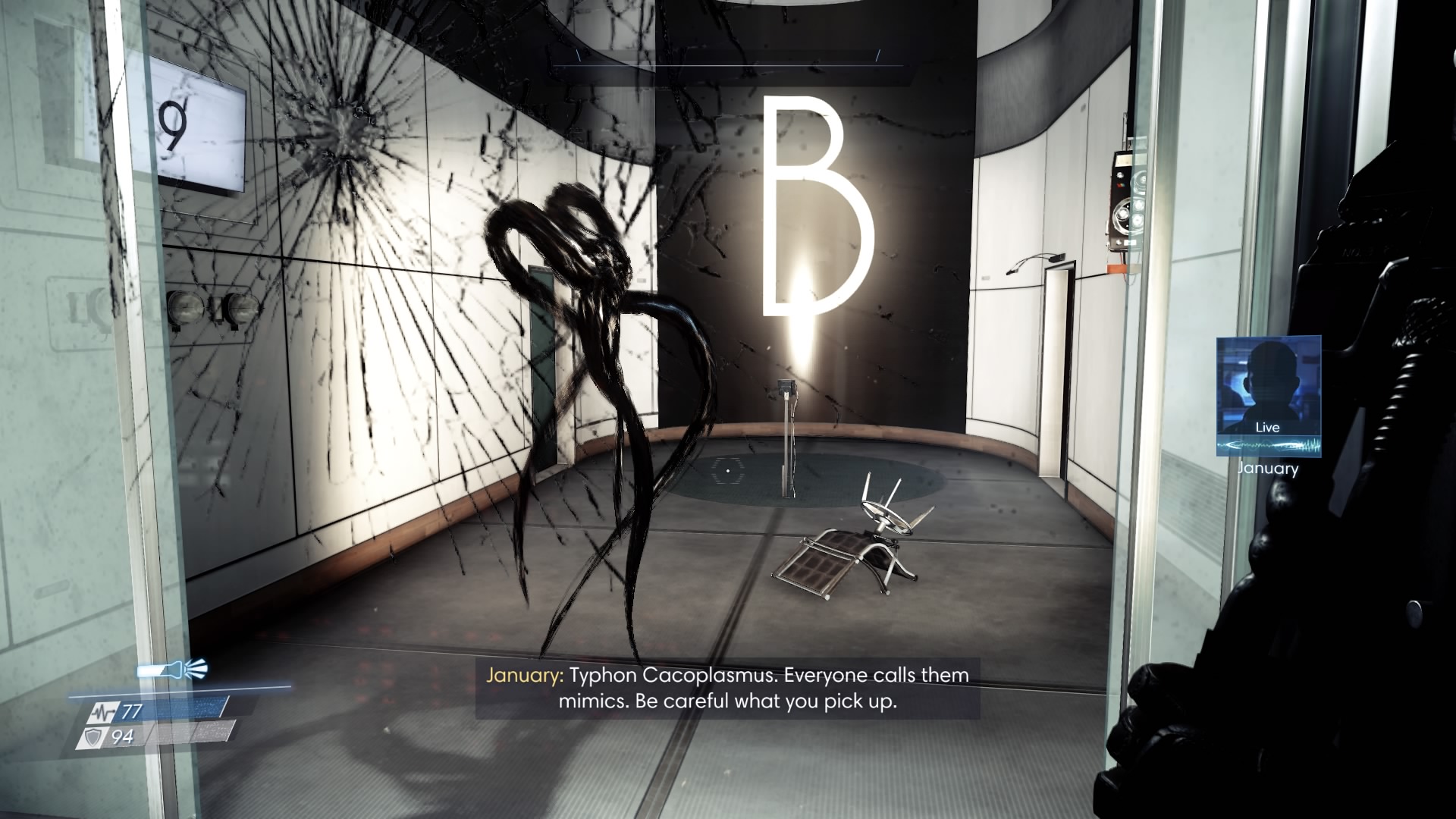 Above: The Mimics can transform into different objects.

However, planning for what abilities a player might combine in any given situation (and thus rewarding them for their curiosity when it works) is an impossible task. The best Arkane can do is just spend a lot of time playing through the game to identify any interesting combos it should support.

“And the things that don’t [seem cool], we cut and get rid of,” explained Bare. “You know you’re in a good place when different people on the team are arguing about things like, ‘This power is the best!’ and ‘This other power is useless!’ And the other person is saying the opposite. … That means different people are finding different ways to play.”

Ideally, the goal is to make players feel like the only limit is their imagination.

“The best feeling is feeling like you’re playing a game where anything is possible, even if it isn’t literally true,” said Bare. 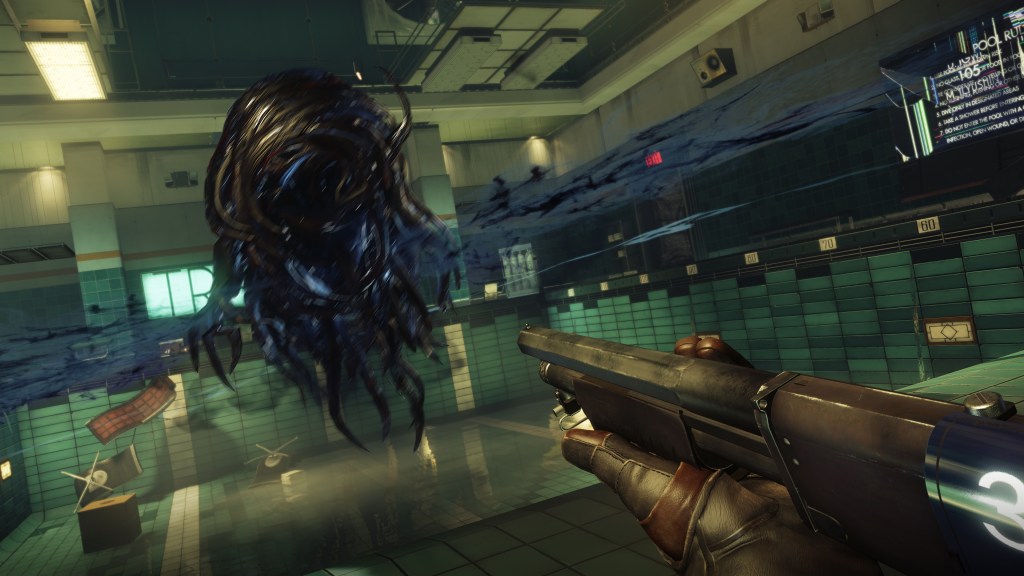 Above: The Typhon come in different shapes and sizes.

If you look through forum threads or YouTube videos about Prey, it’s clear some fans still mourn the loss of Human Head’s Prey 2. That put Arkane in an awkward place when it came to managing people’s expectations for the game.

“It’s tricky because, admittedly, the original Prey was a really interesting game. And the pitch and demo of [Prey 2] was cool, too,” said Bare.

But the designer reminded GamesBeat that the company really only makes one type of game: immersive sims. That specialization is one of the reasons he joined Arkane in the first place. It’s a genre few developers try to tackle.

“For one thing, [immersive sims] are really hard to make because they’re so complicated. But they’re also super rewarding, and they ask a lot of players,” said Bare. “If you’re playing a linear shooter where your instructions are just to keep moving forward and shoot everything that moves, that game doesn’t ask a lot of you, right? It doesn’t demand a lot of the player.

“But playing a game like Dishonored or Prey is a little bit like playing a musical instrument. The game asks a lot of you, but it also rewards you tremendously, more than the other kind of game that I’m talking about.” 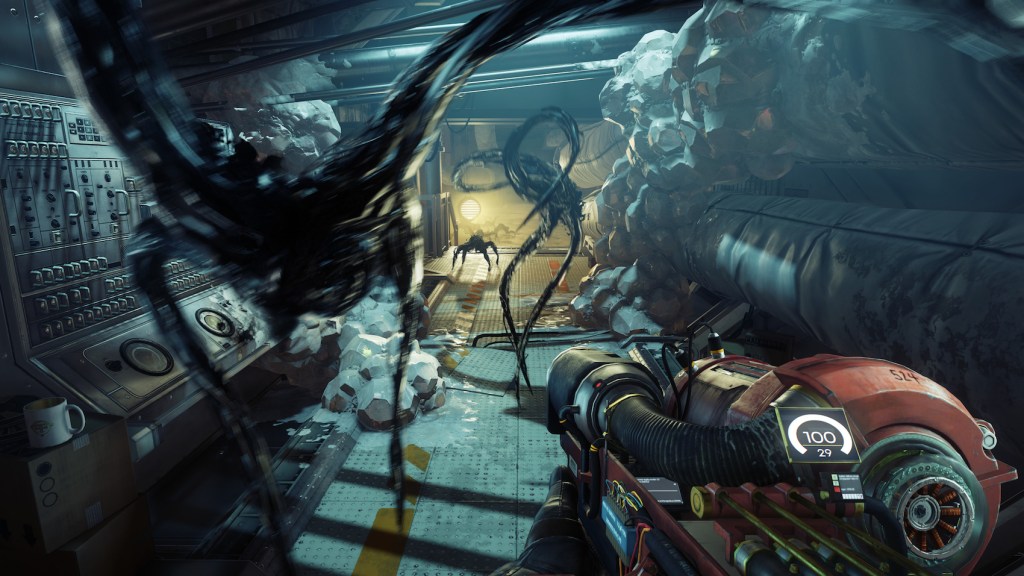 Above: The GLOO gun traps the Typhon in a hardening foam.

From Arkane’s point of view, these types of games always have at least two things in common.

“They always have a strong sense of place — that’s where the ‘immersive’ part comes in the word immersive sim,” Bare added. “They always feel like a very cohesive, well-built world where you can look around and deduce the story of the place and [figure out] what happened. Everything has depth.

“It’s like an iceberg: You see the tip, but you know there’s so much more below the surface in terms of world-building. You believe that you’re in a real place. And the second part is those layered, super-rich game mechanics, which just translate to the player feeling like, ‘I can do anything in this world. There are these rules and systems, and I can understand them and make a plan. And when it works, I feel this magical, almost sublime experience.’”

The new Prey can never live up to the promise of the cancelled Prey 2. Instead, Arkane is carving a new identity for the beleaguered franchise (whose origins actually stretch back to 1995), one that builds on the beloved immersive sims that came before it. If the reboot is successful, it’ll further cement the studio as a top-tier developer — and maybe even give the Austin team something to brag about to the Lyon office.

As for why they chose to use the Prey name, Bare said the reason was simple: It’s a great title for a video game, and “naming video games is hard.”