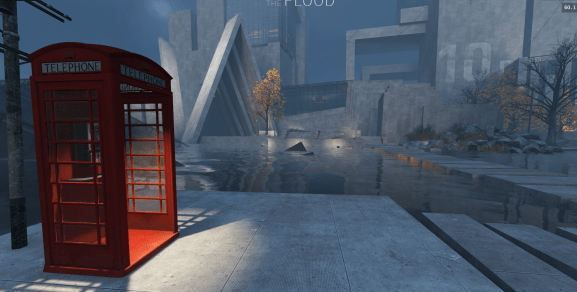 WebGL 2 Demo - "After the Flood" by PlayCanvas

The virtual reality industry needs to temper its obsession for all things high fidelity.

Last November, I pointed to underwhelming content as the biggest threat to the VR industry. You know, the kind of experiences that woo you with novelty but fail to hook you in for another ride — which is the story for the majority of VR content. And earlier this month, I also covered WebVR gaming and have tried to push it forward as the sweet spot that developers and publishers should be prioritizing. But for that happen we need to address the elephant in the room: This obsession with high fidelity and accompanying misconceptions about what users need or want from VR, as well as what makes VR content effective.

This insistence on high fidelity has been woven, and by design, into the very fabric of how creators “should” frame the value proposition of immersive content. But it conveniently ignores great low fidelity VR cases that dispel this myth like A-Blast by Mozilla.

“High fidelity is simply the wrong focus,” WebVR developer and AFrame contributor, Fabien Benetou says. “There is a marketing hype from hardware vendors to showcase the latest features their graphic cards can support. Those visual demos are indeed visually always amazing but they are just tools for sales. It sounds very cool to say you have “the best” when in truth we all only need “good enough.”

The current push for VR, at least this time around, is thanks to some very big tech players like HTC and giant gaming engines like Unity that have a vested interest in trying to shape an industry as it emerges. The idea is to hinge the emerging tech on their choice of hardware and platforms, and so secure their relevancy for the next wave to come. One of the key ways to do that is to play on their strength, which is premium performance, and to therefore position premium at the center of the VR value proposition.

The industry, however, responds with its own impartial terms and takes shape according to actual market realities. That’s why we need to re-think our assumptions on what good or effective content is or can be, unless we want to waste a lot of time and resources pushing the wrong recipes.

In other words, it’s best to use an iterative approach that discovers what makes VR content stick.

Above: A-Blast debuted to dozens of Mozillians in December 2016 at the Mozilla All-Hands event in Hawaii.

But instead, we’ve seen the market jump into the deep end with high fidelity as the operative frame that consumers are expected to adopt. The positioning is all wrong because the landscape is still fuzzy, which leaves a lot of game and content studios out in the wilderness, in an awkward position in terms of financials, forecasts, and a scary gap between the two.

“For a nascent medium like VR whose interaction and cinematic vocabulary is evolving, creatively we need rapid experimentation and feedback: people need to be able to prototype their ideas quickly, share their experiments with a large population of users with diverse VR experience, and learn from the feedback they get,” says CEO Karan Singh of JanusVR, an immersive web browsing and design platform.

The most engaging VR content so far doesn’t owe its success to high fidelity but instead by being social, collaborative, and multiplayer, as Kevin Zhang, Partner at Upfront Ventures, recently posted. Whether the killer apps the industry is sorely searching for are high or low fidelity will likely be moot and arbitrary. What’s more important is whether the content connects us to fun and shared experiences or not.

“What really engages users are short, fun games and especially when it comes to WebVR, games where they can compete against their friends online.” Thomas Ragger, Partner & Tech Director at Wild, the studio that developed the Konterball, a WebVR game featured on Google’s WebVR Experiments. “I think VR is just another step further to get people connected in virtual space no matter where they are located physically.”

Indeed, a study released this week by Greenlight Insights found that two-thirds (67 percent) of U.S. consumers are interested in social VR experiences, a figure that jumps to 78 percent when asked of those who’ve already tried VR.

Other key factors include discoverability and accessibility, which is why I’ve been such a strong advocate for WebVR. This wrong emphasis on high fidelity has had the collateral damage of labeling WebVR as low fidelity and that it can’t hold its weight in offering rich immersive experiences.

And yet anyone who’s been following the advances in WebGL, the JavaScript API that WebVR is rendered in, has probably taken a glance at PlayCanvas’ WebGL 2 demo, After the Flood. There’s nothing low fidelity about it.

It’s particularly irksome when that dismissal of WebVR on account of the low fidelity stigma robs the market of the otherwise huge advantages that WebVR’s open source and cross-platform nature offers in the form of flexibility, freedom, and production agility compared to the closed-system alternatives that are trying to run the show by framing the industry in a particular way.

“There’s no reason why a WebVR game can’t look broadly similar to a native VR title. Yes, you’re running on JavaScript, but in the majority of cases, it’s going to be the GPU that’s the bottleneck, not the CPU,” Will Eastcott, CEO at PlayCanvas, told me. “And WebGL can actually drive the GPU very efficiently.”

The industry needs to stop trying to build Ferrari experiences and instead shift the priority to experiments in design and being able to “prototype quick-and-dirty,” as Singh puts it. WebVR is the best setting for that kind of iterative experimentation to happen. It’s easier to learn, faster to create, cheaper to produce, and more flexible on how its distributed. It’s the ideal sandbox for indies.

“It’s been indies that have been the source of most of these games. And if there is a market for WebVR games, it will be indies that find it. They can innovate, take risks and move fast. And if money is to be made, the bigger studios and publishers will surely follow.” Eastcott told me.

But to make that happen, a lot of people need to be deconditioned on their working assumptions on what makes VR content effective.

Here’s how James Baicoianu, the principal engineer at JanusVR, describes the opportunity: “The problem a lot of WebVR projects have faced until recently is that that it’s been hard to convince serious game developers and artists to take the web seriously. Any hardcore C++ programmer will scoff at the idea of doing 3D graphics in JavaScript, and will swear up and down that it’s just not possible, there’s no way it will work. So all the people with the professional-level knowledge and skills just weren’t working on it – it took a mix of amateurs, indie game devs, and demoscene hackers to show what WebGL was really capable of, and now there’s no denying that in the right hands, with a good team and the right budget, you can make WebGL and WebVR experiences that can take the user’s breath away just the same as any native experience.”

Content creators need to take a serious hard look on what really works and resist imposing their preconceptions on what users expect to experience or what the gold dust of immersive content really is. That’s what’s key at this stage in the industry when the priority should be on discovering the new designs, hooks, and socialized experiences that will make VR stick.