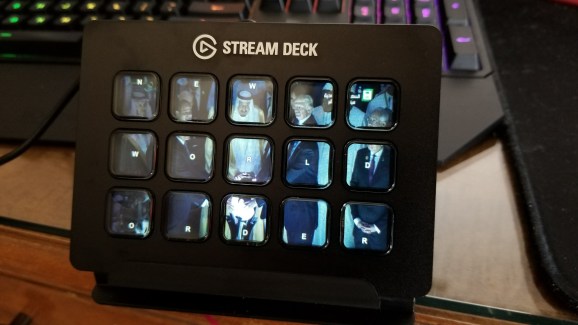 If you want to get ahead in life as a streamer, you need to touch a few orbs and use the Stream Deck.

Livestreaming video games is a big enough business now that companies have started making products to cater specifically to those creators, and that is leading to more bespoke tools that should lead to a higher level of polish on sites like Twitch and YouTube.

Above: You can customize your Stream Deck with images and functions.

Elgato, which makes well-regarded capture cards that enable you to put video from a console onto your computer, is diving even deeper into this scene with its new $150 Stream Deck. This is a simple-looking device that features 15 programmable buttons that have an LCD screen behind each. The idea is that broadcasters can customize the Stream Deck and each of its buttons to instantly do a number of functions with Twitch or the OBS broadcasting software. For example, you can program a button to set Twitch chat to subscribers only or to play a piece of media on OBS. Essentially, it gives livestreamers a control center to do a lot of stuff that previously required a lot of extra programs running in the background or automated bots to manage.

“We’ve been in the content-creator space for a while now,” Elgato Gaming general manager Julian Fest told GamesBeat. “So, we’ve grown along with YouTube and Twitch and the creators on those platforms. And Stream Deck was born from an observation that streams and a lot of the interactive elements are getting way more automated. And those are great tools, and it makes a lot of sense when you have one person doing so much. But we felt that all of the automation was taking away from people’s personality, and we wanted to build something that enabled people to react more spontaneously.”

So now, with Stream Deck, you can have music and animations play when someone subscribes using automated tools, but you can also play anything you want at the push of the button. But Stream Deck is actually quite a lot more powerful than that.

“If I look at tools that are used in broadcast television, you have video switchers and big boards with a ton of buttons that cost thousands of dollars. And, realistically, Stream Deck is more powerful than any of those because it is powered by software. Any key can be configured to do a bunch of things. Even if the footprint is smaller, the number of actions is much higher.”

The device runs on Elgato’s Stream Deck software, and the company plans to continue updating that program to support more functions. And with the built-in option to turn each of the 15 keys into a folder, you can have up to 210 pre-programmed actions ready to go at any time. For a one-person operation or even a small group, this is a tool that could potentially have the same capabilities as a dedicated broadcast control station like NewTek’s TriCaster.

“It should be able to fulfill all the same things,” said Fest. “And our goal is to listen to community feedback and add more and more integrations.”

This is clearly something that full-time streamers could potentially get a lot of use out of, and Elgato is targeting that audience. But that is part of an effort to appeal to a wider market.

“It has to appeal to the top streamers to be successful because in this community, there’s a massive trickle-down effect between what the big broadcasters are using and what beginners and smaller channels want to use,” said Fest. “But we do think it makes a lot of things a lot easier. You don’t have to alt-tab out of your game. You can just do it with the press of a button.”

But Elgato and Fest admit that this isn’t a magic bullet to creating amazing content. It still requires you to do the hard work yourself.

“Stream Deck is not going to help you be more creative,” said Fest. “If you are creative, it’s going to make your life a lot easier. But you have to bring with you a certain dynamic character to appeal to people in the first place. And no amount of technology will help you there if you’re not a great entertainer.”

But Elgato is expecting that for those of you trying to build yourselves into that kind of entertainer, you’ll find that the Stream Deck is a useful aid.