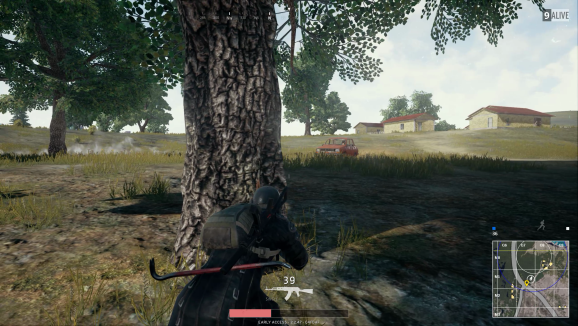 It's like bullfighting, but the bull is an a-hole in a beat-up sedan.

You don’t kill 99 digital strangers without making a few bucks.

PlayerUnknown’s Battlegrounds is making bank. We already knew this because the Battle Royale-like online multiplayer shooter has topped the best-selling games on Steam for more than a month. But what does this translate into in dollars? Well, in April, Battlegrounds generated $34 million, according to market-intelligence firm SuperData Research’s estimates. That was enough to make it the No. 7 highest-grossing digital PC game in the world last month behind perennial moneymakers like League of Legends and World of Warcraft.

On Steam, Battlegrounds is still the top-seller, and it could maintain that spot throughout the summer as it regularly draws a huge audience on video sites like Twitch and YouTube. It’s sales success likely has to do fun it is to watch, either in videos or livestreams. In Battlegrounds, you must dive out of an airplane onto an island with 99 other people. Your goal is to outlive everyone else as the safe area on the island grows smaller and smaller. You can also either play on your own or with up to three teammates.

It’s a simple concept, which is one of the reasons so many people like watching it. Unlike in games with more esoteric rules, like Dota or League of Legends, you don’t need a lot of familiarity with the specific mechanics or intricacies of Battlegrounds. You know that the person you’re watching needs to survive, and they are likely going to spend a lot of time looking for weapons and equipment to help them do that.

And because you always understand what is happening, it’s easy to go from seeing someone do something cool to buying the game to try it yourself. Like this kill right here where the guy jumps from the driver’s seat to the passenger seat so he could start firing before the car came to a complete stop.

@austin_walker Tyty~ Spent 5 min in that tiny circle w/one other person. Tense af. Still, this was my fav moment of the game =P pic.twitter.com/3ovCn4aIKH

That’s slick, and I really want to go play some Battlegrounds now.