Activision and developer Vicarious Visions have re-created the originals with modern graphics in a bid to get nostalgic gamers to plunk down another $40 for the three original titles that started the phenomenon. Back in 1996, Crash Bandicoot saved the PlayStation as it competed against the Nintendo 64 and Super Mario 64. Crash sold more than 6.8 million units, and Sony adopted Crash Bandicoot as its mascot in its TV commercials.

Naughty Dog made the first three Crash titles, but then Universal Vivendi ended the licensing deal with Sony in 2001. Later Crash titles didn’t have the same flair as the originals. But Shawn Layden, president of Sony Interactive Entertainment, wore a Crash Bandicoot shirt on stage at Sony’s PSX event in December 2015. Everyone in the audience thought he would announce a new game based on the franchise. But he didn’t. He was just wearing a shirt. Crash Bandicoot also got a lot of attention when it was built into the gameplay of Uncharted 4: A Thief’s End. 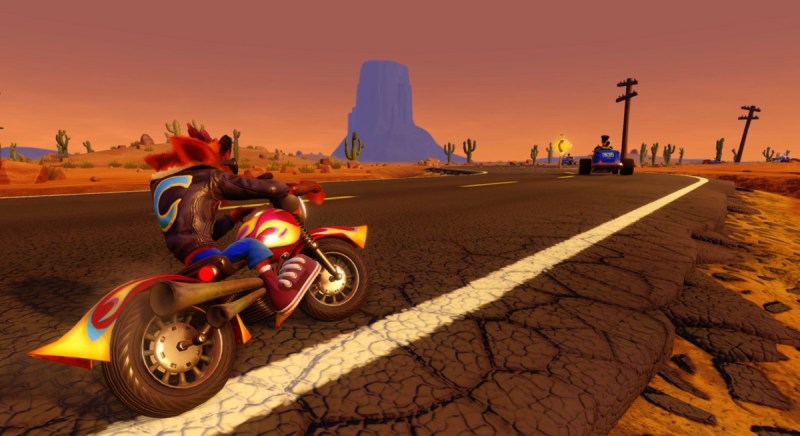 Above: Crash Bandicoot in the Orange Asphalt level.

“This is not your typical remaster,” said Dan Tanguay, game director at Vicarious Visions. “We’ve put a lot of attention into the details. It is a re-creation as much as a remaster.”

The games have brand new high-definition graphics (1440p at 30 frames per second), with better lighting, animations such as rain, and re-created cinematics. The fur on Crash looks far better than it did in the originals, and that fur technology has been applied to all of the characters in the game who need it.

But the gameplay is the same for the most part, with a number of improvements built into the entire series. For instance, you can play all three games with analog sticks or digital pads, even though the first two games had to be played with digital pads only. 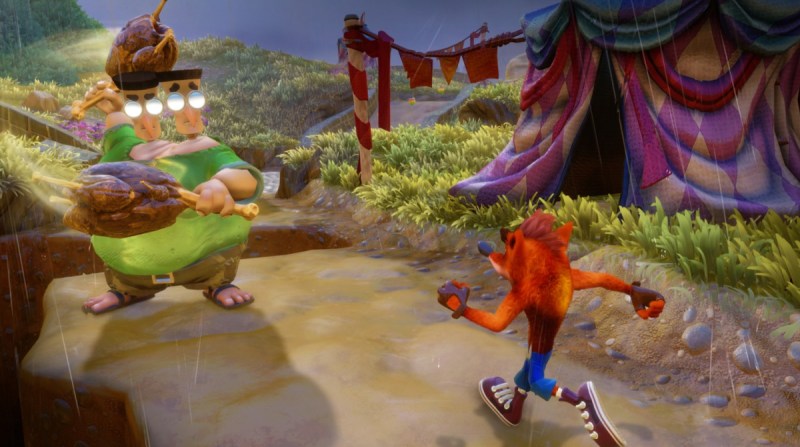 Above: The turkey legs are an upgrade in the new Crash Bandicoot.

“We wanted this to feel like a visual showcase,” Tanguay said. “In the originals, you felt as if you were playing a cartoon.”

The humor is still there. In Warped, I saw death animations for Crash that brought back memories, like when Crash gets sent flying and hits the screen of the TV (or the fourth wall of the game) as if he were hitting a glass window, and then he slides down it. There are more than 100 such death animations in the game.

So much of Crash is about funny things built into the game’s fabric. You can defeat the ogres and then jump on their big stomachs and bounce, making a funny sound. And if you shoot one of the characters, his clothes disappear and he stands there in his underwear, embarrassed.

“We put a lot of focus on the charm of the game,” Tanguay said. “Above all, we feel the gameplay has to feel right.”

The new collection features a remastered game soundtrack, packed with all the didgeridoos, xylophones, and thumpin’ bass lines of the original games. The games have a unified save system and unified checkpoint system. Plus, improved bonus levels and time trials everywhere will add to the adventure of the main story. 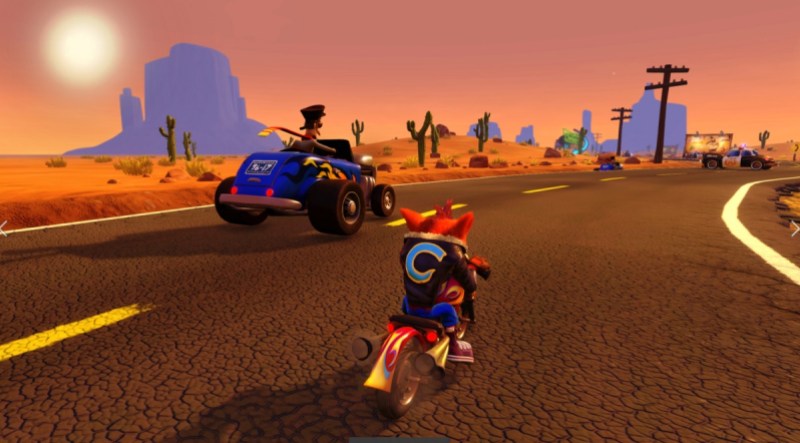 Above: You have to watch out for obstacles in this motorcycle ride.

The game uses the Alchemy engine that powers the Skylanders and Marvel Alliance games. The team started with the original animated skeletons in the game, but it couldn’t re-use the old graphics. The environmental artists at Vicarious Visions went to town on creating modern graphics for things like tents, blades of grass, and the rain. The voice overs weren’t reusable, so Vicarious went and found the older actors to re-record the sounds where possible.

“We have to be true to the original,” Tanguay said. “And we have to make sure the quality lives up to today’s expectations.”

I played three of the 100 levels. That’s a lot of content that will take even veteran players hours to play. I found it easy to pick up and play. I was bouncing around on the platforms, trying to get across gaps without killing myself. It took me back to the days when you had to keep your undivided attention on moment-to-moment gameplay.

You have to get your timing right. In the Orange Asphalt level, I rode a motorcycle through a desert rode with a bunch of obstacles. I had to deal with precise timing, tapping the analog stick to get onto jump ramps or avoid police cars moving sideways. It was a lot of fun, and it felt thoroughly modern to me in terms of visuals and gameplay.