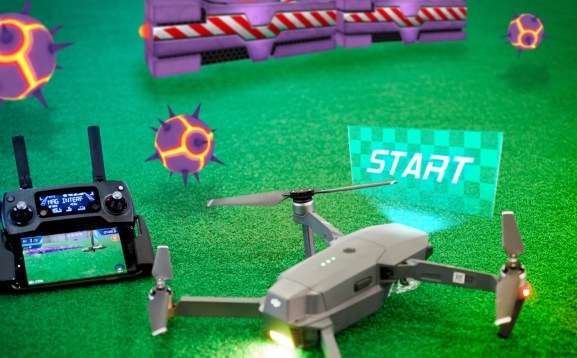 Even as regulations have ramped up for commercial drones, they garnered some time in the limelight at the Mobile World Congress earlier this year. Industry revenue is estimated to reach more than $6 billion in 2017 and exceed $11.2 billion by 2020, according to market researcher Gartner. The Consumer Technology Association thinks that 2017 will be a big year for drones on the consumer side, estimating a 40 percent increase to 3.4 million drones bought by hobbyists, increasing the audience for drone-based games and apps.

Drone Prix creates an AR race course that overlays whatever environment the drone is in, generating collectable prizes and obstacles for the player to avoid. In a partnership with drone creator DJI and Epson, Drone Prix is optimized for DJI drones and uses the Epson Moverio BT-300 Drone Edition smart glasses. Players can stream a first-person view from their drone’s built-in camera using DJI controllers with a video screen or via their smartphones with the DJI GO app. However, the Moverio Drone Edition glasses can also provide a more seamless heads-up display.

Others have tried to create AR racing games for drones, such as Drone n Base, which sought $70,000 on Indiegogo in 2015 to create its own drone as well as the corresponding game for players’ mobile devices. The project ended up raising only about $25,000, but it nevertheless moved forward with manufacturing and released its iOS app in beta earlier this year in January.

Drone Prix is single-player game for now, though it does feature a leaderboard, and comes with 30 obstacle courses in various levels of difficulty. It’s too early to say whether the game will take off, since it seems that most people are using their drones to make films or take selfies. But if the Drone Racing League is any indication, there’s interest in more applications, which Edgybees is likely counting on. According to CNBC, 28.2 million viewers watched DRL’s first season on ESPN last year, and the second season which airs this June will be broadcast in 75 countries.