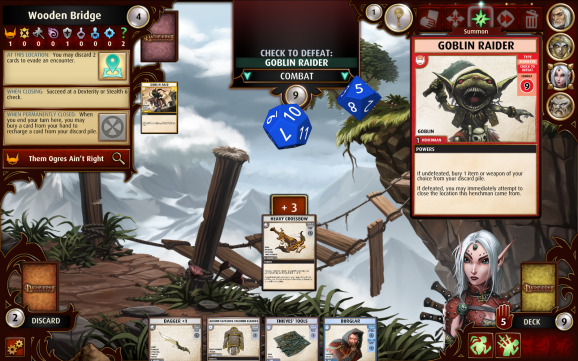 Pathfinder Adventures is coming to PC.

Obsidian Entertainment is bringing its mobile release to PC, a platform it has plenty of experience with.

The developer announced today that Pathfinder Adventures is coming to PC and Mac on June 15. The adaptation of the Pathfinder Adventure Card Game (itself an adaption of a pencil-and-paper role-playing game) came out for mobile last year as a free-to-play app with in-app purchases. The iOS version is the No. 403 ranked card game in the Apple App Store, according to App Annie.

Gamers best know Obsidian for PC and console role-playing games like Pillars of Eternity and Fallout: New Vegas. This move for Pathfinder Adventures could make it available to Obsidian’s core fan base.

“With Pathfinder Adventures we are bringing the magic of the award-winning tabletop card game to your PC, letting you easily play any time you want,” said Obsidian Entertainment chief executive officer Feargus Urquhart in a press release sent to GamesBeat. “I’ve always loved the way Pathfinder Adventure has brought what I enjoy in tabletop RPGs to card games, and I am very proud of how we have captured the depth of the game, while adding in options to expand upon the experience for both newcomers and lovers of the tabletop game alike.”

Obsidian is also working on Pillars of Eternity II: Deadfire, which earned more than $4 million on crowdfunding site Fig. The RPG sequel is set to come out in 2018.