Owlcat Games made a lot of tabletop role-playing game fans happy with its announcement of Pathfinder: Kingmaker last week. The upcoming RPG for PCs will be the first that uses the Pathfinder system, itself a decade-old take on Dungeons & Dragons‘ fantastic 3.5 Edition rules, and accomplished RPG writer Chris Avellone (Planescape: Torment, Pillars of Eternity, Torment: Tides of Numenera) is in charge of the story.

But the studio buried the lede when it didn’t share one important component of this project: It’s coming to Kickstarter. Owlcat is seeking $500,000 from fans of Pathfinder and old-school role-playing games like Icewind Dale II to add more to the base game, which the studio is making for My.com, the publisher of online games like Warface. GamesBeat was told that the Kickstarter was going live this week, but Owlcat has now pushed it back to “early June.”

This Kickstarter, to be clear, isn’t to fund Kingmaker — it’s to add to it. Owlcat hopes to increase the number of companions (and give them more depth), classes (Pathfinder as a number of roles for characters to play), dungeons and other areas to explore, events, and new quests that aren’t part of the published Kingmaker adventure path. The effort will also include goals for music and voice-overs.

“The game will happen,” an Owlcat representative said. “But the team wants to make it larger than the current secured budget allows so they are reaching out to the Kickstarter community.”

In an exclusive interview with GamesBeat last week, Owlcat head of game development Oleg Shpilchevsky and creative director Alexander Mishulin spoke to me about the Kingmaker (which follows the tabletop RPG adventure path of the same name), the scope of the Kickstarter, the environment for crowdfunding video games in 2017, and working with Paizo, Inc. on Pathfinder.

GamesBeat: From what I understand, you want to talk about a Kickstarter project?

Oleg Shpilchevsky, Owlcat head of game development: Yes. Not only Kickstarter, but one piece of important information is that we’re going to launch a Kickstarter campaign next week. Right now we’re aiming at the beginning of June, starting on [June 1 or June 2], for the public launch.

GamesBeat: What’s the Kickstarter going to be? Will it be for special content, additional goals? It’s not just Kickstarting the full game, correct?

Shpilchevsky: Luckily, we have some money from our parent company that’s allowed us to build a solid prototype. Right now we have a good-enough quality sample of gameplay that we can go to show for the first time at PaizoCon. It’s a convention that will be held at the end of the week in Seattle. Once again, we’re lucky enough to have the money to complete a solid game. We’ll be able to ship that to our players.

But there’s a big temptation to add a lot of new features and content to the game. The universe is very big, with a lot of reach and depth to it. We can’t squeeze the entire wishlist into the budget we’re currently on. We’d like to ask Pathfinder fans and RPG fans to support us on Kickstarter, which will let us add a lot of additional features. We’ll have more companions, more depth to the companions, more dungeons and wilderness to explore, … and more new quests and content by famous Pathfinder authors and RPG authors.

GamesBeat: Is the base game going to be on Kickstarter, or is that already funded?

GamesBeat: How much money are you asking for on the Kickstarter before you start reaching stretch goals?

GamesBeat: It’s higher than I’ve seen for a lot of other RPGs lately. Are you worried about meeting that number?

Shpilchevsky: You’re right. The majority of Kickstarter projects are starting at a lower level. But we’re making a game on the same level of quality and content as something like Obsidian’s [Pillars of Eternity] and Larian’s [Divinity: Original Sin] games. Their Kickstarter campaign started at over $1 million. To be honest with you, we’re certainly concerned about the money. Nobody knows, at the beginning, whether something like this can be successful or not. But we hope this initial goal is quite reasonable. We’re really trying to put a lot of interesting things in the first stretch goals. There’s a lot of content and resources we can pull in to work that out. 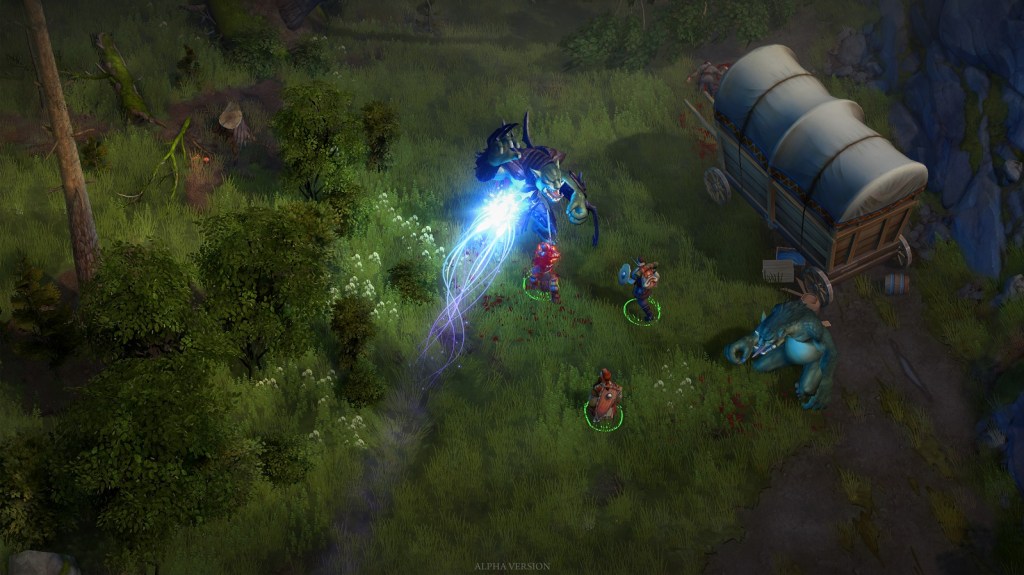 GamesBeat: So the additional content is characters and dungeons. Will there be additional items as well?

Shpilchevsky: Yes, everything you mentioned and a lot more. Starting with our unique selling point feature, the Kingdom. That’s one reason why we chose the Kingmaker adventure path, because it has a very unique and interesting feature where you can build and develop a kingdom of our own. Despite the fact that the base kingdom will be included in the game, we want to be able to develop this and make this a really great feature. Our initial stretch goal on Kickstarter will be devoted to the kingdom system.

GamesBeat: Are the characters going to be from that adventure path, or are they going to be some of the other iconic characters other Pathfinder projects?

Alexander Mishulin, creative director: We have Amiri, the iconic barbarian. She was present in the adventure path, and she’s present in our game. But most of the characters are our own. We’ll probably add some more iconic Pathfinder characters as NPCs, and maybe even as companions. That’s under discussion right now. But we’re certain that Amiri will be a companion, with a lot of backstory and events happening around her throughout the game.

GamesBeat: You’re doing this just on Kickstarter, correct? Not Fig or Indiegogo.

Shpilchevsky: We’re aiming at Kickstarter because it’s a tried method. It’s brought us a lot of RPGs so far. We’ve decided to go that way.

GamesBeat: There’s been a lot of Kickstarter fatigue, but because you’re only really Kickstarting additions, do you think that players and fans will be more receptive to this model of Kickstarter?

Shpilchevsky: Just to make it clear, the game isn’t finished yet. Right now I can say we’ve more or less completed a vertical slice. We’re going to show that at PaizoCon. It’ll just be a small part of what we’ll eventually have at the end. The overall gameplay time of what we have is about four hours. The final game will have about ten times more. That’s our goal.

It’s essential for us to get support from gamers, because then not only will be able to add more features and content to the game, but it’ll show that there’s demand for this type of game. There’s interest among gamers. So it’s a different level of motivation. With Kickstarter money, we may add a lot of stuff that reveals all the depth and richness of the Pathfinder world and help us kick its epicness — right — to the stratosphere. But we want to be honest at this point. If we have support from our parent company, it would be unfair to also tell potential backers that we need their money to make the game too. 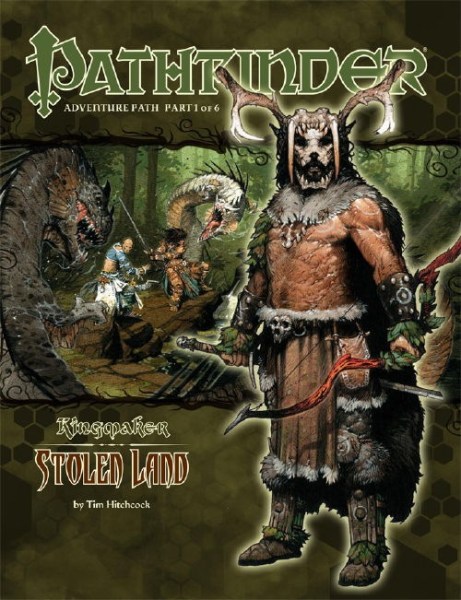 Above: Stolen Land is the first part of the Pathfinder Kingmaker adventure path.

GamesBeat: Will Kingmaker include every part of the adventure path: Stolen Land, Rivers Run Red, Varnhold Vanishing, Blood for Blood, War of the River Kings, Sound of a Thousand Screams? Or are you starting with one part and adding the rest as goals or episodic content?

Mishulin: No, it will be the whole game — the complete story is present in the base game. It’s based on the adventure path, so you can expect some twists and turns, some expanded content. Chris [Avellone] is really helping us with fleshing out the whole story and building up on it. But the whole original story is here.

Shpilchevsky: The base game that we would, all that — it’s not something that we have all of right now. But it’s something that will be completed if the Kickstarter campaign is successful.

GamesBeat: How involved is Paizo? Is its staff helping you adapt the story?

Mishulin: We’re working in close contact with Paizo. We exchange dozens of emails every day. We’re very glad that they’ve chosen to be so involved in development, because we’ve gotten tons of interesting ideas and suggestions from them. The main reason they’re so closely involved is to preserve the feeling of Pathfinder in our game. Fans of the game can be sure that the quality of the story will be intact.

GameBeat: Why did you want to make a game in the Pathfinder universe?

Mishulin: We’ve played a lot of tabletop RPGs throughout the years, starting from the ’90s, when there wasn’t very much material in Russia, and we’d all gather around in our dorms and stuff like that. Pathfinder is great. On one side it’s very familiar, but on the other side it’s a completely new world with very interesting kingdoms. We’re reading about each kingdom, and they’re mentioning all the stories and adventures behind them. Paizo is great at writing campaigns, their adventure paths. It’s just what we play, and what we really wanted to make as a computer game. It reminds us of the games we played in the past.

GamesBeat: Are you making your own game engine?

Shpilchevsky: We’re making our own engine. We considered — it’s based on Unity, to be clear. A lot of people have assumed we might use the Infinity Engine, that a lot of old RPG games were based on, but that’s not what we’re doing. We’re using Unity and building some of our own infrastructure on top of it.

GamesBeat: What character classes can people play? Are you adding any extra classes as part of the Kickstarter?

Mishulin: Pathfinder is very big, of course. It’s enormous in its scope. We’re starting with all the classes in the core rulebook. We’re also adding a couple more classes from other sourcebooks.

Shpilchevsky: We’re keeping that secret right now. We have a couple of more classes coming, but we’ll reveal that as part of the Kickstarter campaign.

Mishulin: Also, there will be some classes as part of the stretch goals.

GamesBeat: How are you liking developing for the Pathfinder rule set so far?

Mishulin: It’s great fun. First of all, every member of our team is playing the campaign. We have several campaigns running. A lot of designers and writers, everybody. They know the systems quite well. We’ve all been playing for a very long time in various RPG systems, like Dungeons and Dragons or Pathfinder and others.

Shpilchevsky: We became legends on another development team because we can play Pathfinder during our work time.

GamesBeat: For each of you, what’s your favorite class to play in Pathfinder?

Mishulin: It’s a bit difficult to answer for me. Usually I’m the game master, so that’s my favorite class. But if I’m playing as a player, it’d be cleric.

Shpilchevsky: He’s a very ruthless game master. Just a month ago he killed off our whole party. As for me, I like the alchemist. It’s a really crazy class. You can kill both your enemies and your friends that way.

Update, 1:59 p.m. Pacific: Owlcat first told GamesBeat that the Kickstarter was going live this week, but after the story posted, the studio said the crowdfunding effort would now begin in “early June.”