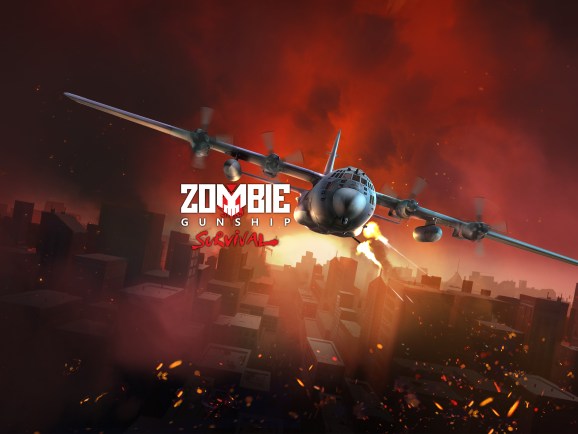 Zombie Gunship Survival has done more than just survive. After last week’s launch on both iOS and Android, it’s garnered over 2 million downloads.

Developed by Limbic Software and published by Flaregames, Zombie Gunship Survival is a top-down shooter where players, from the vantage point of the titular gunship, shoot zombies and defend civilians and soldiers on the ground. Limbic specializes in mobile games, and has developed such titles as TowerMadness, TowerMadness 2, and the first Zombie Gunship. According to App Annie, Zombie Gunship has hovered in the top 50 action games in the Apple App Store for the past year. It’s a strong showing, considering it was released in 2011 for iOS.

Flaregames was founded in 2011 by Klaas Kersting, the former CEO and co-founder of Gameforge, one of the first distributors of free-to-play games in Europe. Originally, Flaregames intended to develop its own mobile games, but market saturation pushed the company to adopt a publishing model instead.

In an interview with GamesBeat last year, Kersting said, “We were late to the market. But now we are in a really great position to scale what we have executed on in the past. We have a great portfolio of titles coming.”

Flaregames’ first success came with Royal Revolt, a tower defense mobile game, and has since published several other mobile games, including Royal Revolt 2 and Olympus Rising, a massively multiplayer online game. The publisher can now count Zombie Gunship Survival among its successes. It’s been well received, ranking in the top five games in the Apple App Store in 96 countries, and Flaregames reports that over 91 percent of App Store reviews have given it a rating of five stars.