The Europeans are heading East. A new report from venture capital firm Atomico has found that European game companies doubled their share in the Chinese mobile game market from 2014 to 2016.

Atomico said that Europe accounts for 35 percent of game funding rounds, or more than any other region when it comes to the numbers of companies getting funding. And about 36 percent of all mobile game publishing companies are based in Europe, more than any other region. So far this year, 62 game companies have received funding in Europe. Since 2012, 20 game companies have had initial public offerings in Europe, but typically the proceeds from those deals are small. 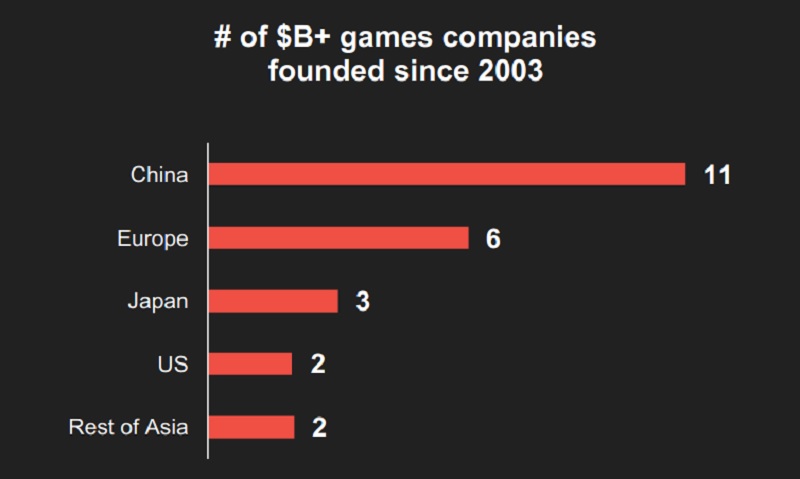 Above: China leads the way in the creation of billion-dollar game companies.

The report also said 24 billion-dollar game companies have been founded in the last 15 years. China produced 11 of them, followed by six in Europe, three in Japan, two in the U.S., and two in the rest of Asia. Atomico itself led investments in Supercell and Rovio.

And 69 percent of all revenue generated by mobile game companies with headquarters in Europe comes from outside the region. But only 7 percent of earnings come from China, and that’s a missed opportunity, said Mattias Ljungman, the cofounder and partner at Atomico, in an interview with GamesBeat.

“The events that are happening in games in China are just incredible,” Ljungman said.

Niko reports that China has more than 600 million gamers, with the total market of PC, web, mobile, and console games adding up to $24 billion in revenues. That makes China the largest market for games in the world.

Tom Wehmeier, the head of research at Atomico, told GamesBeat that European games studios have room to grow in China. Europe has only 4.6 percent of the iOS games market in China. In fact, about 93 percent of the total amount spent on iOS games in China is spent on Chinese games. That’s even more of a local focus than in Japan and South Korea.

While China will have a huge impact on the overall game industry, Atomico believes the opportunity for other regions is also huge. And while it is hard to penetrate China, the companies that find the right distributors and do their homework can succeed, Wehmeier said.

Above: The top 20 M&A deals in the game industry.

The top 20 largest games merger and acquisition transactions of the last five years have created $46 billion in exit value. Of that amount, European targets accounted for 70 percent of the value. Looking at the origin of the buyers, 55 percent of deal value came from strategic Chinese acquirers, illustrative of growing interest from China. More than 100 European game companies have been acquired since 2012. And since 2015, Europe has accounted for 39 percent of all game company exits.

“The games market is one of the most fascinating, vibrant, and enticing in the world right now, and it’s moving fast,” Wehmeier said. “Mobile has taken over to become the most valuable segment, and there are now more than 2 billion gamers worldwide.”

But Atomico believes that European game companies have to seize the opportunity.

“European games companies can still build a big games company without going to China, but if you want to be considered a world-leading studio today, you can’t ignore it.,” Wehmeier said. “It is here that the most valuable companies of the next decade will need to cut their teeth.”