Mobile app development seems like a crapshoot, with millions of people trying to create a big hit in the app stores. But that dream is not entirely elusive. Pollen Velocity Capital, which provides financing for mobile app developers and handles user-acquisition campaigns, and mobile app intelligence provider Priori Data found in their research that 4,648 app developers made more than $1 million in 2016.

“The emergence of the torso of the app stores is good news for the app economy, showing that success on mobile is no longer the preserve of just the very top tier of developers,” said Macmillan, in a statement. “It’s great to see emerging digital businesses from all corners of the earth play on a global stage empowered by a democratized app economy.” 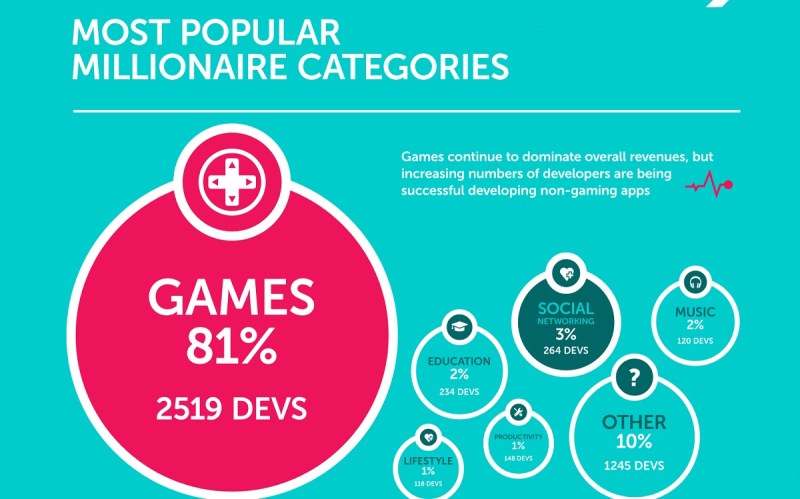 Above: Pollen VC found that 81 percent of the $1 million revenue apps were games.

Almost 30,000 developers made more than $100,000 on the app stores in 2016. Pollen VC collected global data on a publisher level, and so the $1 million threshold includes all companies who apps generated more than $1 million in revenues across all of their apps in 2016. The rankings data comes from Priori Data, which tracks data on a worldwide basis for thousands of developers and then interpolates the data for the whole market.

“Although mobile gaming apps still mint the most millionaires, it is encouraging to see more non-gaming apps crossing the million dollar revenue threshold,” said Patrick Kane, CEO of Priori Data, in a statement. “It is a reflection of three major shifts in the last year: The stores have improved subscription products and economics for developers, developers have become more sophisticated in leveraging subscription business models, and consumers have embraced the changes and demonstrated a willingness to pay for great content and services beyond games.”