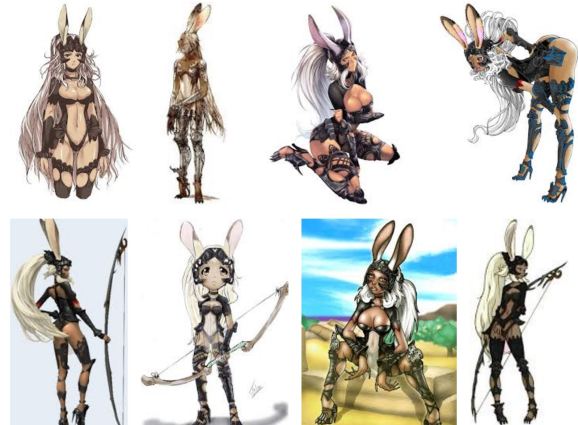 The Viera race that appeared in Final Fantasy XII.

Look, you just can’t have bunny women who dress in lingerie in a video game without putting them in high-heel shoes. That’s just nature. And Square Enix would never screw with nature when it comes to its Final Fantasy games.

The Viera, a race of tall women with rabbit ears who wear thongs to protect themselves in battle in Final Fantasy XII, are not in the massively multiplayer online game Final Fantasy XIV because of their choice of footwear, according to a Finder interview with producer Naoki Yoshida. It turns out that Final Fantasy XIV’s engine struggles to portray character feet in angular footwear, and this has prevented the developer from bringing Viera into the game so far.

But Yoshihda is not saying it will never happen.

“I don’t think you should give up hope,” said director and producer Naoki Yoshida in an interview with Finder. “I mean we’re hoping Final Fantasy XIV will have a very long lifespan. With that being said. [The Viera race wears] a very high-heeled [shoe] and trying to depict that in Final Fantasy XIV is challenging. They won’t be able to wear any shoes that exist in Eorzea right now.”

Now, I don’t want to shock anyone with what I’m about to say, but … what if the Viera just wore different shoes? I know that would look horrendous, and I wouldn’t be able to see one in non high-heel boots without barfing and gouging my eyes out. But maybe some people would be fine to play as a bunny girl in flats or Birkenstocks or something.

But, of course, that’s crazy. And I’m glad we have Square Enix to protect us from the sight of a race of nearly nude ladies in anything but a pair of 8-inch stilettos. Someone has to.