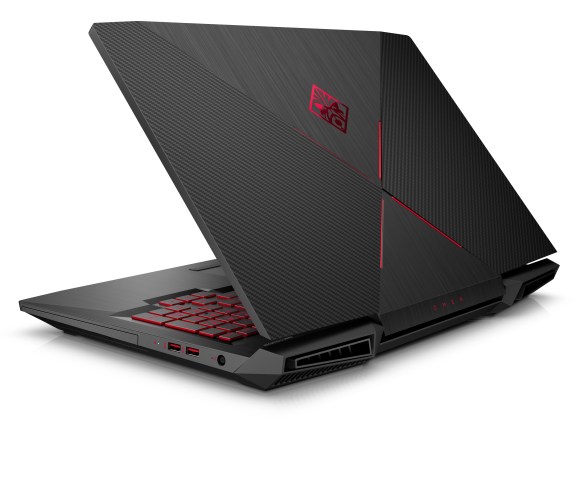 Hewlett-Packard is giving its Omen gaming hardware a boost with its next-generation laptops and desktop computer.

In a press briefing call on June 2, HP’s chief technologist Mike Nash emphasized that expandability and upgradability were big priorities in the latest updates. Both the new Omen 15-inch and 17-inch laptops feature single access panels, and the Omen desktop now will have access to inside the chassis without the use of tools. With maximum specifications, the Omen 15 will be $1,600, and the Omen 17 will be $1,800. The Omen 15 will have graphics cards of up to Nvidia GTX 1060 or AMD RX550, and the Omen 17 will have up to Nvidia GTX 1070 or AMD RX580. Both reportedly have improved thermal performance with twice the number of fans as previous models.

New Omen Command Center software will act as a hub where users can customize keyboard configurations and backlighting, as well as overclock PCs and change app prioritization.

“About three-quarters or 70 percent of users say they use at least three different applications to manage their gameplay experience,” said Nash. “64 percent of users experience latency issues, and only 14 percent of those customers use a solution to solve it.” Nash said that about 20 percent of their users overclock their PCs. With the Command Center, HP hopes that it will be easier for anyone to adjust their settings.

Anticipating more growth in the virtual reality gaming space, both laptops are now VR-ready, whereas in the past only the Omen 17 was. Game developers are still enthusiastic about VR, and HP reports that 76 percent of all VR content is games. Last year, it released a backpack holster as a way to provide a more immersive, wireless experience.

In addition to upgrades to its notebooks and desktop PC, HP is also updating peripherals, including an adjustable-weight mouse as well as additional 25-inch and 27-inch monitors — starting at $280 and $800 respectively — to its current roster of displays. The new 25-inch monitor is a FHD display with a 144Hz refresh rate and 16:9 aspect ratio, and features AMD FreeSync Technology, which is supposed to prevent it from dropping frames. The 27-inch monitor is a QHD display with a 165Hz refresh rate as well as a 16:9 aspect ratio, and instead features Nvidia G-Sync support.

For users who don’t own an Omen gaming computer, HP is releasing the Omen by HP accelerator, which is an external GPU and storage add-on that connects via a Thunderbolt cable. A starting price of $300 includes the accelerator and its 500-watt power supply, but HP notes that later on they will offer storage add-ons of 1TB 5400 rpm HDD, 1TB 7200 rpm HDD, or 256 GB SSD, and graphics card add-ons of Nvidia GeForce GTX 1070, Nvidia GeForce GTX 1060, or AMD Radeon RX 580.

HP currently offers two categories of gaming hardware: Omen, which is targeted more at what it calls “performance gamers” who care about maximum performance per dollar; and Omen X, which is targeted at “enthusiast gamers,” who place importance on cutting-edge performance. HP announced that it has partner with Blizzard Entertainment for the Overwatch World Cup this year, providing Omen X desktop computers for all events.