Ninja Theory announced that Hellblade: Senua’s Sacrifice will debut on the PlayStation 4 and PC on August 8.

Expectations are high for the ambitious game, which features realistic graphics for the body movements and facial animation of its main character, Senua. It is also interesting because of the story about the Celtic warrior, who is dealing with the personal and real demons of insanity.

Preorders are available now for the midsized game, which is $30 and is only available as a digital download. Dominic Matthews, a product development “ninja” at the Cambridge, England-based company, said in the video that Hellblade is an independently produced game that was built with just 20 people. 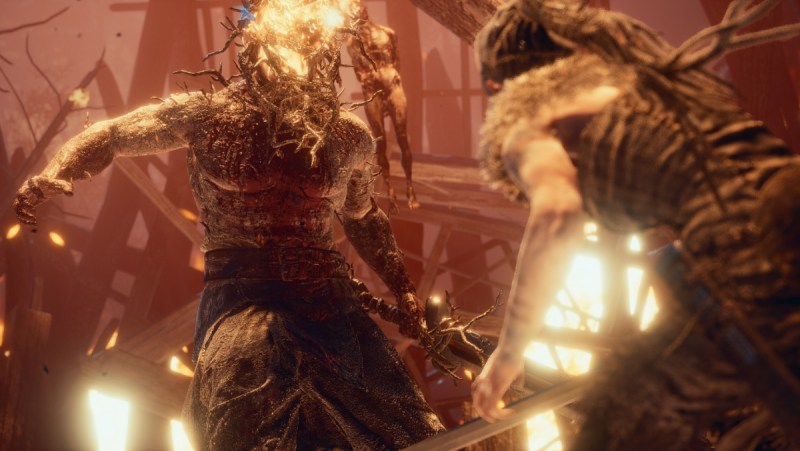 Above: Hellblade: Senua’s Sacrifice is about insanity.

This kind of realistic treatment of insanity is a topic that video games haven’t often touched, and that is one reason why Ninja Theory went the indie route. Ninja Theory said that Senua is a complex and captivating lead character whose journey is heartbreaking, inspirational and revelatory.

Hellblade: Senua’s Sacrifice comes from the makers of Heavenly Sword, Enslaved: Odyssey to the West, and DmC: Devil May Cry. The game is supported by Wellcome, a British global charitable health foundation, and created in collaboration with neuroscientists and people who experience psychosis.

Above: Is it all in Senua’s head?

Last year, Ninja Theory and Epic Games created an awesome real-time demo of Senua. The game studio showed off an amazing demo of real-time performance capture of a live actress at Epic Games’ briefing at the Game Developers Conference 2016 in San Francisco.

In the demo, actress Melina Juergens played Senua in real time. As the actress’ facial movements, speech, and image were captured in real-time, they showed up on the big screen as Senua, the character in the game. The actress spoke in real time, and the voice was transformed into an echoed voice of Senua. Every time the actress blinked in real life, the character blinked in the animated world onscreen. When she spoke and screamed, the character did, too. And when her eyes watered up with emotion and fear, the same happened to the virtual character. It was highly realistic.The demo was built in seven weeks using tech from Ninja Theory, Epic Games, Cubic Motion, and 3 Lateral. It was a nice demo, but the real-time part isn’t going to be in the game. Still, I look forward to seeing the animations of Senua’s face.

The PC preoder will come with a small digital comic book, Hellblade: Senua’s Song. It’s writer is Hellblade creative director Tameem Antoniades, and the art is from award-winning artist Ben Templesmith. Valiant Entertainment is publishing the comic. The comic takes the form of an epic poem.